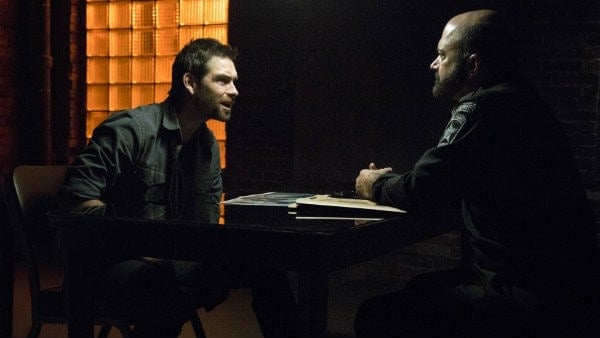 Last week’s “Job” appeared to be righting the Banshee ship after a shaky pair of opening episodes, bringing Job back into the fold with a tragic, poignantly ironic story of his rescue. The back-to-basics approach of character study, action set pieces, and visually stimulating sequences provided a feast of classic Banshee – unfortunately, this is not the case with “Innocent Might Be A Bit of A Stretch”, an episode that fully highlights the most troubling elements of this abbreviated final season, setting the stage for the show’s final four episodes in less than thrilling fashion.

There are a few bright moments to enjoy in “Innocent”, and its there where the show’s heart can still be felt: Job dealing with the trauma of his lengthy imprisonment and Bunker’s quest for justice with Carrie help ground Banshee back in the present a little bit, rather than teasing the vague notions of what’s to come or building out the stories of Agent Dawson and the Aryan Brotherhood. Banshee‘s always been a show that brazenly wore its emotions on its sleeve, and its coy teasing of Dawson’s idiosyncrasies and the brewing family drama of the Brotherhood leaders (and former leader) and where those might be heading are nowhere near as compelling as other stories Banshee has taken on in the past. Even for Banshee, these stories feel cold, with an emotional distance that doesn’t fit with the deeply personal, rewarding material found in smaller pockets throughout the episode.

Instead, “Innocent” mostly serves as a hour of re-arranging pieces on the board, inter cut with scenes building out the most troubling, disappointing turn of Banshee‘s fourth season. The serial killer/devil worship couple make their physical debut in this hour, torturing and cutting up a naked girl for some devilish ceremony, which apparently also involves a cult of other people, and a whole lot of bloody, flagrantly exploitative violence that exists for nothing but shock value. Banshee‘s spent three years exploring the gray areas of human morality, much in the way Hannibal did – a parallel that becomes more apparent given where this season of Banshee has quickly headed. Yet Hannibal used its killers to reveal truths in its core players: what does this implant-rocking couple offer in any way, shape, or form to the Banshee narrative, or its characters? “Innocent” offers no compelling reason; and the more and more it becomes prominent in this season’s proceeding, the more troubling it becomes.

This includes Eliza Dushku’s introduction as the shady Agent Dawson, who comes packed with a sense of authority and meth addiction that feels pulled right out of Prison Break or Sons of Anarchy or any other number of shows with similar “cops with addictions” stories we’ve seen in recent years. Is this how Banshee wants to begin building out its final major addition to the cast? I’m not saying Rebecca died for this – but she kind of did, and the emotional chasm between her character (who shows up so briefly in this episode, teasing Proctor in a flashback by banging some scuzzy looking drug dealer) and the first glimpse we get of Dawson is enormous, and not breached in any sort of promising light in this episode.

Calvin’s suffered from the same problem this season: as this year’s race-themed antagonist, Calvin’s suburban anger and princely arrogance feels like such small potatoes for what Banshee‘s produced in the cast. Sure, he’s about to explode on his former leader/father-in-law, but once his anger spreads to Proctor, Bunker, Carrie, and the like, it feels like this story is pre-destined to be engulfed by the serial killer story, and whatever happens to Hood, Proctor, and the rest of the remaining, living main characters.

Anything is possible of course: maybe Banshee cuts the serial killer story off at the knees next week, and moves into its other stories for the final three episodes. But what really is left? Carrie’s quest for vengeance? Job’s healing, which clearly will not pass in the course of these final four hours? Again, Banshee has always put its card face-up on the table, but season four has been anything but clear about what its priorities really are. But while we may not be able to see where it’s going, we can observe how it’s getting there: and so far, Banshee‘s ambitious time-leap and divergent style of storytelling has been a pretty significant letdown from the highs of the three seasons preceding it.

Banshee Season 4 Episode 4 Review: "Innocent Might Be A Bit of A Stretch"