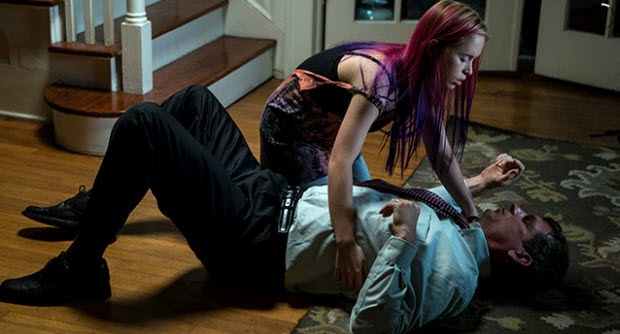 With Banshee‘s version of a Valentine’s Day episode airing last week, “Armies of One” is a marked return to traditional Banshee storytelling punctuated by fists, bullets, and ornery comments by many of its main characters. It’s also a little bit more than that: “Armies of One” is a perfect example of the new standards Banshee has set for itself in season two, using its love of nudity and violence as nihilist punctuation, rather than its primary focus. It gives every action more weight, every character exploration a bit more impact when the other, bloodied shoe falls in the episode’s climatic moments – and although “Armies of One” isn’t exactly becoming ‘deep’ television (thankfully), the major changes in the show’s core formula make this episode (and the season as a whole) much more intriguing – and ultimately, rewarding.

There are moments where “Armies of One” fumbles – the exploration of the Hopewell family’s decline is quite rough around the edges trying to detail the plight of a heartbroken Gordon, burying his problems in cigarettes, hookers, and the always-potent cocktail of unidentified pills and alcohol. It never really focuses on him enough to make any of his behavior feel like it matters: he’s mad at his wife, and is taking it out on her, his colleagues, and his children, talking about how he’s losing control without showing us actually struggle to maintain it. For all we see, Gordon is embracing this life of debauchery: it’s only when his kids see him arrive home wasted late at night (who made dinner for these poor kids??!!) that he actually feels sorry for anything he’s done.

It makes him a pathetic, one-noted character next to others like Lucas: when “Armies of One” is exploring the many different venues of the man Lucas could’ve become in life, it takes on a fascinating quality of something akin to A Christmas Carol in its existential exploration. Does Lucas wish he could be Jason, young enough to run away from a small, life-threatening mistake before it spirals out of control? He throws $50,000 of his own money into the deal with Brantley’s people in order to protect the escape he was never given, the second chance at starting over Lucas was never willing to take himself.

Or does he wish he was like Quentin, Lucas’s English counterpart and con sent to bring back Jason and the $62,000 he stole? Quentin is willing to live and die by the “code” he lives by: despite the dark things he does, he is a man of (questionable) honor, one who not only respects the craft and business of money, but willingly embraces the violent activities that come along with it, including his own death. Lucas often appears to live by the same philosophy, but this season in particular’s humanized Lucas to the point where we can see it’s a carefully maintained farce, a fist-swinging facade that Hood’s always wanted to run away from, the rabbit being led by a carrot held by Rabbit, the dark lord over the many, many skeletons resting in Hood’s closet (and the woods of Banshee, PA). Lucas doesn’t want to be Quentin anymore – but he also can’t be Jason, attempting to embrace a new life and identity in a part of the world where he’s forgotten. Even the most vile, self-serving creatures like Kai have hearts, don’t they – and Lucas did 15 years listening to his, so it makes sense he’s so reluctant to give it up, even when the walls are closing in on him from every corner (Rabbit still lurks, and now Brock is staring to grasp the smell of Lucas’ BS).

Rebecca and Ana find themselves at a crossroads with their identity, t00 (more on that idea of crossroads in my random notes below): Ana’s in a coffee shop dreaming of how things used to be, and Rebecca’s trying to impersonate Kai and understand what it’s like to feel power (which of course, has very dire consequences for poor ol’ Jason, who couldn’t keep his pants above his ankles for twelve hours before heading north to the magical, safe lands of Canada). However, these stories don’t work quite as effectively. There isn’t a lot of room for them to gain traction: both Rebecca and Ana are portrayed as women unable to influence their own situations (despite a brief moment of mother/daughter bonding), both of them victims of their own mistakes in ways Kai, Gordon, and Lucas often don’t find themselves (or Sugar, who can just blast fools away with no regard, in the eyes of the Banshee PD – what a perk to owning a local business!). Ana and Rebecca’s situations deny them the ability to truly affect and change their environments: and outside of “Armies of One” allow them brief respites where they aren’t completely shrouded in shame and fear, it never really allows them to be the ‘army of one’ the title purports them to be.

However, their presence in this episode doesn’t suggest they’re both totally powerless moving forward: both: Ana has more working in their favor to better their situations than say, Alex Longshadow, who partners with Kai a last-ditch effort to save his position of power within the tribe (painting his face in red neon lights in the process, a clear sign of Alex embracing a dark side he doesn’t wish existed, almost as Lucas is failing at trying to avoid the same thing). Ana’s connection to her daughter and the crumbling of Gordon’s mental state at least give her a foundation to stand on, while Kai’s reduced Rebecca’s influence to her looks, a pretty toy he likes to stare at on the shelf and toss around Banshee as he sees fit. The focus on both of them in the episode suggests a parallel being drawn: two women who feel increasingly cornered are bound to fight back, even if it takes one (I’m looking at you, Rebecca) a long time to start realizing it (and when she does, misguidedly tries to attribute it to some kind of power, imitating Kai’s behavior with one of his dancers as she “seduces” Jason).

As a whole, “Armies of One” is a microcosm of the show’s evolution, even with the occasional stumbles (not too dissimilar to Gordon’s) along the way: the pulpy elements remain (this is an hour where a man in a signature Jaguar shows up, and subsequently has his head removed by a jack-knifing tractor trailer, after all) in abundance, but they’ve been supplemented by a more nuanced approach to character, even those a little more one-dimensional than Lucas and Ana (like Sugar and Brock). It’s subtle, and not always effective, but it’s added a new layer that Banshee‘s first season lacked, a sense of humanity underneath all the madness the show’s made its addictive trademark.

– anyone else find it weird how attached Siobahn is getting to Lucas, even as he continuously gives her the cold shoulder? It’s bordering on weird, and it makes her more than a little off-putting, considering how little else we know about her personality to this point.

– every single driving school vehicle in America has a passenger-side brake: Deva’s little stunt would’ve never been able to happen in real life.

– Quentin, to Lucas: “We’re all something else once upon a time, aren’t we?”

– my favorite shot of the episode might be the series’ single best image: when Lucas meets Quentin at the bridge, the shot frames both men underneath two intersecting metal bars of the bridge, a visual symbol of two men made from the same ‘elements’, coming together for a brief moment, thanks to the almighty power of money (the spot the two bars intersect is directly aligned with where Lucas places the brown bag on the bridge ledge). Just a fantastic shot.

– Job drops a bomb on Lucas in the closing moments: turns out Lucas didn’t go to prison for fifteen years for stealing jewelry. Rabbit’s been after him all along for taking away his daughter: the jewels were nothing but glass. It gives Lucas’s interactions with the therapist in last season’s “A Mixture of Madness” context, a reminder that nothing about what is happening between Hood and Rabbit is professional – it’s all personal, baby. It’s a ridiculous little plot twist, but a fun one (especially when it’s Job delivering the news). 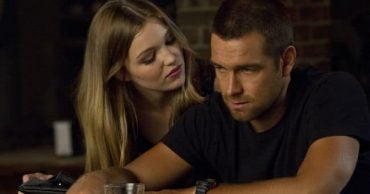 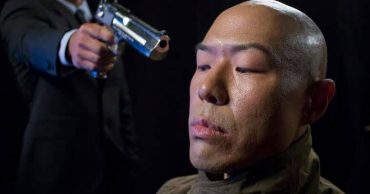 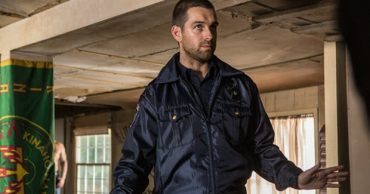 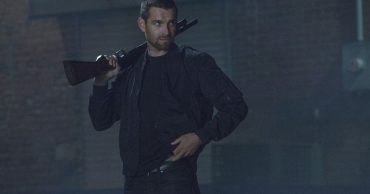 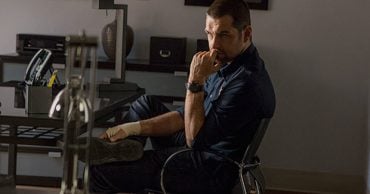 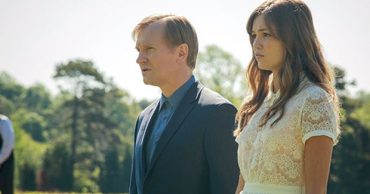