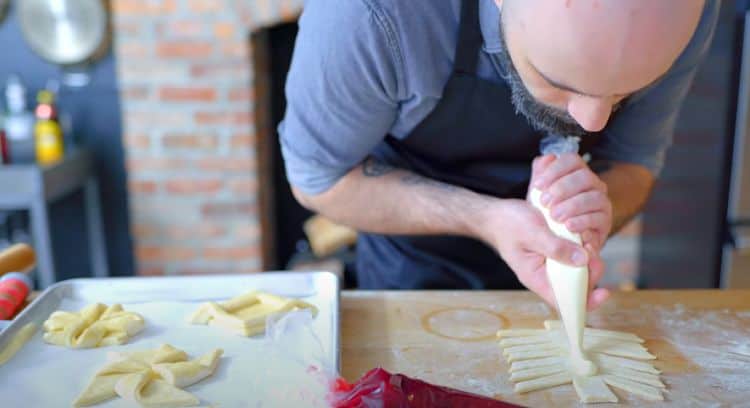 It does feel as though chefs that know how to make a good danish might look at the store-bought stuff and just shake their heads, but oh well. People love eating sweets, and the store-bought danish is usually sickeningly sweet at times since if there’s one thing any food manufacturer knows, it’s that adding sugar is going to make people keep buying. Well, maybe for some folks at least. But watching Babish make his danishes is actually kind of soothing in a non-creepy sort of way and it does tend to make a person wish that they were a little better in the kitchen and possibly that they had the size of kitchen and tools that Babish uses to try some of this stuff. Of course a lot of people might state that all you really need is the desire and a few tools to start with, but don’t tell that to a gourmet baker, they might take offense to it.  When comparing the danish, or ‘fancy pastry’ seen in Ant-Man and the Wasp though a real danish is by far something much fancier and a lot more flavorful since the preservatives and loads of sugar in the store-bought stuff are basically for taste and for appearance since otherwise there’s not much else to it. But huh boy, trying to make a danish for the first time is probably going to be a messy proposition for a lot of people since it does take some practice and it does require a lot of patience no doubt.

Babish is definitely a talented individual since some people are great cooks and others are great chefs, but it takes someone of exceptional talent to be this good at both. If asked he might be humble and state that he does his best, and it’s true that he likely makes mistakes just as much as others do since being human carries that burden. But the fact is that for his show he makes some truly interesting foods that a lot of people are in awe of since they happen to be insanely impressive. The fact that he has so many themes for his foods is great since he does regular meals as well but those that have pop culture themes and backgrounds are awesome since there’s no way that some of them are given a serious attempt by a lot of people, largely because they defy common sense at times given that they’re either not entirely edible or they look as though they’d take a seriously long time to perfect, such as the sweet rolls from Skyrim, or the crayon sandwich from the Simpsons (don’t eat that one, please). But pretty much everything he’s done to date has been great and to be certain, if you really want to try out his recipes, he does have books that are available and no doubt count down to the gram how much of whatever is you need goes into each recipe. Tell me your mouth isn’t watering thinking of all the good stuff you could try making, I’ll wait.

Some of the stuff that Babish has presented has definitely looked good enough to try and make on your own, while some of it is a bit of an oddity since he does take straight from pop culture and tries to stay as faithful to the recipes as possible. But then there are those that wouldn’t be entirely feasible so he makes pretty accurate substitutions that turn out to work just as well. Since first learning about Babish it’s been great to get to write about him every so often since it’s the type of moment that brings a smile to my face largely because Babish is fun to watch and his recipes are great to think about since if a lot of us were any better in the kitchen we’d probably do what we could to purchase what we need for each recipe and likely even extend our kitchen as much as possible in order to make this work. Now if only extending one’s house outward didn’t cost nearly half what the house was worth. But there is one caveat, and that’s the fact that anyone trying to make all of these delicious recipes might need to share them with others or have a decent workout regimen, since very little of what Babish does is what’s considered health food, as these are very rich and very tasty meals and treats that he’s doling out the recipes to and consuming a lot of them on a regular basis might force you to invest in sweatpants after a while, or hit the gym more often since burning off the calories that come with these meal is bound to take a while. All in all though, Babish is definitely one of the best parts of the internet.