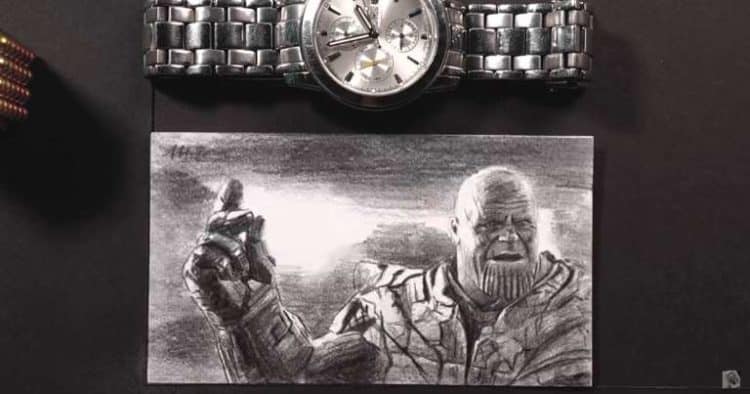 A lot of people create the simplest flipbooks they can manage, but this artist went on to create around 1,400 images that came straight from Avengers: Endgame and had to do with Thanos and Iron Man and their two most epic fights. And to be honest, the sketches that were used for this project are nothing short of brilliant since they give a very raw but interesting look at the scenes they depict as fans are given a different version of these movie moments to enjoy. But the time it takes to create these images, yikes. Looking at the amount of detail that was put into each one of them however it’s not too surprising to think of how long it must have taken to sit and shade in each picture just perfectly in order to make it match with the one that had come before and the one that would come after. That attention to detail is unbelievable really but it’s greatly appreciated since the effect comes off perfectly as it did in the movie. It might not be what the artist was thinking about, but it’s very likely that if the individual wished to sell these, or copies of them, that they would fetch a rather handsome price, not to mention that their value would be increased due to their collectible status. It’s difficult to say if such a thing would happen outside of a private auction that would likely include thousands of dollars and might be for one series per auction, which would be a shame since it does feel as though they should be sold together if that ever happens. But seriously, as an artist, it’d likely be better if the individual kept the entire thing and let it appreciate if it can.

It almost feels as though Thor should have been the powerhouse to take on Thanos in the Infinity Saga since the Norse god of thunder is without a doubt one of the most powerful Avengers, but since the MCU was essentially kicked off by Iron Man it was bound to be Tony Stark that would end things. Added to that is the fact that RDJ has been a much more forceful and present character in the Marvel universe at this point when it comes to the movies, while Thor has had his own arc, but at the same time hasn’t felt quite as important at times. If anything he’s been the brawn behind the brains when it’s needed and was kind of late to the party when Infinity War really kicked off in Wakanda. Among all the ‘ifs’ that still appear in the Infinity Saga is the big if that would have occurred had Thor showed up before Thanos had killed Vision and taken the Soul Stone, since with the Infinity Gauntlet not at full power yet it feels as though an enraged and empowered Thor could have beaten Thanos back a little easier, but then again Endgame did show Thor with both Mjolnir and Stormbreaker and he still couldn’t subdue the mad titan, which is amusing since it means that Thor was seriously underpowered as he has been for a while.

But getting back on topic, Iron Man and Thanos had serious beef with each other from the first time they met, and the game of throwing solid, heavy objects at each other became a bit of a habit until Tony figured that using his technology was the best way to get back at Thanos, and he was right. It was a death sentence, and the artist has captured Tony’s facial features perfectly in this flipbook to show that. There have been mentions lately of whether Doctor Strange, who saw the many different variations of this battle, saw only one in which Thanos lost. But many are wondering if Strange saw more in which the mad titan lost, but Tony ended up becoming more paranoid and building more and more tech until he became the villain instead of the hero. It would make a certain kind of sense considering that Tony Stark did quite a bit of damage with his technology over the course of the movies and the creation of Ultron is proof. But while his mistakes were certainly epic it was his heroic action at the end that really set him apart, but again, for someone like Tony Stark to accept that there was only one possible ending that might have stopped Thanos, it’s a bit of a stretch to think that he wouldn’t have thought this through from every angle. It’s not just his genius intellect that would have helped him on this, but his paranoia in trying to outthink everyone as well.

But at the end of it all this flipbook is incredible and it’s a testament to the patience and dedication of the artist.