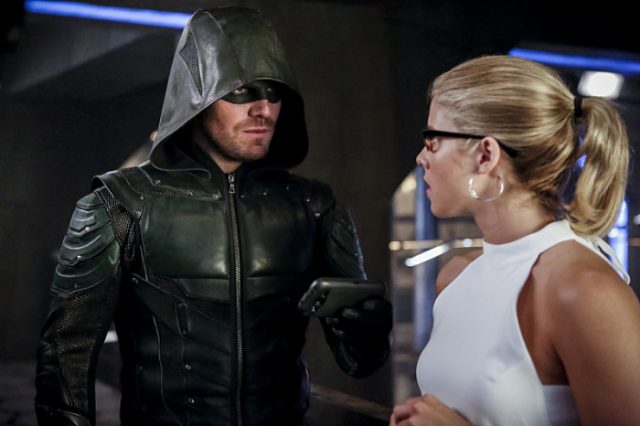 The title of tonight’s Arrow, “The Recruits,” best applies to the episode’s two Oliver-centric stories: his attempts to train the new members of his team, and the task that he and his fellow Bratva recruits have to pass in order to join the organization. Both stories are about trust, teamwork, and leadership and how easily a group or team can break down when one of these three components is missing. A great team isn’t just made up of people who are physically strong and tactically capable; even more important than any type of fighting skills or mission strategies is the bond between the members of the team and the faith they place in their leader.

As Felicity accurately points out in “The Recruits,” Oliver never wanted to be the leader of a team; he didn’t set out to work with a group of vigilantes when he began his crusade almost five years ago, and he only became one out of necessity rather than desire. Following the death of Laurel, Oliver has reverted back to the vigilante he used to be in many ways, including his belief that he must distance himself from others. This method doesn’t come from Oliver wanting to keep his real identity a secret, or because he truly believes that beating down and discouraging these new recruits is the best way to prepare them for the streets of Star City. No, Oliver’s mentality here comes from fear and loss, not only the death of Laurel but the departure of both Thea and Diggle. He allowed the three of them to get to know the real him, to see him at his most heroic and his most vulnerable, and it helped them become a family. But with family comes pain and heartache, and that’s not something that Oliver is willing to take on at first, so he reverts back to his old, selfish ways, looking to the Bratva’s philosophy of no personal connection as an example of how to best train the up-and-coming vigilantes.

And it’s not Curtis’s justified rant or Thea’s advice that changes Oliver’s mind about the situation. As has been the case for seasons now, it’s Felicity who is able to get through to him, because she knows him better than anyone. She doesn’t just talk to Oliver about his shortcomings, about how he’s failing this new team as a leader right now, but she opens his eyes as to why Team Arrow used to work so well before. It wasn’t because Diggle was a soldier, or because Thea had been trained by Malcolm Merlyn; sure, their abilities may have been stronger than those of Evelyn, Curtis, and Wild Dog, but that’s not what made them such a formidable force. Team Arrow’s real source of power came from trust and respect, not only in themselves but in Oliver, and that’s because they were able to see what Felicity saw when she got to know the real Oliver Queen. They were able to witness his passion, determination, and need to help the city, and it made them want to fight alongside him.

The problem is that Oliver Queen is a broken man, a person so dismantled by all the heartbreak he has experienced over the past year that he retreats behind the symbol of the Green Arrow. However, thanks to people like Felicity and Curtis and even Star City’s newest vigilante, Ragman, Oliver is beginning to piece himself back together. He’s starting to believe again that he can fulfill the legacy of his father, the man who took his own life so that Oliver could survive. And when and if that belief comes back fully in Oliver, it won’t matter how “green” the team surrounding the Green Arrow is, because Oliver Queen will be their leader, and when Oliver Queen is at his best, he can inspire anyone.

Oliver struggles to train and inspire the members of his new team in a fantastic episode of Arrow.