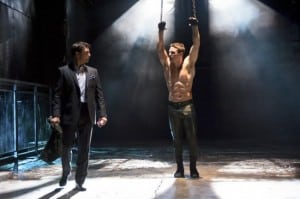 With an ominous title of “Sacrifice”, is it any wonder that the season 1 finale of Arrow was so dramatic and had such high stakes?

Confrontations. Malcolm strung up Oliver after capturing The Hood and the two had a back-and-forth that primarily involved Malcolm telling Oliver that his own quest lacked conviction and that’s why he kept losing to him. Fortunately, Oliver was able to free himself after Malcolm left and was soon rescued by Diggle. Felicity, meanwhile, was happy to hear about Oliver’s rescue, but her trip back to the batcave was interrupted by Lance, who brought her in for questioning about her hacking activities. The interrogation was interrupted by a call from the Hood, who warned Lance about the device.  When Lance told his fellow officers that they needed to help The Glades, he was forced to confess how he had been talking to the Hood for several months and was suspended by his lieutenant. Tommy and Oliver also had an unfortunate confrontation where Tommy told Oliver that he had spotted him kissing Laurel and Oliver tried to impress upon his friend the real urgency of the situation: Malcolm’s Undertaking. Tommy refused to believe his friend about his father’s cruelty and left. Oliver then headed home to confront Moira about the Undertaking and asked her to help him stop it. While she insisted that she had done everything in order to save her children’s lives, he told her that that would mean nothing if she allowed the Glades to be destroyed and confessed the truth about his father’s suicide.

Exposing the Truth. Tommy returned to his father’s office to tell him about Oliver and Laurel and Malcolm used this opportunity to tell him the truth about destroying the Glades and played him the voicemail his mother left the night she died. While Oliver, Felicity and Diggle tried to figure out where the device would be placed, Thea called Oliver to tell him that their mother had called a press conference. Moira confessed her part in the Undertaking and revealed the plan to destroy the Glades and attributed it to Malcolm as well. She also told everyone in the Glades to evacuate. Thea was horrified by her mother’s confession and told her that the boy she loved (Roy) lived in the Glades. Before Moira could chase after Thea, she was arrested. Back in his father’s office, Tommy was alarmed by his father’s plan. As the cops came in to arrest Malcolm, he grabbed his weapons and slaughtered them and knocked out Tommy on his way to activate his plan.

On the Island. The island scenes were brief, which made sense given all the drama happening in Starling City, but essentially Oliver proved himself by stopped Fyers’ missiles. Unfortunately, when he finally met up with Slade again the two of them had to face off against a Fyers who was holding Shado hostage. In order to save her life, Oliver shot and killed Fyers, also destroying his chance to get off the island. 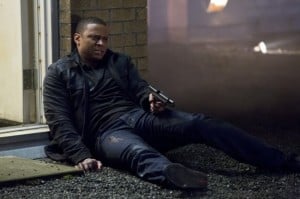 The Plan. Back in his hideout, Oliver laid out the plan: he would go after Malcolm while Diggle would disarm the device in the old subway tunnels. But Diggle refused to let his friend go alone, so Plan B was put into effect and Oliver called Lance to tell him that Felicity would walk him through disarming the device. Chaos reigned in the Glades as Roy finally heard about the evacuation on TV and went outside to see the authorities trying to get everyone out. He also spotted Lance breaking into one of the old subway tunnels. Oliver and Diggle headed to the Merlyn place and found Tommy unconscious on the floor. Oliver told his friend to get to safety as they found Malcolm’s own batcave behind a false wall and confronted the Dark Archer there. Diggle was stabbed and Oliver took off after Malcolm.

A Race Against Time. Lance finally found the device and Felicity tried to talk him through disarming it as Roy tried to help people getting caught in the chaos of the rapidly-emptying Glades. Thea found him and the two hopped into a car to get out of the area, but Roy stopped to help some other people. He told Thea to go on as he remained behind and she told him he needed to get himself out quickly. As Oliver and Malcolm had a wicked fight on the roof, Lance seemed to activate an anti-tamper safeguard. He realized there simply wasn’t enough time and called his daughter to tell her to get out of the Glades. Laurel quickly realized that this was her father’s goodbye and he told her she needed to get on with her life. On the roof, Malcolm managed to get Oliver in a chokehold, but Oliver stabbed him through with an arrow. He didn’t kill him, but he definitely hurt him as Diggle joined him on the roof. In the subway, Lance managed to disarm the device and Oliver relayed the news to Malcolm. But Malcolm had a “redundancy” plan in place and Oliver realized there was a second device. That one went off and a terrible earthquake rocked the Glades. Laurel was, unfortunately, still trapped at work and didn’t heed her father’s advice and while her friend got out of the building, Laurel got knocked out.

The Sacrifice. As Laurel was trapped beneath a piece of concrete, Oliver was racing to save her. But Tommy got to her first and said “I love you” as he managed to work her free. He said he was right behind her, but the building came crashing down before she saw him get out. She was hugged by her father, who also rushed over to safe her, as she cried for Tommy. Oliver managed to get in the building, but Tommy had a rebar through his chest. Tommy apologized to his friend for his anger and his jealousy and then died. As Oliver cried over Tommy’s body, sobbing “it should have been me”, the camera pulled back to show the audience a crumbling portion of the city. Fade to black.

Arrow has already been renewed for a second season and will return to The CW in the fall.