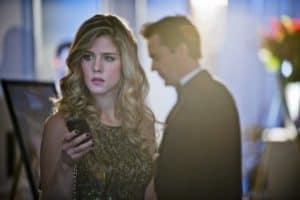 Felicity’s first outing with Oliver and Diggle nearly ended in disaster in this week’s Arrow, showing her that getting involved in this vigilante business is no walk in the park.

The Three Musketeers.  Felicity has officially joined Oliver’s little crime fighting group, but cracks between the trio sprung up in the first few minutes of the episode.  It appears that Felicity doesn’t necessarily agree with Oliver’s vigilante ways, particularly some of his targets.  Instead of just focusing on those on the list, she suggests that he branch out to target those who deserve his attention.  When a new jewel thief named the Dodger makes his way into Starling City, he caught the eye of Felicity and her cohorts.  To get information, Oliver bugged Detective McKenna Hall’s phone at the precinct and asked her out on a date.  Unfortunately, when the cops, and Oliver, finally tracked down the Dodger, he managed to escape.

A Deadly Necklace.  When the Dodger slipped through the Arrow’s fingers, Oliver decided to come up with a jewel display at a charity benefit to lure the thief into a trap.  Unfortunately, the Dodger managed to turn the tides on their plan when he stole the broach and then put a bomb necklace on Felicity.  As Diggle remained behind in hopes of disarming the bomb, Oliver took off after the Dodger.  Fortunately, Oliver used a neat trick to get the detonator back from the Dodger and knocked him unconscious.

Purse Snatch.  While having lunch with Laurel, Thea was the victim of a purse snatching.  She proved her resourcefulness by tracking down his name (Roy Harper) based on a wallet chain he had left behind during his escape.  After calling on Laurel’s father to arrest Roy, she decided not to press charges when Roy confessed that he was stealing to help his mother who had been hooked on the drug Vertigo. Later, when Thea went to Roy’s house to retrieve her purse herself, he courteously returned it, but warned her against believing “sob stories”.

Trying to Escape.  Moira’s recent losses have prompted her to try and leave the Undertaking.  She invited her old friend and fellow Undertaking member Frank to the Queen mansion to remind him that they had originally started this group to clean up the Glades, not to destroy the city.  After the price that both Robert and Walter have had to pay because of the Undertaking, she no longer wants to be a part of it and asked for Frank’s help in getting out.  Frank agreed to help, but warned Moira that they could suffer serious repercussions from this move, particularly when Moira wanted help in finding Walter.  In a surprising move, Moira asked China White to kill Malcolm for her.

On the Island.  With Slade injured and ill from a bullet wound to his arm, Oliver decided to head back to Yao Fei’s cave to retrieve his healing herbs.  But when he arrived there, he found a beaten and broken stranger: Alan Durand, who claimed to be an exchange student who washed up on the island with his class.  But it was clear that Oliver was wary about Alan from the moment they met, despite his bloody appearance and story.  When the man begged for help, Oliver refused and walked away.  Fortunately for Slade, he was able to save him, but Oliver definitely lost a huge part of himself with the choices he had to make on the island.

In next week’s episode, Deadshot returns and the Merlyn family becomes a target.  Watch a preview below for the February 27 episode of Arrow on The CW.