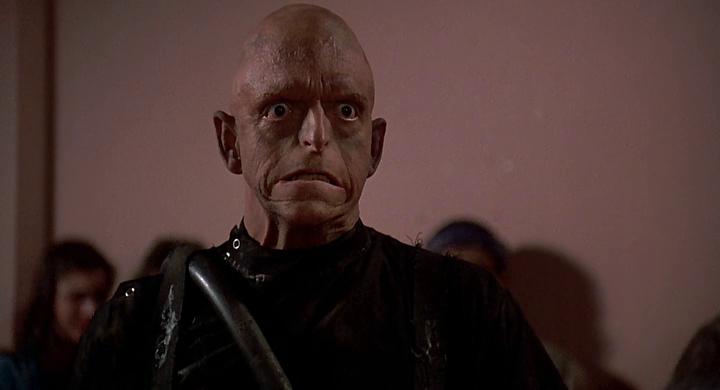 When you look at Michael Berryman you might think he’s wearing more than one prostheses for one role or another, but the truth is that this is the way he looks at all times. He is unique in many ways since you don’t see a lot of people that share his appearance in film, but this has also led to his being one of the most recognizable faces in Hollywood. It’s also kind of led to him being typecast as the big, scary-looking guy since he stands about 6’2″ and is kind of imposing in stature. But honestly when he sits down for interviews he seems like a very stable and kind individual that has obviously had some issues in the past with bullying due to his appearance. Apparently though he didn’t react in anger to the kids that teased him but went up to their parents and told them that their kids were brats. That seems rather calm for someone that was no doubt teased mercilessly about his appearance as only kids can do, and it reaffirms that he’s the kind of guy that doesn’t just fly off the hook at anyone that sees him as different.

Berryman was born with Hypohidrotic Ectodermal Dysplasia, a condition that left him without hair, fingernails, teeth, or sweat glands. Yes, he obviously has teeth, so it’s unknown if he was born with them, they grew in eventually, or if he has false teeth, but honestly it doesn’t matter. What does matter is that out of so many people in Hollywood he’s always been one person that’s been very easy to recognize. What’s even more obvious is that he’s used this condition, or rather, his acceptance of it, to land some very interesting roles in his time. If you really look back at his career he’s done quite a few things that have cemented his legacy in show business as one of the scariest-looking people in movies but also one of the most memorable. Here’s a couple examples of why he’s so easy to bring to mind.

The Hills Have Eyes

The Hills Have Eyes, the original, not the gore-filled remake that came along decades later, was an intense and unforgiving story about a family that becomes stranded in a lonely desert in Nevada and is preyed upon by a family of cannibals. While the cannibals kill a few of the family members initially they abscond with the youngest member, a baby, with every intent to eat the child. But as the survivors rally and go after the family their dog and the survivors find ways to outsmart, outwit, and simply out-brutalize their attackers, finally regaining the child and bringing some measure of revenge to the attackers as they kill almost every one of them. Berryman’s character, Pluto, is one of the most vicious of the bunch and has no compunctions about killing as he and the others do what they want to the family, no matter how horrible it is. The remake got just as bad, but in a way that went more than a little overboard since it seemed to be all about the gore rather than the story, which for some people was great but for others was kind of overkill in a way that wasn’t needed.

The sheer terror of the film was enough to be honest, but like a lot of films someone felt that they could improve upon it or at least make an updated image of it, and so we got a remake that was something right out of a nightmare that even Wes Craven might have blanched at.

His role in this movie was fairly small since he was part of the biker gang that crashed into the house and started terrorizing the guests simply because Lisa felt that the boys needed a challenge to make them finally stand up and be recognized for who they were. The bikers were notably vicious for much of this encounter and their leader, played by Vernon Wells, obviously enjoyed re-upping on a role similar to his Road Warrior persona for a short time. Berryman however was one of the gang members that got a little physical with the party-goers and was particularly threatening, but his character was so convincing that it was a sudden and complete reversal when Wyatt and Gary managed to back the guys off and force them to leave. To realize that these guys were somehow decent folks that had gotten a little rowdy was kind of eye-opening considering what had just happened. But it made for a great comedic moment.

Michael has definitely had a few challenges growing up with his physical appearance and the way people have perceived him, but he’s made it into a positive part of his life that has allowed him to enjoy a great career.