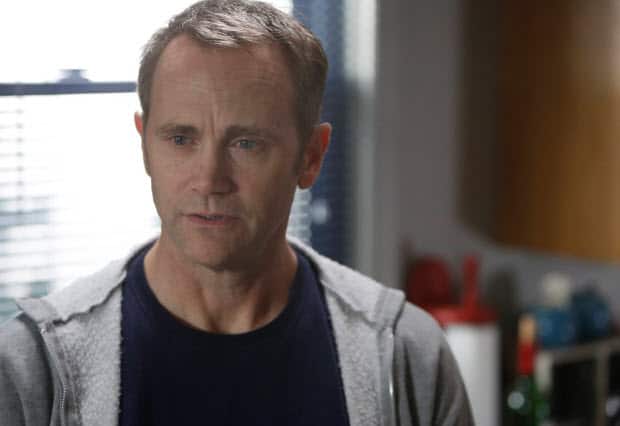 While I would probably argue that The Americans is one of the five or so best series that is airing on TV this spring, I’ve begun to notice a kind of separation in the experience of watching it that differentiates it from some of the other (and better, I would say) shows that it’s competing with, like Mad Men or Hannibal. The issue is this distance The Americans often maintains with its audience. What is happening in any given episode is always interesting, but how we ingest it can make it feel like we’re watching the events from an omniscient, third-person perspective when the more powerful approach would be seeing The Americans through the eyes of its central characters. This actually might be the worst time to bring this issue up, since some of the most powerful scenes in “New Car,” like Larrick killing Lucia, are unequivocally shown through a character’s perspective–Elizabeth in the case of that scene–but I’m beginning to feel less emotionally invested in The Americans despite liking it as much as I ever have and considering this season a noticeable step up from the series’ great debut season.

Director John Dahl does a great job with “New Car” by making those few scenes pop with emotional weight. Apart from what happens with Lucia, one of the most powerful moments in the episode is when Philip, as Clark, goes to see Martha and is prepared to have her listen to the tape that he’s manipulated so that she won’t feel so connected to her co-workers. It’s strange, but I find that I have to constantly remind myself that what’s going on with Martha is one of the worst things on television, if you sit and think about it. This exceeds even Hannibal Lecter levels of manipulation, and if and when Martha ever finds out what the nature of her marriage is, it will absolutely destroy her in the most thorough way a human mind can be dismantled. Philip appears to consider that in the moment, choosing not to play the tape after Martha tries to make amends with the person she thinks is her husband (he even offers to pick up groceries; what a guy). Focusing the shot on Philip’s face in that sequence draws that out in a way that The Americans often chooses not to highlight.

And, really, that makes sense. The Americans is still very much a genre piece in the style of classic spy narratives (John le Carre’s novels, for example). So, it necessarily has to handle its plot with care and attention. Even then, it manages to pull of more and better character beats than any other series in its genre. Yet, when looking at something like the ending of “New Car,” I think some of those attempts to do character- and thematic-based stuff wind up being big swings and misses. For one, Henry hasn’t been much of an interesting figure in The Americans at all. He and Paige had that unusual, intriguing episode last season in which they got accosted by a stranger, but since then, Henry has mostly been used as a device for his parents to worry about if he’s been used at all. I don’t find anything particularly engaging about the fact that he’s gone to the neighbors’ house because no one is around to watch after him, and the heavy-handed parallel being made to Henry saying he is still a good person and how we’re supposed to apply that idea to Philip and Elizabeth is one of the few times The Americans has been lazy in its writing. To nitpick with that scene just a little bit longer, it’s also kind of silly at best and overly-written at worst. If episodes in a season of television can be equated to either short stories in a collection or chapters in a novel, the hurdle is trying to wrap one up so that it feels like a natural ending point without it being too neat. Drawing so much attention to the layered meaning of what Henry is saying does feel too much like a forceful way of ending the episode so that it comes off “important,” however subtle that importance is and however strong Keidrich Sellati’s performance is.

Again, though, stuff like that isn’t making The Americans any less enjoyable each week; it’s simply holding it back ever so slightly from reaching full potential. And in terms of plot-level material, “New Car” excels on nearly all accounts. I especially like that we see Sandra and focus a bit more on what’s going on with Stan, since Susan Miner’s new regular role on the show hasn’t been used all that well thus far. Seeing how far Nina has dug her hooks into Stan, furthered by the polygraph test that she’s passed, makes him a much more sympathetic character. When we see him struggle to even shut the door of his car, his frustration shifts from being mildly comedic to deeply moving. Noah Emmerich doesn’t get many “big” scenes in The Americans–certainly not like in his Little Children role–so when Stan has to occasionally let loose, it’s a good reminder that Emmerich is just as capable of bringing out the power of these scripts as Rhys and Russell are. As tricky and slightly convoluted as the Stan-Nina-Oleg-Arkady section of The Americans is right now, it has created a secondary cat-and-mouse game of shifting power relations that’s been working really well alongside what the Jenningses are up to.

To end on a Jennings note, it’s worth reiterating how great that scene with Larrick and Lucia is, and how it’s just one of many examples why Elizabeth can’t let herself enjoy the life that Philip can by distracting himself with a new car or whatever other part of the American culture he finds some form of solace in. Life for Elizabeth has been anything but easy, and the decision to let Lucia die must have as large an effect on her as the deaths of her comrades at the beginning of the season. It also shows that Elizabeth is right to be the way she is, since Lucia was a good mirror for Elizabeth to see the younger agent she once was, overwhelmed by passion to deal justice. That simply doesn’t get the job done; instead, it gets you killed. What better way to emphasize that point than seeing the life of that former self drained right in front of you?