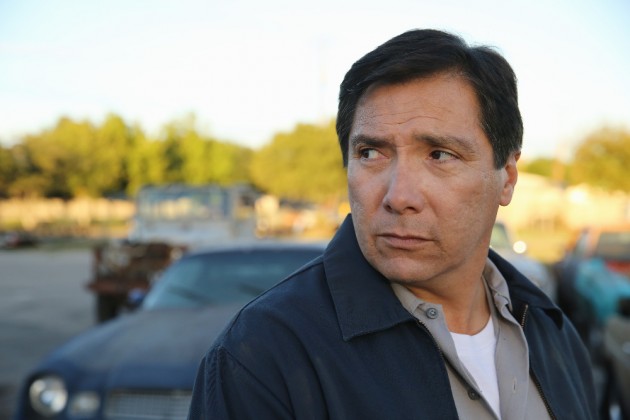 How did Matt Skokie die? This was never the question American Crime was trying to pose to its audience. In fact, I don’t think American Crime really raises many questions at all. Everything American Crime‘s characters have done this season in their quest for truth has been used to twist the typical format of a procedural crime show, which is primarily concerned with the facts of the crime, offering a neat whodunit, and some happy-looking white people at the end. “Episode Eleven” offers no such solace, no such answers to the external facts at the heart of this season’s tragedy. In the end, tragedies don’t get closure or go away; we either move on or we don’t, and American Crime‘s final, karmic-seasoned episode presents no simple truths in either approach.

What’s surprising about American Crime‘s final hour is the presence of hope where all has been lost; even as Aubry lays dying from a suicide attempt (the second of the episode, the first leading to the second), she dreams of a world where her locked door opens and she sees Carter Nix rise from the dead to breathe again. That dream, as misleading as it may be, makes a haunting connection to Russ, whose loss of hope aligns neatly with Aubry’s, as everything he’s fought for all season comes crashing down around him. Gwen goes home with her family (odd she never really became a character in this whole thing, and her parents faded to the background), Mark and his daughter-in-law won’t talk to him, and Barb informs him Gwen’s family is selling the house he just fixed up. The house-building metaphor hasn’t been the most subtle part of American Crime, but it becomes a haunting, evocative image here: those without family are the most hopeless in the world. Russ was never able to build a new foundation on the house rebuilt on its own tragedy, and in the end, it turns out Chekov’s gun was for Russ all along, and not Barb (who finally realizes she needs to “let go,” a hard thing to do knowing you bought the gun your husband murdered someone and himself with).

That thread of family, strong in last week’s episode, really finds its home in the final episode, which offers a surprising amount of catharsis with Alonzo getting a new lease on life (with his family by his side, a wonderful subversion of Latino dramatic tropes), and the touching image of Eve and Aliyah sharing a hug after the news of Russ’s final actions break. In the smoldering piles of the world American Crime presented, it still offered us bits of positivity and hope sprinkled across its bleak canvas; those moments can’t quite escape the horror of Aubry or Carter’s death, but instead of remaining mired in its depressive qualities, American Crime ends with a series of moments that suggest that the world is completely screwed, but with a little luck and some love, we all might be able to survive the injustices of our fellow man.

The thoroughline of all these stories is the quest to get better: everyone at some point expresses their notion to be a better person. Is that possible? Hector, while talking to a potential employer, says he doesn’t feel changed or redeemed; he’s just found purpose in life, people he wants to make proud. Maybe that’s all it takes; a little compassion from other human beings, and it may bring out the best in ourselves. Sure, this stands in direct contrast to the doom and gloom of Aubry and Carter’s story (after all, Carter was trying to better himself, quitting drinking and attempting to make peace with whatever happened that night), but along with Alonzo’s smiling face and Barb finally connecting with her son (though the wife had to get all preachy right there – she really picks the worst times), it ends the series without quite the bleak ending I expected (though for the Skokie, Nix, and Taylor families, there will be no peace).

As flawed as American Crime could be with its melodramatic stories and thinly-realized characters, I’m glad to see this show get a second season under the visage of John Ridley. From the cinematic presentation of the story, to how well Ridley allows room for performance in the most critical moments, American Crime really did offer a different take on the typical crime procedural, an inverse of the laughably saccharine, sanitized worlds of modern-day Law and Order, Blue Bloods, and the like.

Unlike those shows, American Crime offers us no “winners” or ultimate truth outside its tenants of love and faith (in self, in family, in religion; however you want to read it) being the only solutions to a terrible world. However, this cruel, unforgiving world of pain is one of actions and reactions, and does offer the potential solace of everyone ‘getting what they deserve’ – and more importantly, the potential of every single day to get better as human beings, once we learn to let go of that control. And despite all the issues I might have with how American Crime got to that place, I can’t argue with that idea at all.