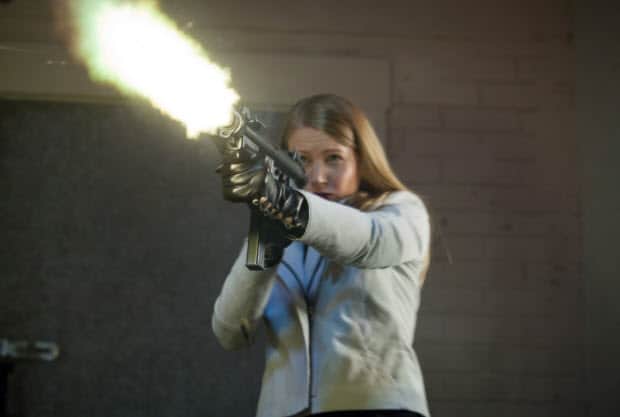 The majority of the time, Almost Human has had a lot of strong episodes with cases which catch your interest. But sadly this week it actually felt weak and it was mostly due to the case that they featured.

Now just to be clear, it wasn’t awful by any means, but it was difficult to get invested in what John and Dorian were investigating. The episode was only enjoyable because of their dynamic, which is essentially the main focus of the show.

The comedy in this episode was more appealing to follow than the case, especially seeing John in, as Dorian called it, “Angry Class 101.”  But what was even more outstanding was seeing John really trying to control himself while that MX was talking non-stop. Maybe John just needs a vacation?

Even though it has been obvious since the start, the romantic sparks between John and Valerie was a bit clearer this week than ever. It’s going slowly oddly enough, especially since they are only five episodes away from wrapping up season 1. Maybe they are aiming to flesh out that relationship for a potential second season which would make sense.

Now what was exactly the problem with the case of this week? Well for starters, one didn’t care that much about the victim or the villains. It was also hard to understand what motives the villains had throughout the episode. Speaking of villains, it was nice to see Reinhardt again who was last seen in the pilot. Maybe he will have some role in the remaining five episodes? That wouldn’t be such a bad idea and perhaps his appearance in this episode was a hint towards that.

What “You Are Here” also proves, like some previous episodes, is that Rudy is the best character aside from the two main characters. For some reason it seems to be an on-and-off thing for this show when it comes to fleshing out its supporting cast. One week they make Captain Maldonado intriguing, the next she only has a standard effect. But most of the time whenever Rudy is in a scene, they manage to keep the interest for that character consistent.

Even though this episode wasn’t as strong as some of the previous episodes, it’s still quite annoying that FOX is already putting the show on a three week break. What is up with these hiatuses these days? It’s understandable why they are gone next week because of Sleepy Hollow’s 2-hour season finale but what about January 27?

Who knows what the reason could be, but it would be nice to see these five remaining episodes without any breaks when the show returns. However, it’s nice to see that the ratings for this week’s episode was up as well and if the numbers continues to increase, season 2 will definitely happen. Another upside is when the show returns, it will be followed by The Following which will hopefully turn out to be a great line-up for FOX.