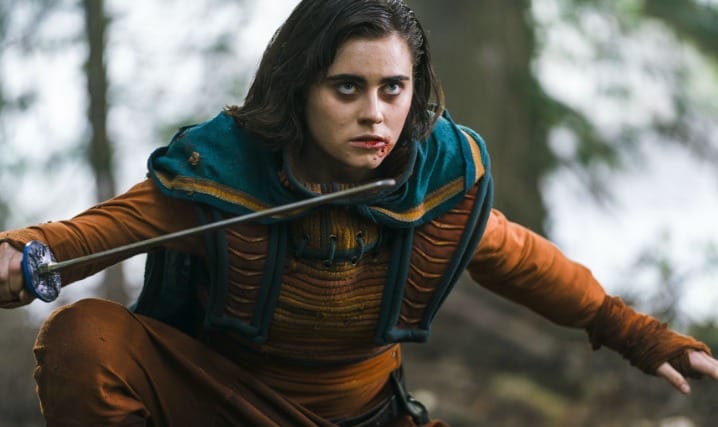 There are those actors that come into the business and just seem ready to take the world by the tail and do what they will and then there are those that come in and seem like all they really need is a good push or a good role to really break them into that next level. Ally Ioannides seems like that to be honest since she can play the roles she’s given with great skill and she has what feels like a hidden level of talent that’s just waiting beneath the surface to bust out and really show people what she’s capable. So far she’s been great in the roles she’s taken since she does show that she belongs there and is able to keep up with everyone and even surpass them a time or two. But despite what she’s done so far, which has been great, she seems to need that one final shifting of gears to really ramp her career into something great.

Ally has been in productions such as Annie and A Christmas Story on stage and has been deemed as more than capable at completing a role. For such projects as these that’s high praise since they don’t allow for a whole lot of mistakes.

9. She stars in Into the Badlands on AMC.

Tilda is a fiercely loyal woman with a great many doubts in this martial arts-driven series as she is uncertain of what a war between the clans is going to bring and whether or not her place in it is as secure as she thinks. She’s tough, but she’s also hesitant, and that’s never a good thing among killers.

Starting so young would seem to hinder a person’s growth at some point you would think but Ally has been doing just fine in her life it would seem and aside from that she’s not the oldest child to ever start in show business. Keep in mind that some kids start out before they can walk or talk.

Right now her career is on a high note since Into the Badlands is still considered a great show and something to watch in an attempt to see who’s really going to be the breakout star. If it’s her then it won’t be surprising, but if not then she still has a lot going for her.

There’s a lot of time left in her life to perfect her craft and to get something out of life in terms of living and experiencing the things she wants to. Some actors never seem to take time to really appreciate the fruits of their labors, but it’s important to remember that what you earn you can also enjoy.

5. She’s been in Parenthood.

This is a great show because while it’s not easy for everyone to relate to it’s still diverse enough that it can offer up a different perspective with each show if one really looks at what’s going on in the lives of the characters.

4. She’s guest-starred on a few shows.

Ally has managed to get around when it comes to showing up on other projects and this seems very important as the exposure one needs to really get popular can’t just be relied on with one or two shows. It’s necessary to show up here and there on occasion in order to really get one’s reputation up.

3. She and her fellow cast members had to attend a martial arts basic training camp.

In a seven-week course it’s easy to assume that they weren’t masters when they walked out, but they at least got the basics and were skilled enough to make the movements look precise and good enough to pass muster on the shows since Into the Badlands is filled with deadly warriors that know how to fight as a means of survival.

Ally has a few hobbies that keep her on the go and fairly active as she enjoys skiing and a few other things that enrich her life. Even with acting being what it is, one has to remember to get out and have fun now and then, otherwise it’s not really worth the effort if all you do is work.

It’s unknown if this is a hobby or some other aspiration that she has towards becoming a writer one day but the act of writing is not exactly the hard part, it’s having the desire and the skill that needs to come with it. While one is absolutely crucial the other comes with time and practice.

She seems like a very interesting person. It will be intriguing to see how far she goes with her career.