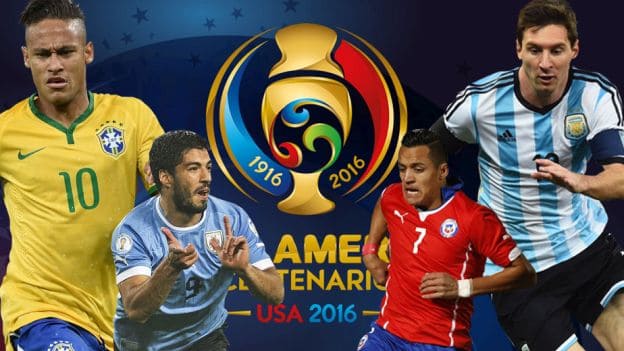 It’s been a great time for soccer fans. First we had a great Champions League Final, and now we have the 100th anniversary of Copa America, which is being referred to as Copa America Centenario, taking place over the next few weeks in the United States. It is one of the largest soccer tournaments the U.S. has ever hosted dating back to the 1990s. It comes at a great time as soccer has seen a pickup in viewers in the United States. As it has become easier to watch international matches and a dominant U.S. Women’s National Team making headlines, the U.S. fans have responded.

Copa America will not only be an ideal time for U.S.-based soccer fans to watch the U.S. Men’s National Team compete against top tier talent, but it will also be an opportunity to watch other incredibly talented countries face off. In the U.S. group alone, Costa Rica and Columbia are two strong teams who have been playing incredibly well in international play of late.

Copa America Centenario will be a can’t miss tournament, and luckily you don’t have to because you can watch without cable. We want to make sure no soccer fan misses the action during the tournament, and in that spirit we decided to take a look at some other matches in the past that were can’t miss action. Below are five of the most watched soccer games in U.S. history.

Over 15 million viewers in the United States tuned in for this match when the U.S. Men’s team attempted to advance to the quarterfinals of the World Cup in South Africa. The match followed a strong performance in group play that saw the USA winning its group for the first time in World Cup since 1930. Ultimately, the U.S. fell to Ghana 2-1 in the extra period after bouncing back from an early one goal deficit.

Four years later, the U.S. Men’s team made it back to the round of 16 and this time faced off against Belgium with almost 16.5 million viewers watching the match. For the first time in history, the U.S. had made two consecutive trips to the knockout stage of the World Cup. Unfortunately, the match ended in a nearly identical fashion to four years ago. The U.S. lost to Beligum 2-1 in extra time. They only lasted that long behind Tim Howard’s record-setting 15 saves during the match.

Over the last decade and a half the Women’s final match in the 1999 World Cup has been one of the most iconic events in all of U.S. soccer. The U.S. team was trying to be the first women’s team to win a world championship hosted on their own home soil and were facing an incredibly talented Chinese team that had beat them in the final match of the Algarve Cup earlier that year. Almost 18 million viewers were watching and rooting for the U.S. to pull through. The match finished at 0-0 and the U.S. Women’s team ultimately won on their final penalty kick off the foot of Brandi Chastain.

The match between the United States and Portugal took place in the group stage, but was an exciting opportunity for U.S. fans to watch their team face off against one of the best players in the world, Christiano Ronaldo. The match was not a letdown for fans looking for excitement either. The U.S. team took the Portuguese team to the wire and really walked away feeling like they let a victory slip away. In one of the last moments of the game in the 94th minute Portugal scored a goal tying the game at 2-2 ending the U.S. team’s hopes of victory.

The final match of the 2015 Women’s World Cup was watched by more than 25 million viewers, which easily makes it the most watched soccer match a U.S. team has played in. Since their victory in 1999 the U.S. Women’s team won two consecutive Bronze medals and then a Silver medal in 2011 at the World Cup. They were seeking a return to the top in 2015 and made it to the finals with the only thing resembling a blemish on their record being a 0-0 draw against Sweden in the group stage.

The team made headlines throughout due to some heroic play from some of its top players and this did not stop in the final match. The U.S. took a 4-0 lead in the first 20 minutes on Carli Lloyd’s dominant play and even with this lead viewership actually rose and peaked above 30 million in the second half. The game finished at a score of 5-2 and the U.S. team were named the winners of the 2015 World Cup for the first time since 1999.