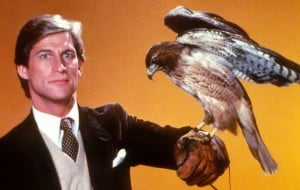 Great television shows tend to crawl up into our subconscious and bury themselves there, forever etched into our memories. But sometimes, there are shows SO BAD, your brain tries to erase them from your mind without you ever even being aware you watched them. I decided it would be funny to mention some of those shows and have a quick laugh about just how absurd they are. Note, if me bringing any of these shows up summons post traumatic stress disorder in you, please accept my genuine apology now. But I hope enough time has passed with most of these that you can laugh at just how utterly moronic they are.

Yes, this was a TV show about a guy who could turn himself into any animal he wanted to in any given situation. It may sound awesome, but this was 1983, so it oozed with way more cheese then cool. Still, though, could have been a cool concept in the right hands. AND IF IT WERE ANIMATED.

A cop show from the 90’s that was also a musical. And no, we are not talking a musical that used famous songs, like TV shows like Glee do now. No, we are talking about songs that were about what was going on in any given episode. So yes, there were songs about drunk driving and silly stuff like that. The thing is, it was a drama. They were trying to be serious. HAHAHAHAAHA, so bad it was almost good, and has a cult following now.

Trying to cash in on the adult cartoon TV like The Simpsons, Capitol Critters was an animated prime time show about talking animals who were politicians and…oh, come on. I can’t even continue with this one. But yes, this existed. For about two weeks.

My Mother, The Car

This is a REAL TV show from 1965 about a guy whose overprotective Mom passes away and her ghost possesses his car. Really, the name of the show is the premise AND the only running joke. This is awful on many, many profound levels.

Remember when Geico thought the cave men from their commercials were so funny that they could carry their own TV show in 2007? And remember when it ended up being exactly as awful as it sounds, and it only lasted less than a season? Well now you do, even if you brain tried to forget.

See, TV is actually in pretty good space right now if you look at it comparatively to what they used to force feed us. Also safe to say it is only a matter of time before we hear about a Manimal reboot on the SyFy channel.