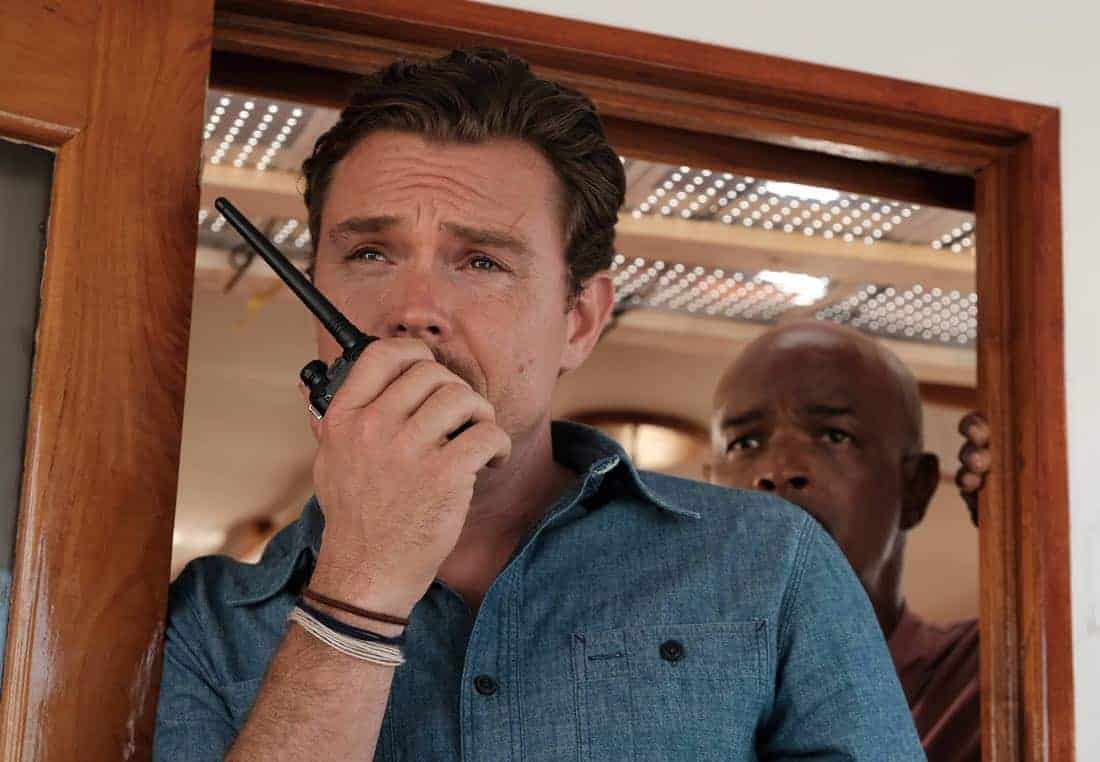 On this Week’s Episode of Lethal Weapon Riggs and Murtaugh investigate the death of a plastic surgeon. The Deputy Chief comes to investigate the entire division. RJ prepares to leave for College and Riggs reconnects with Agent Palmer.

The episode opens with a drug-fueled party at the house of a plastic surgeon named Dr. Harris, who is then found dead in his hot tub. Meanwhile, at the Murtaugh house, Roger helps RJ pack for college and while helping him move boxes he injures his back.

The next day Riggs meets with doctor Cahill who is surprised to see him so early in the morning. Dr. Cahill quickly realizes that Riggs is interested in dating again. He tells her that he found the card of Agent Karen Palmer (Played by Hilarie Burton) but he doesn’t know what he would say to her. He asks Dr. Cahill if he is being too normal and she says she doesn’t think so.

When Murtaugh arrives at the crime scene Scorsese says that it looks like a heart attack but Riggs who was surprisingly first on the scene says that it was actually murder and that they need to call the DEA. When he sees that Murtaugh’s back is hurt he cracks it for him.

Back at the station, Captain Avery tells Riggs and Murtaugh that the LAPD is sending over the Deputy Chief Gina Santos (played by Michelle Hurd) to evaluate their entire division. When she arrives Murtaugh becomes flustered because years ago when they worked together on a stakeout Murtaugh got vibes that she was hitting on him and when he went to turn the radio up she touched his finger and did not move her hand away.

Bailey comes to tell Riggs and Murtaugh that doctor Harris was murdered with an injection of potassium chloride. Riggs and Murtaugh go to pay his business partner a visit at his clinic but not before Bailey gives them their new body cameras that the Deputy Chief wants them to wear.

While talking to doctor Harris’s  business partner, he tells Murtaugh that he should come in and get treatment for his back. Riggs notices two guys who look suspicious, so Riggs and Murtaugh decide to follow them which leads to a chase across the clinic grounds and Riggs body camera being broken.

After getting back to the station Murtaugh shows Chief Deputy Santos the footage from his body camera. She says that she thought Riggs was the challenge but it’s actually Murtaugh. When Riggs brings up the Idea of bringing in the DEA she agrees with him. So Riggs goes to see Detective Palmer, who is not all that excited to see him. She tells him that she has been taken off Cartel Duty and is exiled because she gave him the file on Tito Flores.

He tells her that he needs the DEA’s help and shows her the video from his body camera. But when he tells her about the steroids she gets upset that he brought her a case about steroids and says she is not the FDA, so he gets up and leaves then she notices someone in the video.

Back at the Murtaugh house, RJ tries to convince Roger to let him live at home while he goes to school but Trish says no. At the station, Captain Avery is surprised to see Riggs still working. When Riggs figures out that the guys they were chasing were a part of the Russian Mob he goes to talk to doctor Weller at the clinic again and Captain Avery goes with him.

Murtaugh is at the clinic and hides when he hears Riggs and Captain Avery coming. When they find Dr. Weller dead Riggs chases after Sergei Kryev who ends up being stopped by agent Palmer and she arrests him. Murtaugh shows up and when Riggs asks him what he is doing there he avoids the question by pointing out that Agent Palmer took their suspect.

When they get back to the station Deputy Chief Santos is upset because they lost a suspect and they’re not following police procedure. Riggs tells her that they didn’t actually lose him and that he is being interrogated by the DEA.

Agent Palmer and Riggs try to get information out of each other to help solve the case (This is a really funny scene) Agent Palmer lets it slip that Sergei Kryev is working for Russian mobster Christian Orloff who is in town because he is looking for a patient. With that information Riggs, Murtaugh and Captain Avery go to see Bailey.

who comes up with the name Sara Burns, Riggs and Murtaugh go to the pharmacy where her pain medicine is being filled but the pharmacist will not give them any information. While there they run into agent Palmer who is trying to get the same information they are.

While Riggs and Agent Palmer are talking, Murtaugh goes to get something for his back pain and he runs into Sara who he saw earlier in the episode. When they take Sara back to the Station she tells them how she had no Idea she was working for Christian Orloff and that when she did find out and tried to quit he said he would kill her.

When Riggs sees how aggressive agent Palmer is being with Sara he realizes that she is not upset with Sara at all but upset with him for messing up her career. Sara interrupts them and ends up telling them she is the one who killed Doctor Harris. Murtaugh goes to see Deputy Chief Santos and tells her why Sara killed Doctor Harris and that they solved the murder case.

While speaking with her Murtaugh brings up the up the fact that he thinks she flirted with him years ago on a stakeout. She says she is going to give him some professional advice, to stop talking two minutes before he thinks he should stop talking.

Next, Trish shows RJ a picture of herself her senior year of High School and tells him the story of how she didn’t want to leave for college either, but after getting there she loved it.

Meanwhile, Agent Palmer comes up with a plan to catch Christian Orloff since he doesn’t know what Sara looks like after having plastic surgery. She will pretend to be Sara and get him to admit to drug trafficking on a wire. However, things don’t go exactly as planned.

Then Doctor Cahill comes to see Riggs and asks him if he knows what he is avoiding at home? He says it’s too quiet at home and it’s harder to fake normal there and she tells him he’s not fooling anyone at work earthier. While talking to doctor Cahill an armed robbery in West L.A. comes in and Riggs decides to take it.

Next Trish and Roger drop RJ off at college. Trish has second thoughts about RJ staying a dorm when she realizes it’s co-ed and she doesn’t want to let him go. When it’s finally time to say goodbye Roger tells her not to look back when they leave.

At the very end of the episode, Riggs goes to the location of the armed robbery and finds out there is no armed robbery and Palmer is waiting for him. She takes two beers from the store and they kiss by the dumpsters

Overall, I think this was a really good Episode and I can’t wait to see where the storylines of Chief Deputy Santos and Palmer and Riggs go throughout the rest of the season.

On this Week’s action-packed Episode of Lethal Weapon Riggs and Murtaugh investigate the death of a plastic surgeon. The Deputy Chief comes to investigate the entire division. RJ prepares to leave for College and Riggs reconnects with Agent Palmer.