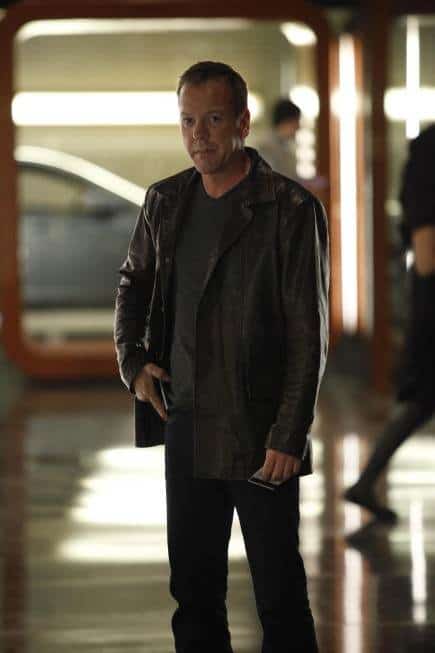 Tonight on ’24’: Jack Bauer was dragged back into the national security fray when an old contact showed up on his New York doorstep with a bullet wound and information regarding an imminent attack on President Hassan, who was in New York to meet with Madam President to discuss a peace treaty that would limit his country’s nuclear proliferation. (Phew.) Jack tried to get his contact to the new and improved CTU, but the terror cell attacked his helicopter with an RPG, blowing it up and his source along with it. CTU thought Meredith Reed, a reporter, was the link to the terrorist group, but she was actually just screwing Hassan (literally). Chloe convinced a stubborn Jack to help her pursue a theory that Reed was a red herring. Torn between his desire to be a grandfather by returning to LA with Spawn and his duty to protect his country, Jack eventually went with the latter (duh). He got the reluctant approval of Brian Hastings, the Bill Buchanan replacement at CTU, to help Chloe track down her lead. In the final minutes of the two hour premiere, we found out that one of the main actors in the terror cell is actually a cop and he’s going to use his bad to accomplish something nefarious. But we’ll have to wait until tomorrow night to figure out exactly what that is.

Maybe I got a little spoiled during last season’s premiere — after all, between ‘Redemption,’ Tony’s return, and the CIP device, there was lots of goodness to go around. Perhaps that’s why I was underwhelmed by tonight’s proceedings. It’s not to say that there weren’t some fantastic moments. Jack taking out not one, but TWO guys with a fire axe has got to rank among his Top Ten Most Badass Moments. And Granddaddy!Jack playing with Wee Spawn and talking about bears was all kinds of adorable. (On a side note, I think someone needs to tell Spawn that her husband is a vampire. Y’know, before he gets all dark and brooding on her.) Oh! And helicopter went boom when the RPG hit and the fireball was pretttttty. All of my baser ’24’ desires were satisfied. Spawn seems to have grown up significantly, though I feel like my loathing of her is so completely instinctual at this point that it borders on the irrational. But I just can’t get past it! Jack broke into CTU’s puny armory (although he’s gotten by with nothing more than a cell phone and his fists before — the WORLD is Jack Bauer’s armory, damn it!) and the Man Bag made a triumphant return.

That being said, the Katee Sackoff character, Dana, was advertised as a techie with a dark past, but her past isn’t seeming so dark right now. Other than a “redneck” upbringing and some possible sexual indiscretions, and an OMG SECRET IDENTITY, I’m not really seeing the big deal. But I was admittedly distracted by Katee Sackoff’s arms, so I may have missed something. Daaaaaymn. I enjoyed Dana’s interactions with Chloe at the beginning, but as we progressed, they became increasingly stiff. I couldn’t help but wonder why exactly Chole, she of the Genius Computer Wizzery, was having such serious problems with the system to the point where she would be in danger of losing her job. Is it just to make Dana look more efficient/impressive, or what? Either way, I was much relieved when Chloe manned (or womaned, if you’d prefer) up and called Jack out on shirking his ethical responsibilities. I didn’t see enough of Freddie Prinz Jr. to really make a judgement, but I think there’s potential there. He’s got a quiet strength to him that I like.

I was also disappointed by the criminal syndicate as presented in these first two episodes. Again, perhaps I was spoiled by last season and the wonderful Jon Voight, but I’d love some sort of charismatic evil mastermind to organize the chaos. I might be calling it too early, as Hassan’s wife seems to have something fishy going on, and Bauer will certainly work his way up the syndicate’s chain of command.

And where’s Agent Renee Walker, damn it?! The commercials advertised Red, and I expected Red! Judging by the preview, she’ll probably make a showing tomorrow night. Make sure to tune in at 8pm!

So what’s the consensus, ’24’ fans? Did the premiere reek a bit too much of Day 3 for you? Or are you excited to see where the season goes?