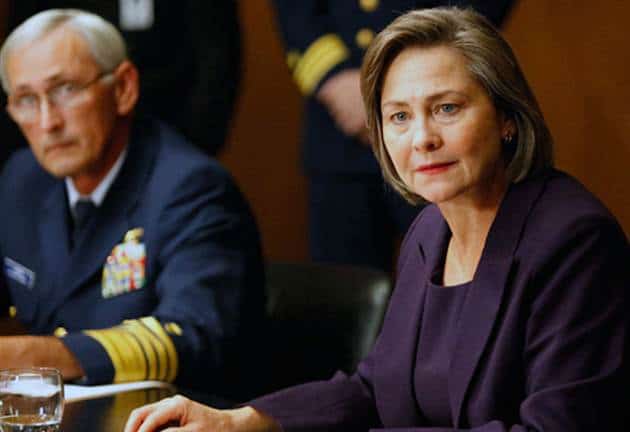 Tonight on the two-hour ’24’ extravaboganza — a twist! Oh, good lord, a twist to rival all twists. I totally didn’t think they’d go there, but the writers did and Hassan is dead at the hands of Samir and his good friend the Columbian Necktie. Peace out, Hassan. You and your incredible hair will be missed.

Let us begin at… well, the beginning. Hassan decided to give himself up to General Rucker’s forces and, unfortunately, this plan involved whacking Jack over the back of the head with a pistol and stuffing him in a room with Hassan’s family and Renee before the dude who took the bullet in the leg continued the process of turning him over to Samir and the IRK. So Samir called Tarin at the last possible moment and told him to stop the bomb. Tamir was very thankful for this development and swapped the bomb for Hassan. The two started driving to Samir with the aid of Mole!Dana and her incredibly obvious subversive techniques. Once Jack was able to bust his way out of the room, he called Madame President and alerted her to Rucker’s betrayal. Then he stole a HYUNDAI OMG (I know they’re an advertiser, but the product placement was all kinds of hilarious for some reason) and took off after Tarin and Hassan. Dana let Tarin know about CTU roadblocks and he took a detour into a parking garage with Jack hot on his ass, dropped Hassan with another relay group and promptly drove off the third story of the parking garage in front of Jack’s own eyes. Bye, Tarin!

Meanwhile, Madame President was having administrative issues. Again. Some more. After Jack alerted her to the conspiracy in her administration, she marched her ass down to Ethan’s office and barged in to find Ethan on the couch (not dead, thank god) and Weiss and Rucker with guilty looks plastered on their faces. When she asked for Hassan’s location, Weiss was unwilling to spill (by that time it was too late – Hassan had already been traded for the bomb) and seemed somewhat unnerved by Madame President’s insistence that she would take great glee in his treason prosecution. I say she just make Bauer the Chief of Staff and be done with it, but the people on the other side of the TV never listen to me when I offer them advice. Pity. Thankfully, Ethan recovered (sorta) later in the episode to emphasize to Madame President that this Middle East peace treaty is dead without Hassan. His words were emphasized by a visit with the Russian Prime Minister, who made it clear that he’d be pulling out of the peace talks if Hassan wasn’t there. Madame President exchanged some fightin’ words with him before backing off, realizing she’d come off too strong. Based on the last couple episodes, I think Cherry Jones is gunning for another Emmy because she’s laying it on pretty thick. I’m sure that’s on purpose, but it’s coming off as trying a leettle too hard for my taste.

Onto Dana, who’s become MUCH less annoying since her mole status was revealed. For whatever reason, dumb bad guys are a bit more bearable for me than dumb good guys. So Dana kept trying to leave the CTU bullpen to tell Tarin about the roadblocks (clearly she’s never heard of text messaging), but Chloe kept stopping her and when she seemed to FINALLY make it to a safe place, Cole intercepted her and she had to make up a bull excuse about fixing the servers. Dana thought she was home free in the server room, but Arlo the Serial Sexual Harasser followed her there and started asking suspicious questions. Dana got him to sit down at the computer chair and was about to garrote him from behind before he got a phone call and had to leave. I wouldn’t have shed tears. Dana AT LAST contacted Tarin and then decided to get her pretty little ass out of CTU, but due to security protocols, wasn’t allowed to leave the building until Hastings changed her status in the system. So she went up to Hastings’ office and made up a bull excuse about needing to fix his computer. Hastings was conveniently called downstairs by Chloe, who, with the aid of Renee and Tarin’s cell phone, was able to figure out that there was a CTU mole undermining their every move. These people are genius — just genius! Right when Chloe and Hastings found out that the mole was, in fact, Dana, Ms. Walsh skedaddled out the door. Except Hastings put an emergency hold on her clearance and she was forced to shoot her way out the front door. Pretty good shootin’ for a desk jockey. The firefight continued in the parking garage until Cole shot out her tires, causing her to crash. He yanked her out of the crunched car and pointed a gun at her head while he called her a liar. It was Freddie Prinz at his best. Hee. Dana, however, refused to divulge where Hassan was and insisted she talk to Jack. Because apparently even the bad guys have figured out that Jack Bauer is the only one around there that can get stuff done correctly.

Jack and Dana faced off in the interrogation room and I was really praying he’d snap her neck. But I like Katee Sackoff too much and would prefer she’d stick around a few more episodes now that the character’s become, well, useful. Or moreso, at least. And seems to have a funny chemistry with Kiefer Sutherland that both amuses and confuses me. In an icky, yet awesome sort of way. Yes, I’m conflicted. But I can’t help notice it — it’s almost Nina-esque. Anyway, Dana wanted full immunity, a clean record and money. Lots of IRK money. In exchange, she’d tell CTU where Hassan was. Jack, though still suspicious, called the President because Dana claimed that Samir was going to have Hassan read a statement over a live internet feed and then execute him right then and there. Madame President thought it was enough to warrant a conditional immunity agreement and Dana cooperated by giving the location of the building, but not the particular room Hassan was in. Where’s all this useful thermal imaging that we’ve had in past seasons? Cole, meanwhile, gave Hastings most of the story about he and Dana and though Hastings was pissed, he allowed Cole to continue to serve with Jack on the Hassan recovery mission. And he shot the blackest of looks at Dana when the two passed by the interrogation room. Five dollars says it’s Cole who ends her.

[And the creepiest line of the night goes, of course, to Arlo, who ponded that if only he’d been looking at Dana’s face, he might’ve known she was the mole. Chloe told him to get over it. Hear, hear. And Chloe needs to get her ass over to the EEOC before Arlo turns his affections her way.]

So back to Hassan and Samir. Samir revealed that he’d served in the IRK army under Hassan (when he was a general) and they’d met at a briefing and Samir thought he was a wonderful man then, but now? Not so much. Then he spattered on about the betrayal business and Hassan pulled the “You trusted me then — trust me now” card, but Samir didn’t buy it and decided to resort to torture and drugs to get Hassan to read the statement of his crimes in front of the camera. When Hassan didn’t agree, Samir decided to just read the damn thing himself. He’s pretty smart for a terrorist mastermind.

The internet feed went up and Madame President got news of it right away. She told Mrs. Hassan and Kayla, who were hanging out with the rest of the cabinet. They were distraught, but Madame President returned to the briefing room to watch the video without them. Good call. Back at CTU, Chloe was able to figure out what general area Hassan was being held in due to lighting and perspective crap while Jack set up the troops, including Cole and Renee. He had Cole’s men take out a couple of lookouts Samir had posted and then quietly worked his way into the building. One of the CTU guys used a sound wave analyzer (which would be funny if I was 90% sure that such a thing exists) and identified the room he thought Hassan was in. Renee and Jack broke in and found a normal apartment unit, a little kid on a couch, and her mommy. The little kid started screaming and Jack shoved her into the hallway with the CTU agents. While Jack was exploring the room, the mom reached for a gun and Renee deep-sixed her. Just as it seemed the video was about to climax, Jack found the room where the broadcast was taking place and took out like four IRK guys on his own. But the shooting doesn’t show up on the video because it was being taped from a pre-recorded file on a laptop. Guess what that meant? Yep. Hassan’s bloody, dead corpse was in the corner. Too late. Jack mournfully closed his buddy’s eyes and told Madame President what happened and I had to reach for the goddamn Kleenexes because I’m not supposed to get choked up by this stupid show! Madame President got about as unnerved as I’ve seen her, but pulled herself together to tell Hassan’s family what happened as the clock went silent.

Phew! I think that’s most of it. Talk about an epic two hours. Just when I was thinking to myself, “Well, if they save Hassan, what will they do for the next seven hours?” then — BAM. Wrecked me. That plotline was firing on all fronts, the Dana plotline isn’t stupid anymore (I may be enjoying it a little bit, but mostly for the tension between she and Cole and she and Jack) and Ethan isn’t dead! Horray! Next week looks good, but I don’t know how much longer I can deal with Former President Logan being dangled in front of me in the previews. He’d better actually be in the episode next week or there’s gonna be hell to pay.