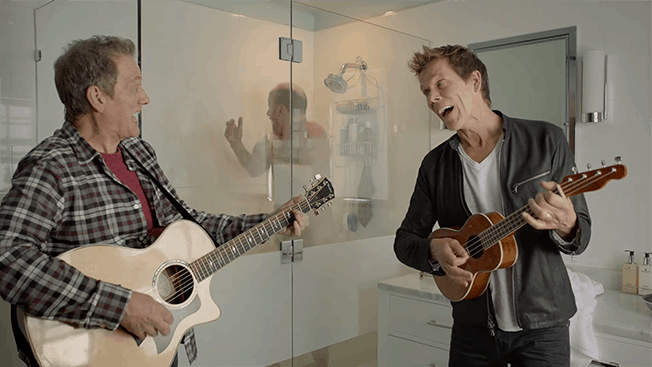 They say the grass is always greener on the other side. I don’t know who “they” are, but they seem to be right: athletes want to be actors, musicians want to be athletes, and quite often, actors want to be musicians. Sometimes an actor or actress has an innate talent and can make the transition into music smoothly, but other times it’s an embarrassment for just about everyone involved. In any event, I think it’s a trend that isn’t going to vanish anytime soon, so the best we can do is hope for good music and simply have a good laugh when the music stinks.

The latter scenario seems to be more common, which isn’t necessarily a bad thing. Check out 18 actors and actresses who ditched the big screen or television – at least for a little bit – to make some music, along with a level of embarrassment rating (1-10) for the transition.

Known for: Saturday Night Live, some of the best stand up comedy ever, and horrible, unfunny family movies.

Level of embarrassment: 9. This is absolutely terrible. The only reason Eddie didn’t score a 10 is because Norbit and the rest of the movies he’s starred in the past decade are more embarrassing. Cringe-worthy, if you will.

Known for: Party of Five, The Ghost Whisperer.

Level of embarrassment: 7. Her music is generic, safe, and not particularly interesting, but then again, the same can be said about her career. Pose in Playboy already!

Level of embarrassment: 7. The music is pretty awful, but Crowe could have scored a 5 if he didn’t take himself so seriously.

Level of embarrassment: 5. It isn’t good, but it’s not that horrible, either. I don’t think many people take Keanu seriously in the first place.

Known for: Being a Fly Girl on In Living Color, Anaconda, Bennifer.

Level of embarrassment: 0. She’s one of the biggest pop stars on the planet.

Level of embarrassment: 6. Her “music” is atrocious, but as far as things to be embarrassed about, it’s probably not very high on her list.

Level of embarrassment: 8. Can we all just agree that she isn’t very talented and is simply some of the best eye candy of our generation? We can? Good.

Level of embarrassment: It depends. If he’s serious about this, then a 10. If he’s joking, a 9. Nobody thinks it’s funny.

Known for: Knight Rider, Baywatch, being “The Hoff.”

Level of embarrassment: 1. Laugh all you want, but The Hoff is a god in Europe.

Known for: Lizzie McGuire, A Cinderella Story, now on Younger.

Level of embarrassment: 3. Hilary can actually sing, and she looks pretty good doing it. Millions of pre-teen girls worship her, so she must be doing something right.

Known for: In Living Color, Any Given Sunday, Ray.

Level of embarrassment: 2. I don’t think he’ll ever be a hugely successful recording artist, but Foxx’s collaboration with Kanye “Fish Sticks” West was one of the biggest hits of the late 2000s.

Level of embarrassment: 8. Bill Simmons once wrote something along the lines of, “Does Brian Austin Green ever look at Justin Timberlake and ask himself, ‘What the hell did I do wrong?'” I’d be harder on him, but he’s awesome as Derek Reese in Chronicles, and any man who has known Megan Fox in the biblical sense is to be admired.

Known for: My So Called Life, getting beat up in Fight Club, Dallas Buyers Club, The Joker.

Level of embarrassment: 2. His band, 30 Seconds to Mars, is pretty successful and has a decent following.

Known for: Tenacious D, School of Rock, being polarizing.

Level of embarrassment: 1. Jack Black – love him or hate him – can play a mean guitar and has some good pipes, too. The fact that everyone knows about Tenacious D should tell you all you need to know about his musical prowess. When you’re chilling with musical geniuses like Dave Grohl, you’re doing something right.

Level of embarrassment: 6. Nobody heard of the Boxmasters until Thornton’s little tantrum during a QTV interview. Relax, dude.

Known for: Being six degrees away from anyone who’s ever been in a movie.

Level of embarrassment: 3. The Bacon Brothers are respectable at worst.

Level of embarrassment: 5. Bruce has been known to perform at The House of Blues and has been with his band The Accelerators pretty often. They’re not very good, but do you think Bruce Willis gives a crap about what we think? He’s cooler than just about everyone.

Level of embarrassment: 10. Just watch the video.Â  His voice is actually decent.