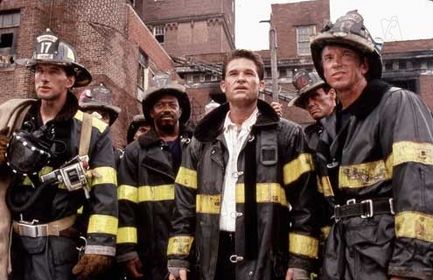 Thankfully, firefighters have for the most part been given their due as heroes, and society has recognized the dangers associated with the job. So, when a firefighter is portrayed as brave or heroic in a movie, it’s not really much of a stretch. I’ve always admired firefighters – I’d be wetting my pants if I had to rush into a blazing building – and I’ve always considered them morally superior to cops. I’m not saying there aren’t good cops, but you almost never hear of corrupt firefighters. There have been many films throughout the years featuring firefighters, and many of those firefighters have left an impression on us as viewers. Here’s my quasi-tribute to the men and women that put their lives at risk for our safety. After the jump, take a look at 11 memorable firefighters in movies.

Charles Levine – I Now Pronounce You Chuck and Larry 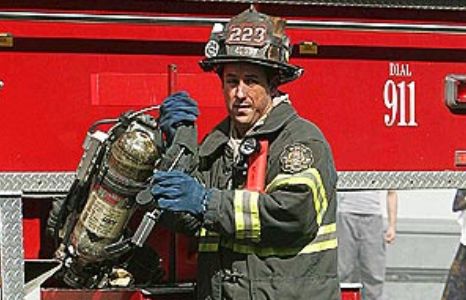 I thought that I Now Pronounce You Chuck and Larry would be stupid and unfunny, so I never got around to seeing it in the theaters. When it came on cable, though, I gave it a shot and was pleasantly surprised. It’s not a classic or hysterical by any stretch, but it definitely does have its moments. And Adam Sandler – who plays firefighter Charles Levine – is very funny in it. I don’t think funny people like Sandler just stop being funny; they simply choose to appear in more family-friendly, silly movies. Sandler’s macho, womanizing Levine is about as hetero as you can get, so when he pretends to be gay, the results are somewhat predictable but funny nonetheless. 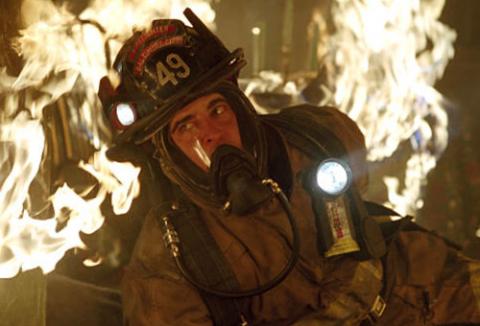 In Ladder 49, Jack Morrison endures every firefighter’s worst nightmare – being trapped in a burning building. Unable to escape because of the blaze and a broken leg, Morrison has no choice but to wait for his fellow firefighters to come and save him. While he waits, Morrison reminisces about his life and the relationships he’s built with his peers and family. I won’t spoil the movie and tell you whether or not Morrison makes it out, but his heroism and willingness to put his life on the line for others are undeniable. 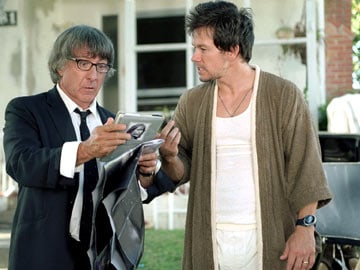 Mark Wahlberg seems like he was born to play blue-collar workers, doesn’t he? I Heart Huckabees is anything but a “firefighter movie” – it’s laced with existential and nihilistic themes throughout – but Wahlberg’s portrayal of firefighter Tommy Corn is memorable anyway. I mean, how many firefighters do you know that are into nihilism and absurdism? Fortunately, Tommy manages to stop reading Camus long enough to put out a blaze. 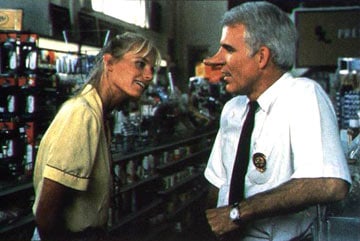 Bales is a fire chief in the movie Roxanne and would be memorable even if he was normal-looking. But he’s not – Bales sports a gigantic schnoz that he is unable to get “fixed” and obviously hurts his chances with the ladies. Still, he’s very talented, and the scene in the bar where Bales insults himself as a sort of preemptive strike against his would-be taunter is classic. 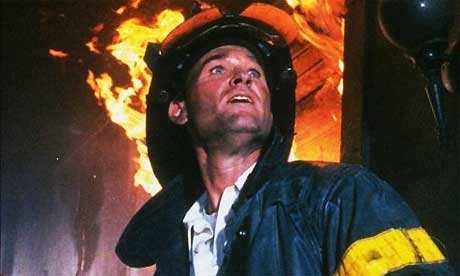 I don’t know about you, but when I think of “firefighter movies,” I immediately think of Backdraft – an intense movie with a great cast and a great director (is Ron Howard really that great? Eh, I suppose it’s a discussion for another time). Anyway, Kurt Russell plays McCaffrey, an aggressive firefighter who has no problem entering a building engulfed by flames, often in a pretty reckless manner. He leaves a lasting impression on his brother, Brian, who continues to fight fires after Stephen is no longer, uh, active. 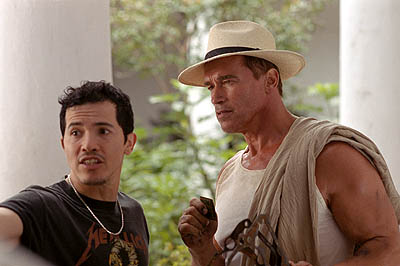 Traveling to Colombia to exact revenge on the man who killed his wife and son – the Wolf – Gordy Brewer is without a doubt the toughest fireman who ever lived. We see Gordy doing his job at the very beginning of the movie, but his firefighting skills take a long hiatus until the movie’s end…when Gordy uses his fireman’s axe on the Wolf’s chest. Nice. 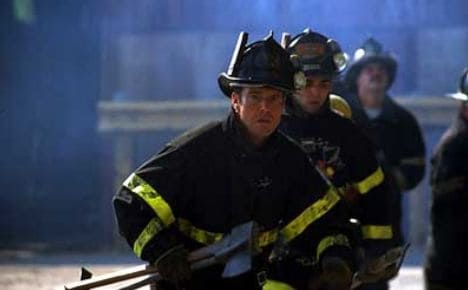 Dennis Quaid plays Frank Sullivan, a firefighter who died years before the movie begins. With the help of his son and a ham radio that can transmit information across time, he is able to cheat death and change history, including stopping a murderer. Unfortunately, we don’t really get to see Frank weilding a fireman’s axe or a hose, but we are treated to his skills with a shotgun. If Mark Wahlberg was born to play blue-collar workers, Dennis Quaid was born to play awesome dads. 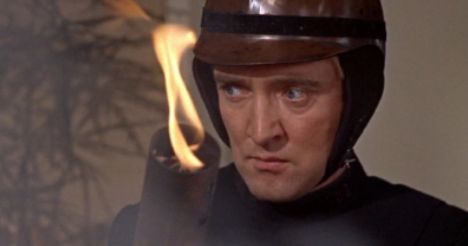 Based on the classic novel by Ray Bradbury that everyone read in high school, Farenheit 451 tells the story of a future where reading that leads to thought is a crime. Hence, books are burned. Guy Montag is a “fireman,” but not the type of fireman that we’ve accustomed to seeing. Rather, Guy’s job entails burning books “for the good of humanity.” Perhaps more effectively than any other genre, science fiction tackles social and political issues, and this film is no exception. Guy – as the protagonist, naturally – abandons his duties and begins reading books, fighting the good fight and doing his best to avoid being captured. 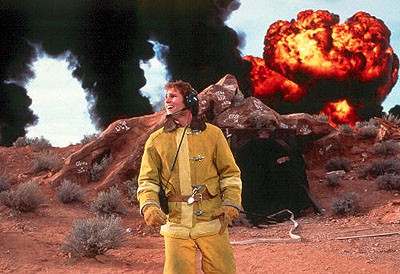 Wayne Grey – like a lot of characters placed by Seann William Scott – is essentially Stifler as a fireman. Is that memorable? Works for me. 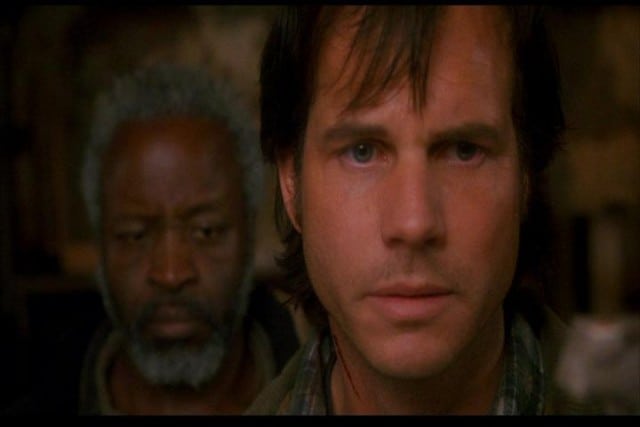 In Trespass, Vince (played by Bill Paxton) and his firefighter buddy Don receive a map from a lunatic who is soon swallowed by flames. Map in hand, the two firefighters realize that they may be able to find some treasure, specifically gold. After being confronted and hunted by some vicious gang members, Vince manages to escape from the building that housed the gold with his life, but not the treasure which he sought. That went to a homeless guy, who will no doubt spend it on booze and crack. 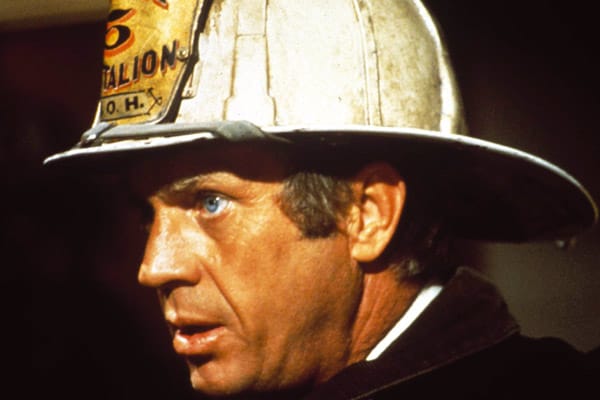 Gordy Brewer may be the toughest firefighter ever, but O’Hallorhan – played by the legendary Steve McQueen – has got to be the most manly. Confronted with a blaze that cannot be extinguished by conventional methods and that will without a doubt result in many casualties, O’Hallorhan uses explosives to blow up giant water tanks and flood the fire. Best of all, we all learn a valuable lesson about fire safety at the end of the movie: panic like crazy, and if someone’s in your way, push them down. Also, always try the elevators before the stairs.

Any firefighters in movies that I overlooked? Let me know in the comments section! 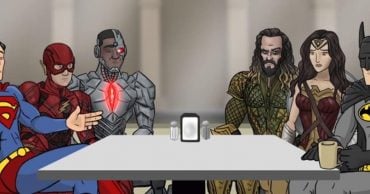 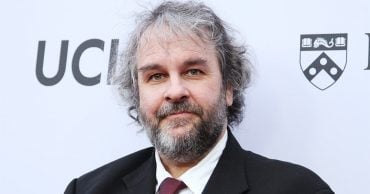 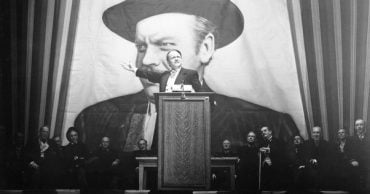 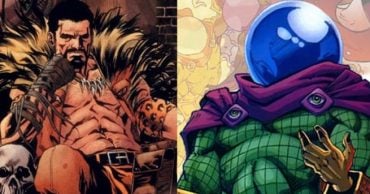 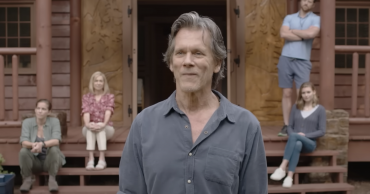 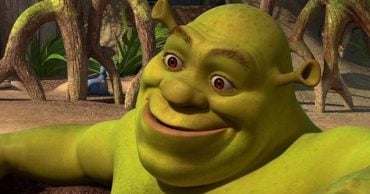