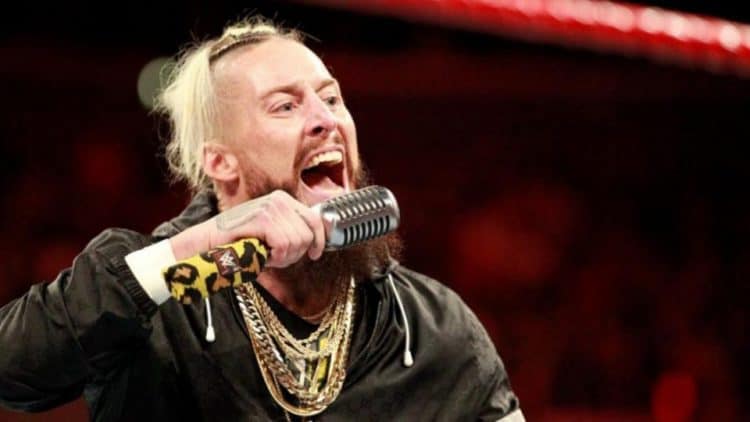 Eric Arndt, better known by his in-ring name, Enzo Amore, was one of the loudest talkers in the WWE not too long ago, but he was also one of the least-skilled wrestlers on the roster. Seriously, this guy could have been best by Gilberg when he was still in action he was that horrible. But his mic skills more than made up for his lack of skill, and the fact that he rolled with his partner Big Cass was another reason why people didn’t mess with him in the ring that often, apart from the fact that it just wasn’t in the script. But it might be important for some people to know that while a lot of this act was written out ahead of time, a lot of people in the locker room still didn’t care much for Enzo as his off screen persona wasn’t always appreciated. In fact it’s been stated that Roman Reigns even kicked him off the bus at one point for running his mouth too much. For all his skill at talking in the ring it’s never been seen that he can do much more than take a beating thanks to the script, and possibly to his unfortunate lack of natural talent.

This is just for fun:

10. He’s held down a few jobs throughout his life such as working at Hooters and for the New York Jets.

You can’t ever call Enzo a lazy bum since he’s been working diligently throughout his life at one establishment or another in an effort to better his life. But one has to wonder if the persona he brings to the ring is the same one he shows to the world in general, or if it’s toned down from time to time.

9. Enzo has a degree in journalism.

Obviously he’s not the fool that he pretends to be on screen and most of the wrestlers aren’t since they’ve gone to college and in some cases have been working on the circuit while pursuing other interests for years. They’re not dummies, they just act like it sometimes on TV.

8. He had no prior wrestling experience when WWE hired him.

This is what really seems to hamper him more than anything since his mic skills are top notch and his attitude has been what the WWE needs and looks for. But the inability to hang in the ring with actual wrestlers that have been doing this for years is a serious liability.

If you ask Simon Gotch from the former tag team, the Vaudevillains, Enzo supposedly broke his leg on purpose, but considering how much risk each wrestler takes on a regular basis when performing certain stunts there’s always a chance that Enzo didn’t see this coming. Of course he was trying to get out of a wristlock when he injured himself, so it’s hard to see how you break your leg doing such a thing.

6. He and Big Cass debuted on RAW against The Dudley Boyz.

The Dudley’s were one of the last tag teams that anyone wanted to face at one time, even past their prime. Even a big guy like Cass had his hands full with the Dudley’s since they weren’t known for being too forgiving to newbies.

5. Amore has always been strong on the mic, which was saved his job a lot of times.

This is where his real strength is since he can smack-talk with the best. To think of a dream match between him and The Rock when it just came to insults would have been something to see.

4. He was released from WWE following allegations of sexual misconduct.

Despite the lack of evidence the WWE has a zero tolerance policy when it comes to sexual misconduct and there wasn’t much of a chance that he’d be seeing the inside of a ring after this came out. The business doesn’t allow this kind of thing to go unanswered.

3. After his release he went on to try his hand at being a rapper.

It’s hard to say if he’s really finding any success at this so far but right now it would be safe to say that if he has then it’s not something that the mainstream has caught onto just yet since his name is still more infamous in the WWE than anywhere else.

2. Enzo was openly critical of his partner, Big Cass, after the bigger man couldn’t continue a match due to a legitimate knee injury.

This could be part of why he wasn’t all that respected in the locker room. Legitimate injuries do happen, and while some wrestlers try to power through them a wounded knee is a very difficult injury to work with.

1. He was banned from the Staples Center after causing a disruption during the Survivor Series event in 2018.

This kind of thing tends to happen in story lines from time to time, but it would seem that since Enzo isn’t part of the WWE any longer that this unscripted bit of business wasn’t really appreciated.

He’s great when he gets to open his mouth, but apart from that Enzo didn’t have much of a future in the WWE without improving his wrestling skills.