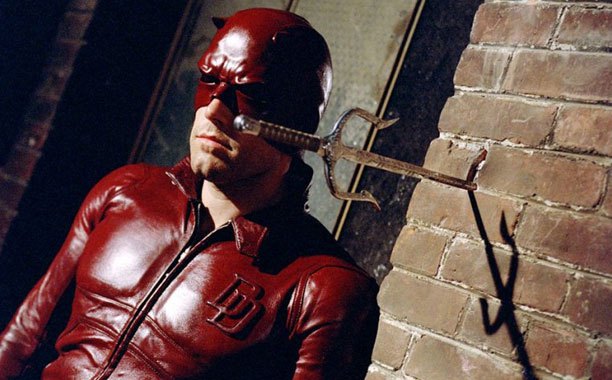 The Daredevil movie was quite honestly a flop. It had only few really redeemable qualities aside from the fact that it had Jennifer Garner and a completely insane Bullseye. Aside from that the film was a cinematic dud in every sense of the word. When the history books are opened after a while and this film is found it will no doubt read as one of Affleck’s biggest failures, and considering how bad he got roasted for Gigli that’s not exactly comforting. There are a few things that even the diehards had trouble pointing at though throughout this movie. Maybe they were trying to cover their eyes at the wrong moment.

10. The costume was really uncomfortable.

It’s very difficult to get a superhero costume to be spot on largely because a lot of them are not entirely practical. Daredevil’s original costume though is a skin-tight body suit. Unfortunately trading spandex for leather wasn’t all that comfortable, especially to fight in.

9. Michael Clarke Duncan had to gain 40 pounds for his role.

He was  big man to start with, but asking him to get bigger seemed like it might have been over the top. Thankfully he didn’t have to much except train and eat. Even then there were tricks to make him look bigger.

Both lead actors read for each others roles to be honest. It’s actually quite alright since playing Bullseye allowed Farrell to use his natural born Irish accent.

Daredevil was set out to have a modest budget, but when Spiderman and the X-Men showed that superhero movies could pull in the buck Daredevil got a huge boost.

6. Jennifer Garner and Ben Affleck both had to wear contact lenses.

It’s kind of obvious why Affleck had to wear them due to his character’s condition, but Garner’s were more for looks than anything.

5. The billy club was the wrong color.

Daredevil’s trademark billy club is pretty distinctive and is easy to miss if you’re not really watching. Fortunately it was an easy fix.

4. Daredevil’s radar sense is all wrong.

It’s not so much wrong as it is inaccurate. Daredevil doesn’t rely on echolocation as you see in the movie. His blindsense isn’t like sonar. Instead he uses a signal that is emitted by his brain to visualize the area around him. And despite his heightened sense of hearing he doesn’t use it to pinpoint his location or that of others.

3. Elektra’s role was almost taken by another actress.

Jessica Alba and Natalie Portman auditioned for the role of Elektra. They were just two of many that coveted the role, but Garner was obviously the one that impressed the director.

2. It took six years for development of this film.

This film was being worked on as early as 1997 but in order for every detail to be right it took until 2003 for it be released. Maybe they should have taken a couple more years.

During their fight scene on the playground Garner actually connected with one of her kicks to the side of Affleck’s head. It didn’t knock him cold but it did make him black out for several seconds.

So how many facts did you know?