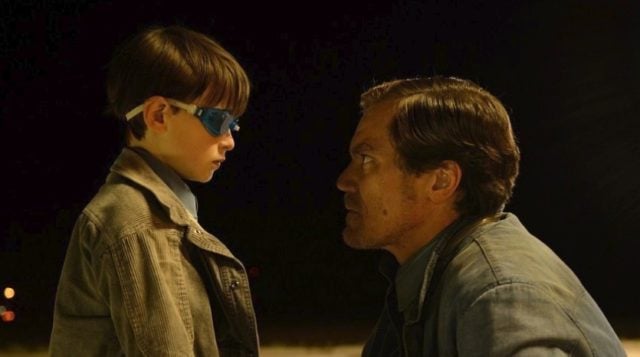 After discovering that his son has special powers Roy takes Alton and goes on the run from both the government and a cult that’s following not too far behind them. It’s a chase that they just can’t win but are bound to try anyway. Eventually both the cult and the government find them, but the extent of Alton’s powers continue to grow as he starts to lose control of them. At one point, after reuniting with his mother Sarah, Alton escapes while Roy is taken prisoner. Eventually however, before the screen fades to black, there is a int that Roy is possessed of the same powers that his son has.

It’s kind an odd film but it’s worth watching.

10. Adam Driver‘s first day on set was when he got the news he’d be in Star Wars.

He must have been floating on cloud nine to hear the news. First he’d have this movie to shoot and then he’d be off to one of the biggest franchises in film history.

9. The idea was originally make this and independent film.

Nichols didn’t want to work with Warner Bros. at first but when they came to him and offered to put up the money for it he didn’t hesitate too long.

Normally she’s pretty dolled up but in this one she went au naturale and looked pretty good too.

Some films don’t seem to require a great deal of effort or reshoots that can take forever to complete.

6. Joel Edgerton and Adam Driver have both been in Star Wars films.

Joel Edgerton played the role of Owen Lars in the second and third prequel when he meets Anakin and Padme and then when he and Beru take Luke into their care.

5. Like Superman, Alton gains his powers from the sun.

His powers are a little hard to describe but they’re very forceful it would seem.

That’s not a huge budget for a film considering that a lot of movies have been reaching upwards of at least close to $100 million for everything that need to be brought in.

He sounds like the type that enjoys doing Indie movies or something similar but this time the studio felt like backing him so it seemed a foregone conclusion once Warner Bros. wanted in on the project.

It’s not for certain what happened to push the release date back but there are a lot of different variables to consider when releasing a movie to the public and just when it’s best to do it.

1. There were a few Superman references in the movie.

The one that’s the best is the fact that Michael Shannon played the maniacal General Zod, and was absolutely terrifying in his role.

This was a decent movie, it’s worth recommending to anyone that wants to watch a less than conventional film for everyone.