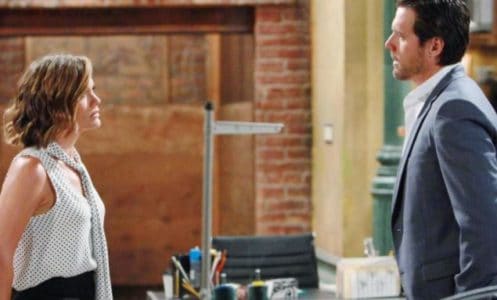 Young and the Restless fans know that Victor is a good person to turn to if you need your life destroyed. He’s not particularly interested in anything but his own agenda and how it benefits him. He doesn’t care who he hurts along the way so long as he gets precisely what he wants. His only concern is Victor, Victor, and Victor. So when he takes it upon himself to ask Nick to spy on Chelsea to find out what she is learning as she searches for Chloe to get revenge on what she did to her husband, Nick will do it. Not because he wants to make his father happy, or because his father is important to him, but because he knows his father will destroy his life if he doesn’t do precisely what he says. And that is going to prove to be the beginning of the end for he and Chelsea.

You see, Victor will do what he wants regardless. The moment he feels that Chelsea is too close for comfort, he won’t hesitate to throw Nick under the bus and make it his mission to get him to become the focus of her rage. He might tell Nick’s lady that he knew all along what was going on, where Chloe was located, and what was going on with the truth. It won’t end well for Nick and Chelsea, and no one is going to care. This is certainly going to prove true when Adam comes back. Victor just wants his family to go back to listening to him rather than lecturing him, and he won’t care who he hurts as a result. He must remind them who is the boss in this family — and his favorite way of doing that is by making them all pay.

If he does feel she’s doing something she shouldn’t do, will he tell Nick that Christian is not his son? She’s known for a year that the boy is not Nick’s, and that Adam and his brother’s ex slept together when they were all on a break, and that the baby is his. She knows this, and Victor knows she knows this. Will she find this used against her?