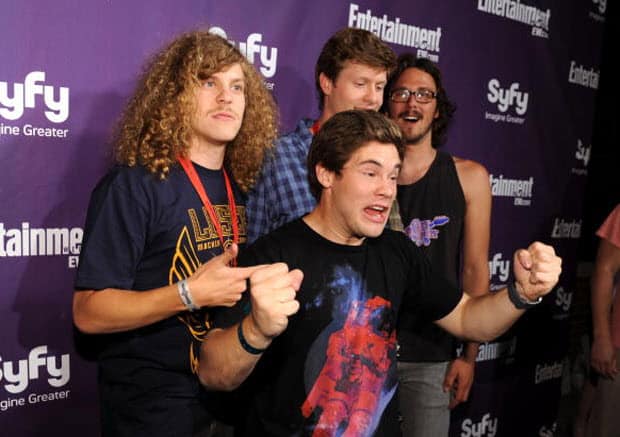 Last night the Workaholics returned for what I thought was one of their funnier episodes of this season. It was probably my favorite, to be honest.  Last night just felt like an authentic Workaholics episode that had Adam, Blake and Ders trying to accomplish something and then thinking they have figured out a way to dramatically improve their lifestyle and make more money.  I love watching them start to accomplish something, I like it when they start to succeed, but then immediately let the minor success get completely blown out of proportion in their minds and have everything come crashing down, which is exactly what last night’s episode, “We Be Clownin’,” did.

The show immediately opens to a hilarious montage of the guys all jumping into the pool passing a ball between one another to pull off crazy pool trick basketball dunks. Adam ends up throwing the ball over the fence, because he’s got too big of guns, where they find a heap of scrap wood and metal. Of course they think it’s a good idea to build a rooftop slide into the pool to create even more epic of slam dunks, but when Adam takes the first run he falls victim to a few minor splinters in his back and the guys realize that the slide needs to be sanded down. This was a hilarious opening; probably because of how realistic it felt for these guys to be occupying their time with something like this.

Ders gets the idea to use Task Rabbit, a website where people post miscellaneous jobs they need finished and anyone can reply with how much it will cost the poster; a.k.a. the perfect way for them to lazily have their pool slide completed. Someone replies to their post, but it’s going to cost $150, which they don’t have.  This leads them to search Task Rabbit for other posted jobs that they could complete to save up what they need, and somehow decide that the best option is to become clown entertainment for an eight year old’s birthday party.

This really sets the episode in motion, because they are actually a funny clown trio and begin to get paid. Blake does awesome face paintings, Adam has a routine with his puppet Nurse Jackie, and Ders walks around on stilts doing a hypnotism act.  It’s funny, and like I said, it’s fun to watch them succeed; but before we can even watch more than two parties, the guys are already celebrating with the normal drugs and booze, while ghost riding their car. They make it onto a blog called, “Rancho Kidsamunga,” and suddenly their clown act is the hottest thing to have at local children’s birthday parties.  So here’s the funny part where their egos shoot through the roof and the guys think they own the entire town, nothing can go wrong, right?

Of course they decide to “live the Wesley Snipes life” and strut around in complete denim outfits and a red convertible Mazda Miata. Yes, they love that Miata life, maybe even a little too much because they show up to Jillian’s niece’s birthday party still wasted and two hours late — which got them replaced by TK; the Michael Jackson impersonating, basketball dunking, original birthday king of the town. He’s actually a nice guy, but Adam, Blake, and Ders don’t care and reveal their big finale; fighting a cobra.

They only end up making drunken fools out of themselves and end up losing their biggest client to TK in the process, whose child is having a birthday party the next day. They show up and secretly spy on the party until Blake finds the opportunity to army crawl past everyone so he can cut some of the mini trampoline springs to sabotage TK’s big dunk finale. However, the birthday boy decides that he wants to dunk; he snatches the ball from TK, breaking for the net, hitting the trampoline, and smashing straight into the base pole of the net. This gets TK fired without being paid, and the guys shortly bask in the glory of eliminating their competition. At least, until they realize he has a wife and baby, and then even find out that he’s never had a birthday.

This leads to their big fighting a cobra trick, but, of course, the cobra is missing from the basket, and it’s pretty clear that they had no idea what they were doing with this clown routine.  In the end, getting TK fired only gives them someone to complete building and sanding their makeshift pool slide. As the episode begins to come to a close, it’s finally time for them to pull off the ultimate pool dunk; Ders bounce passes the ball over to Blake, Blake then catches it midair and passes it back to Ders; Ders will catch the ball, MIDAIR, and underhand pass it over to TK. TK will volleyball bump it up to Adam, who will bomb down the slide, catching the ball, MIDAIR, for the TOMAHAWK SLAM DUNK.

This is it, the big moment we’ve been waiting for, and everything starts off smoothly, but the slide falls out from below Adam right before he is about to descend down it to finish the dunk, which makes them realize how unsafe this whole idea was in the first place and that they should probably just go back to what they do best; getting intoxicated. I loved it; the episode was hilarious and took us through this big build up that turned out to be nothing but another useless adventure that had me laughing from start to finish.

What did everyone think of “We Be Clownin’?” Let me know why you did or didn’t enjoy it!