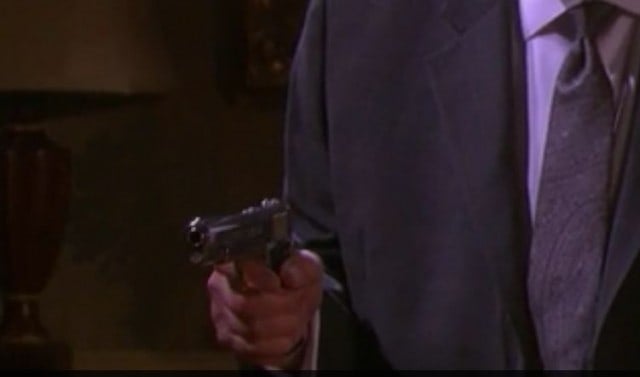 On Monday’s Days of Our Lives, it’s all about the past. It seems some people find it difficult to get rid of the past, let it go and make sure that it no longer plays a significant role in their lives. The past is haunting almost everyone in Salem, and every twist and turn in the story is more dramatic and jaw-dropping than the one before. Monday brings with it a murderous confession from Hope to the Salem police, but even that is not the most dramatic blast from the past this week offers up.

The week begins with a hello between brothers who haven’t seen one another in quite some time, but it doesn’t strike us a very friendly kind of hello considering the typically friendly greeting is uttered by Victor as he casually points a gun at his brother, Deimos. It doesn’t appear that either of these two are happy to see the other, considering Victor played a part in sending his brother to jail. But, like most small towns, Salem is not without a little family drama. It turns out that both Victor and Deimos might find it quite entertaining to partake in schemes that are less than ideal, and that’s probably what brings Deimos back to town after being released from jail. Will Victor finally pay for some of his personal wrongdoings, or will he beat his brother yet again at his own game?

It wasn’t the Colonial in the ballroom with the candlestick; but it was Ava in the hotel room with a candlestick. Last we saw of her, she forgot her illness — and her manners — and hit Kayla over the head with a candlestick after Kayla caught Joey in her room and threated to tell Steve. Since Ava isn’t interested in Joey, but rather working to convince Joey’s father that he is also the father of her baby. She wants his help finding him before she dies so she can see him one last time, but Kayla wasn’t falling for any of that.

Now that Kayla is lying unconscious on the floor of Ava’s hotel room, we can safely assume she’s missing her flight to D.C. Slated to testify before the National Donor Organization for illegally give a heart to a patient without first seeking permission and reassured from the Organization, she faces serious consequences, including the loss of her license. Will the Organization think that she bailed on her testimony? How will that affect her future, her life and her testimony? We know one thing for certain; Ava doesn’t care so long as Kayla is out of her way and not trying to come between Ava and what she wants from Steve. She says it is just to find a baby they allegedly had together but knowing Ava, there is no way that’s all she wants. Will Steve find out and Joey and Ava, or will Kayla not recover in time to tell him about their association.

Will Kayla wake up and go straight to Steve about Joey and Ava, or will Ava attempt to take things a step further with Kayla lying there unconscious? It turns out that we might not know much about what happens to Kayla, but we do know that Steve finds out about this alleged tryst and he is not pleased to hear the news. But just who is he angry with? Joey, his son, or Ava, the woman attempting to use him to her own advantage?

Jenn and JJ are not amused that Abigail and Chad are set to wed; and Chad is upset about it. Abigail does wish her family would support her decisions, but with their personal past and their history, it seems as if that would be a mistake on their part. Has Chad really changed, and will he be able to convince his future in-laws that he’s not the same man he once was? Will it matter anymore now that Jenn is lying in Chad’s arms after falling down? She says she’s in pain, but we have to say we doubt her motives. Perhaps she is looking to catch Chad in a precarious situation so that it looks bad to Abigail.

In other romantic news, will Belle and Philip finally decide to take things a step further, or will Belle decide that she’d much rather stay with her husband after all? Shawn, it seems, wants precisely that. Belle is conflicted about the decision, and isn’t likely to come up with an answer anytime on Monday. There are too many factors to consider, and it seems that the past is haunting her, too; go back to her husband despite the history of their marriage because the couple has child, or go look toward the future?

See what other surprises the past plans on throwing at the people of Salem on Monday’s episode.