Home
Movies
Will The Watchmen Ever Meet The Justice League In The DCEU? 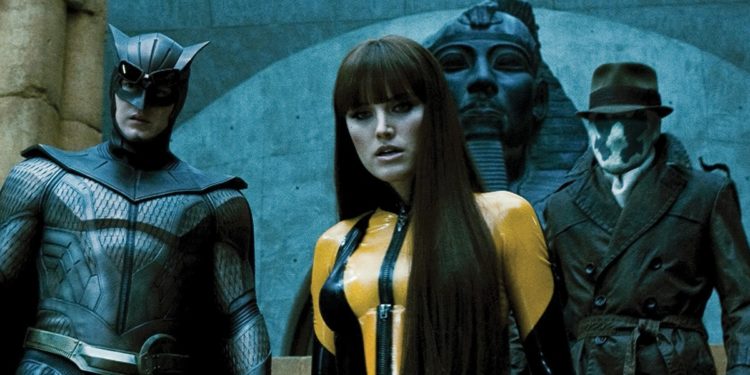 If you’re a fan of Alan Moore, you should very much know of The Watchmen, arguably his most celebrated graphic novel. The story behind it was meant to be a dark, dystopian twist on the superhero genre set in the ’80s when the Cold War was at its height. I mean, if you know anything about Alan Moore’s writing, you know exactly what that’s like. In short, it’s pretty messed up. Yes, he wrote a graphic novel about superheroes, but these aren’t the kind we all like to root for. Most of the heroes in this comic universe are deeply morally compromised individuals with mental health issues. The ones who are the most noble are either retired or past their prime. The ones who are still active are actually breaking the law, as the public lost trust in costumed heroes. But that doesn’t matter to some.

Hence, Rorschach, the coolest member of the Watchmen. He’s sadly dead now, with no chance of coming back, but you never know in the realm of comics. And on top of that, this is still DC Comics. Anything can happen. For example, is it possible that the Watchmen can crossover with the Justice League, the most popular superhero team of DC? Well, it happened in the comics, so I don’t see why it can’t happen in the DC Cinematic Universe.

Let’s begin with what we know. For one, The Watchmen already got their own live-action movie four years before the DCEU began with Man of Steel. Thanks to the famous Zack Snyder, who has proven to be a massive comic book nut, he delivered a different kind of comic book movie that no one saw coming. Well, at least I didn’t, considering I watched the movie before I read the graphic novel. I just wanted to see it because I love the superhero genre and I really like Zack Snyder’s movies. He’s a great director and he already made a graphic novel adaptation of the famous Frank Miller story, 300. And again, I watched that movie before I read the book. But when I did check out the book, I noticed how closely Zack Snyder followed the story.

He did pretty much the same thing with the Watchmen. He barely deviated from the book and emphasized on the most significant moments from it. In typical Zack Snyder fashion, he made sure there was a lot of intense action scenes with a lot of slow-motion and graphic violence. Personally, I thought that’s what made the Watchmen movie very fun to watch. Yeah, it clearly wasn’t for everybody, but hey man, it’s based off a violent comic. Can you blame Zack Snyder for honoring the source material? I certainly won’t, but I always wondered why their story was never continued.

I think Alan Moore wasn’t too big on the idea of writing a sequel, but the Watchmen ended on a cliffhanger. What happened to Doctor Manhattan? Did anyone ever really discover Rorschach’s journal? Will Ozymandias ever be punished for his crimes? If you wanted to know the answers to those questions, you can either check out the Watchmen show on HBO Max or read the Doomsday Clock comic series. Written by the famous Geoff Johns and penciled by Gary Frank, one of my favorite comic book artists, the Doomsday Clock series marks a significant turn in the DC Universe.

For those who remember the 2016 Rebirth event, can you name the person responsible for it? That would be the near-naked, blue-skinned, very omnipotent John Ostrander, aka Doctor Manhattan. Talk about messed up twists, right? I couldn’t believe it when I first read it, but yes, Doctor Manhattan is pretty much a bonafide villain in DC Comics now. The story itself really expands the Watchmen universe in a very unexpected way. There is a new Rorschach who isn’t Walter Kovacs, Ozymandias is exposed for his crimes, and there is an unexpected return of a certain Watchman we all thought was dead. It’s a very mind-boggling story, but it was definitely a fun read. And yes, we finally got to see members of the Watchmen interact with the most popular DC heroes.

Speaking of which, the Doomsday Clock story kicked off with a story about Batman discovering The Comedian’s smiley face button. He and Flash do some investigating and this leads them to discovering the Watchmen universe. The button is where it kicked off, and speaking of that, I’d like to point to a recent post related to the upcoming Flash movie. We got to see a small sneak peak of Michael Keaton’s new Batman costume. All we saw was his famous Batman chest symbol with the yellow oval surrounding the bat symbol. Oh, and there was also a drip of blood oozing down the yellow oval part.

When you look at that post, it’s pretty hard to not think about The Comedian’s button. His smiley face button had a drip of his dried blood on it for most of the Watchmen story. Now okay, this sounds like over-speculation, but is is possible that DC is considering having the Watchmen crossover with the DCEU heroes? A year ago, I would say that sounds like an outlandish idea, but after hearing about the ideas of the Multiverse, I can now say it’s possible. On top of that, Barbara Muschietti has said to expect multiple DC movie cameos for the Flash. Maybe the comic geek in me is just getting too crazy, but I wouldn’t rule out seeing one or two of the Watchmen.

And hey, how cool would it be seeing Doctor Manhattan meet Superman? Superman is known for being one of the most powerful DC heroes, but Doctor Manhattan can obliterate people just by sticking his hand out. If he does crossover and he decides to turn bad, the DCEU heroes will certainly have their hands full. They can find help with a rogue Ozymandias or the second Rorschach. In Doomsday Clock, Reggie Long became the new Rorschach and was among the first to crossover into the mainstream DC Universe. The DCEU can do at least something similar, given the popularity of the Rorschach character.

What do you think, Watchmen fans?