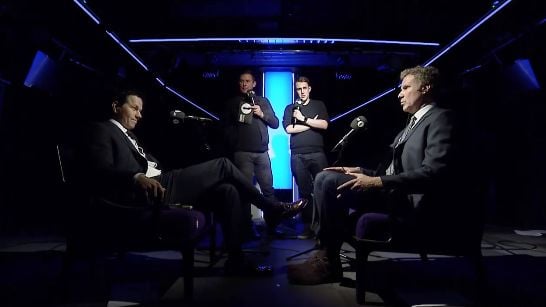 Here in the United States we don’t get to see all of the funny stuff that celebrities do overseas.  While they engage in their fare share of humor, nothing is funnier than seeing a celebrity in a foreign commercial making a fool of themselves or catching some of their best moments on foreign talk shows.  While this isn’t exactly that, BBC Radio Show host Scott Mills has a segment that’s incredible which is called “The Insult Game.”

For some reason this clip passed me by.  It’s from 2015 when Mark Wahlberg and Will Ferrell starred in the movie Daddy’s Home which if you haven’t seen is surprisingly funny.   However it’s not nearly as funny as Wahlberg and Ferrell playing the insult game on Mills’s show.

It’s extremely rare that you’ll get to see Will Ferrell crack up in real life so it makes you laugh even harder.   The crazy thing here is that I think Mark Wahlberg is technically more skilled at insults, but obviously without Ferrell this video wouldn’t be nearly as hilarious.

If the Oscars tonight were just a whole bunch of these, I’d actually pay to watch it.