Home
Anime
Why You Should be Watching The Quintessential Quintuplets 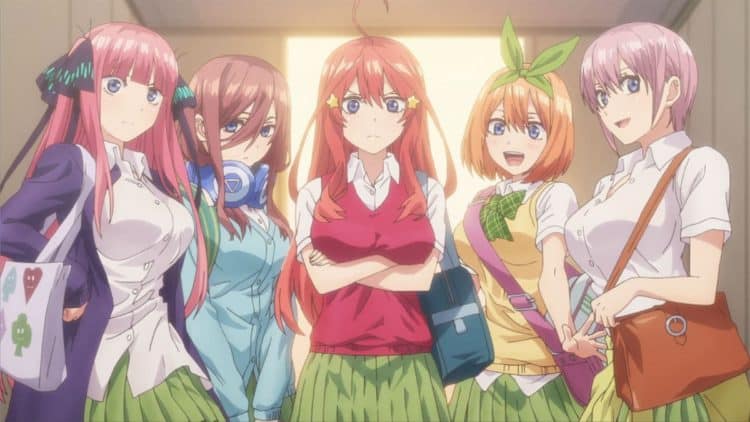 The Quintessential Quintuplets aka 5-TÅbun no Hanayome began on 5/5/2019 (a little inside joke from the producers no doubt) and just finished its first season in March of this year and already has a huge fanbase. It’s not hard to see why. The long-suffering protagonist, Fuutarou Uesugi, finds himself in a tough position when he’s hired to tutor five girls who are quintuplets. In addition to being sisters, they share very little in common, except for one vital thing, none of them want to study. The wealthy Nakano Quintuplets have terrible grades and worse motivation, but if he wants to get paid Fuutarou Uesugi is going to have to find a way to make it work.

SPOILER ALERT!!! There are spoilers coming!

The poor hero of the story is a study in stress, intellect, and family devotion. High school is hard enough without other problems. When you’re brilliant, it can work to your advantage, but sometimes it comes with even more challenges. He finds himself mostly alone with his single father after the death of his mother. Futaro has no real friends, and his father has racked up a considerable amount of debt. To help out, the entirely practical, no-nonsense Fuutarou Uesugi takes a job with a wealthy family. It pays five times the going rate for tutors, but that’s because they have five children. The Nakano Quintuplets are not easy customers, but he has to teach them and help them raise their grades if he wants to keep the job he so desperately needs to help keep his father solvent. The struggles of a caring teenage boy might not be the first thing you think of when seeking out a dynamic and entertaining new show. However, Fuutarou Uesugi is a worthy hero. Though he has no superpowers, it will take all his might to make things work and save the Nakano sisters grades and his father at the same time.

One of the most essential parts of any high school drama or comedy, no matter where in the world it comes from is the clashing of hormonal personalities. Everything seems so serious and vital when you’re in high school, and it can lead to incredible drama even in the real world. Teenagers, whether animated or live action, fiction, or reality, have some things in common, and The Quintessential Quintuplets expresses that dynamic beautifully. The very first episode features the protagonist Fuutarou getting in an argument with a girl who has stolen his lunchtime seat. Naturally, since it’s TV, he is hired by her family at an exorbitant rate to tutor her. As though this wasn’t bad enough she’s a resistant student, and she’s one of five identical sisters. His attempts to smooth things over are only exacerbated by his need and her dislike of him, which carries over to his interactions with the rest of the sisters at first.

Tutoring a pair of twins would be hard enough, but when you have five charges, it can be utterly ridiculous at times. The five Nakano sisters are very different people. Each has her own quirks and preferences. As a cohesive unit, they are a tutor’s nightmare.

More than merely a ‘good show,’ The Quintessential Quintuplets is an award winner. We admit that awards aren’t everything. There are plenty of overlooked shows that never win a thing, but a show that is as critically acclaimed as this that also wins awards is a pretty good sign. TQQ took home the Kodansha Manga Award this year amid some pretty stiff competition. Other winners included a sweet story of a gay couple in Tokoyo called What Did You Eat Yesterday? (KinÅ Nani Tabeta?) and Kosaku Shima series Kenshi Hirokane which has been ongoing in print since 1983.

The humor in The Quintessential Quintuplets takes the mundane situation into a higher realm. While you probably won’t see anything too groundbreaking, the story is a delightful romp through the trials and tribulations of a poor highschooler’s life and work. You’ll find yourself rooting for Fuutarou as he struggles to create five different plans to get the ridiculously intransigent sisters to their graduation day. The girls are well fleshed out (no pun intended) and have their own individual personalities and styles in a way that makes their interactions believable and three dimensional for viewers. If you like a good harem-esque teen rom-com, then you should already be watching. Catch up now before Season Two drops in 2020, so you won’t miss out on any of the fun!