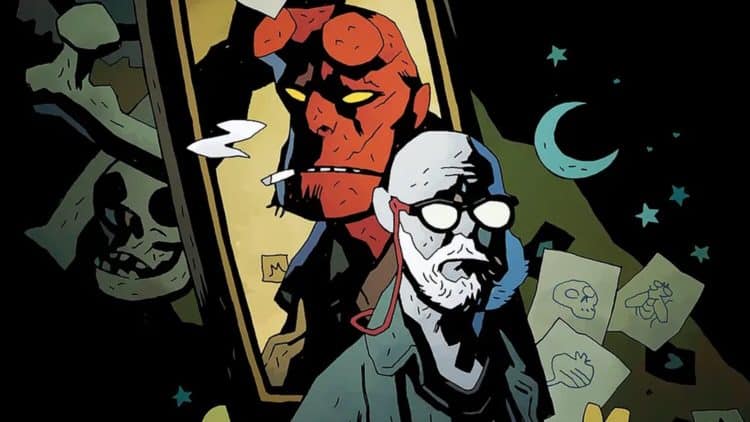 It’s a fair bet that a lot of people know who Hellboy is and what he’s all about, and those that don’t either aren’t into this type of entertainment or simply haven’t come around to it. But the idea of watching how Mike Mignola came up with this character is intriguing since as most people should know by now, ideas can come from just about anywhere. Watching something that can deliver at least a glimpse into the mind of the creator of a popular character might give a better understanding of who the character is and why they became an important part of pop culture at one point. Or it could just be an interesting look at how another person thinks and how the creative process works in their head. Hellboy and the many different creatures that have appeared in his story over the years have been amazing and dark as many would agree since the content was meant to be darker and more to the point than a lot of comics tend to get at times. The most recent appearance of Hellboy on the big screen has kind of divided the fanbase a bit since some feel that David Harbour managed to convey the necessary points of the character that were needed, while others feel that it wasn’t even close to what was desired. From a personal standpoint, it wasn’t that horrible, but it could have used a little more cohesion in the storyline, perhaps a few extra moments that might have made it feel a bit more connected.

In fact, some folks have even said that the comics have been far better than the movies, though some are willing to admit that Ron Perlman did a great job in the role and would love to have him back. The only problem now is that Ron Perlman is getting pretty old and might not even want to get back in the suit and makeup, since the process to make Hellboy look as genuine as possible is apparently kind of grueling. Whether Hellboy is bound to come back to the big screen or not is unknown at this time, but his time in the comics has definitely been valued far more than his cinematic appearances quite often, for various reasons no doubt. It’s fun to wonder just how long it took for Mignola to come up with this character and whether he came up with every character trait, physical and psychological, or if he had help along the way. Creating even one character is a big task after all, let alone creating several and having a full profile for each one.

Getting a glimpse inside the mind of someone that creates a character such as Hellboy is bound to be a little strange for some folks, but likely as not the feature will go over the process in a way that makes sense for a lot of people instead of confusing those that want to learn. The thing about creating monsters though is that everyone has their own process since some tend to think about the most nightmarish thing that they can imagine in order to bring forth an image while others don’t have to think of much as they take what they see in the real world and start to build off of it. Creating a half-human, half-demon hybrid like Hellboy is something that could have a lot of explanations, but the program will end up showing people what they need to see, even if it’s not something that they fully understand. Creation is sometimes a messy and uncertain thing, and with Hellboy, it was bound to be something that would become a little disturbing at times but would still manage to entertain people no matter what. The character has been around long enough to prove that much since a lot of people have been following Hellboy since he first came out, while others are just getting turned on to the idea of the red-skinned antihero.

Watching the program could be a big eye-opener for a lot of people that feel that they know what it means to start up a story since it might show them that there’s a little more to it and that they could take a few pointers from Mignola’s work, especially since he’s one of those that rose to such prominence in the business and became a name that everyone knows about and someone that people have wanted to work with. When people start learning your name and say that they want to work with you then it’s evident that you’ve become a positive force in the industry and that you’re considered one of the best around, which is something that Mike has managed to embrace over the years. Finding out his motivations for Hellboy should be interesting indeed.