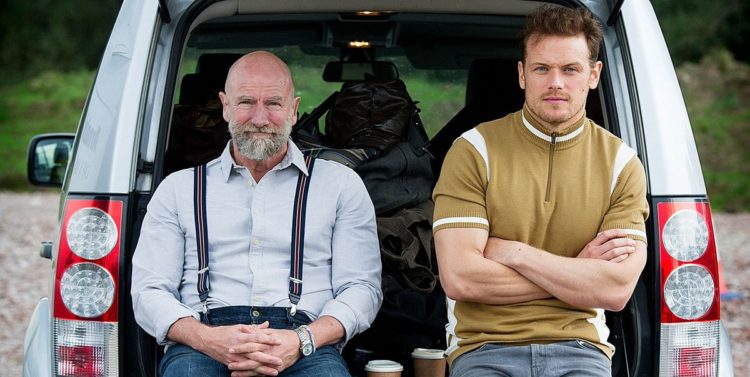 You might think that just because a person is born to a place that they know everything about it, but that would be the wrong line of thinking in a lot of ways since asking any US citizen everything there is to know about America’s long history would likely turn up a lot of blank stares. Of course, in this day and age, you might receive a host of answers that aren’t too pleasing, but the general idea is that a lot of people, no matter where they’re born, don’t know everything there is to know about their country largely because they’re born into one place and within a time period that doesn’t adequately cover every bit of history that they would need to know. That’s why Sam Heughan and Graham McTavish are going to be touring around their native home of Scotland to see what there is to see and experience as much of the culturally-rich land there is to show to those that might know next to nothing. But coming in February if a person is able to access Starz, they’ll get to see a great example of the Scottish culture that is actually quite interesting if a person wants to dig into it and find out what’s there. Like many cultures, the Scots aren’t perfect and they did manage to muck things up with many other people at one point in time. But the fact is that like so many others that have faults, the land they come from is beautiful and the culture they cultivated is definitely something worth taking note of while watching this show.

Watching the guys learn of the Highland Games and various other parts of the country will be kind of fun, to be honest, and the fact that they’ll be in kilts for a good part of it might sound awkward to a lot of people, but it’s bound to be a lot of fun since it already sounds like something that will be able to keep the attention of those that are interested for a little while. Some might still think that there’s no possible way that people who are born in a region wouldn’t know just about anything and everything they could, but it’s easy for a person to ask themselves if they know everything about the state they live in or the country they reside in. It’s entirely possible not to know that much about a place that one is born into, even if they happen to stay in that spot for a long, long time.

The thing is that a lot of us are born to one spot and don’t tend to move a lot unless we happen to go on vacation or find a way to get out and explore the world around us in our younger years. Getting out and experiencing the place you call home is sometimes the best way to get to know it since even with a Google search and all the information at hand, staying home and trying to read up on it all won’t tell a person enough about their homeland. All the history reports in the world won’t give a person the feeling of a battlefield where the future of their country was fought for, where people sacrificed everything in order to push an idea, gain more freedom, land, whatever the goal might have been. There’s more history that can be felt roaming the landscape than reading a book, and these two men are going to show people what lies along the path they’ve chosen to travel, and already it looks and sounds like something that’s going to be a lot of fun and possibly informative since if a person is truly interest in Scotland and their history then it’s definitely going to be worth the time to sit and watch this. For some, it might be another humdrum look into history that they don’t want to bother with, but for those us that happen to enjoy history since it has a great deal to offer at a pace that we can enjoy, this show is bound to be something of a treat.

Each episode will be around a half-hour long and there will be eight episodes in the season. In a big way, this almost feels as though it will be a one-season wonder, but there’s always a hope that people will be interested enough to want to see it brought back for at least another season or so since Scotland does have a very rich and interesting history that could hopeful last for a bit longer than one season. But we’ll have to wait and see what the decision will be since while the trailer looks like it might be interesting, it usually comes down to see what’s really there to be offered.