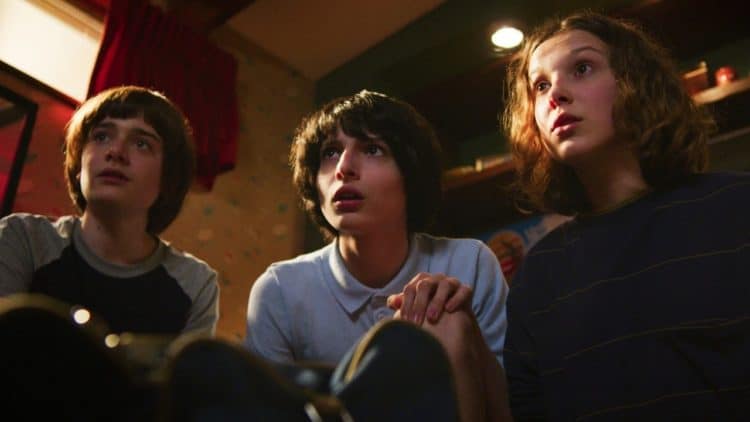 Not a lot of people are capable of seeing a silver lining when it comes to the current pandemic, but Kara Hedash of Screenrant at least points one thing that could benefit those that are waiting in baited anticipation for the next season of Stranger Things. If you didn’t happen to notice in season 3, the kids are growing up in a big way and are swiftly outgrowing the narrative that the show has already established, meaning that they’re not little any longer and they’re bound to need a story line that can explain why they’ve grown so much. This is just one reason why the halt to production is a good thing since it might slow down the entire process and force the Duffer brothers to take a look at the story and wonder whether or not it might be better to advance Stranger Things into the 90s at this point in order to keep from confusing the fans. Advancing the story might also show a few interesting effects as to what happened after Joyce Byers and her family moved away and how the relationships between the core group of kids was strained and possibly stretched in the years following. But really, one of the biggest things to worry over is the fact that the kids are growing up, changing, and can’t possibly be expected to act THAT much younger if the story didn’t change up that much.

At the moment a lot of fans were hoping and praying that they’d get to see the next season of the show in 2021 at the latest, but as of now with the studios shut down there’s not a lot of chance that 2021 can happen unless things turn around quickly. 2022 is looking like a better possibility since the return to show business is an event that might not come for a while, as the coronavirus has pretty much shut down just about everything that’s not essential. It’s amusing, but in an ironic way, that it took a pandemic for people to realize that Hollywood and pro sports figures aren’t quite as essential when it comes to running the world. Don’t get me wrong, like everyone else I’m hoping to see the whole thing start up again, but hopefully this time with a bit more humility as the understanding is that when the stuff hits the fan, entertainment isn’t going to be seen as a huge priority, and neither will pro sports. Corrine Heller of E! News has more to say about this. With that being said it’s a hope that all those who are affected by this pandemic, from the top all the way to the lowest person on the ladder in the entertainment business, is doing what they can to weather the hardship and can find something to occupy their time and keep the lights on.

There have been plenty of rumors and theories about season 4 already and one that is hopefully never going to happen is the idea that Billy will return, since his sacrifice in the third season was a redeeming end to an otherwise villainous arc that shouldn’t just be tossed aside in order to bring back someone that fans liked because he was that bad. If he is brought back it should be for a flashback, a memory of some sort, but little to nothing else. It’s not a mark against Dacre Montgomery really, as he played the part very well and was entirely easy to believe, but keeping a character’s sacrifice as their one last great moment is something that isn’t done often and unfortunately isn’t always taken with as much dignity as one should be able to muster. Too many people tend to raise a stink about one character or another that dies, while easily ignoring others, and tend to get others to think the same somehow. Billy died, he was wounded in a way that offers no save, no sudden and hopeful rescue that can bring him back. He was a prick throughout much of the time he was on screen but thankfully came back and was able to do something right before the end, let’s leave it there and say that he managed to redeem himself in a way that was nothing short of heroic. Hannah Mylrea of NME has something else to say about this subject. Heck, even Hopper should have been allowed to check out at some point, but of course people might have rioted had such a thing happened.

It’s definitely interesting to think what might have happened had Hopper actually been given the type of death that a lot of us were thinking might have happened. After all, ‘the American’ that was spoken of could have been anyone. But nope, Hopper is back, there’s a rumor that some want Billy back, and at this point the Duffer brothers have enough time to see just what they can do with the story moving forward to make things happen.