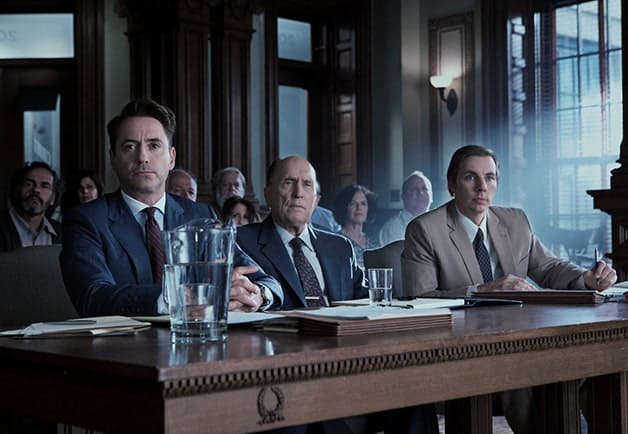 Thankfully for the sake of this story there was no insult or even disrespect to talk about, as the idea that Robert Downey Jr. decided to use Robert Duvall instead of Jack Nicholson in The Judge was due more to a desire to see the script remain unaltered in order to get the whole story out. For those that don’t remember this movie or haven’t seen it yet, The Judge is the tale of a man that is estranged from his father due to relationship issues in the past. The main character, a lawyer who hasn’t seen eye to eye with his father in years, is called back home after the passing of his mother and reconnects with his two brothers while still not getting along with his father. Unfortunately as he’s on the plane to go home he’s called back as it appears that his father has struck and killed a man that he sentenced years back and has no memory of the incident. When it finally comes out that the judge likely killed the man on purpose, has been taking chemotherapy due to a battle with cancer, and is having memory loss that is associated with the chemo treatments, the lawyer finds the need to defend his father despite his ill feelings towards him. In the end he reconciles with his father, who finally approves of his life and how he’s turned out before dying shortly after. It’s a touching story really that brings up a lot of emotion and keeps a person from feeling too good or too bad about any one character.

But the reason for ditching Nicholson for Duvall was pretty simple, Nicholson wanted to make too many changes. RDJ and the director David Dobkin were being very protective of the screenplay and didn’t want to change as much as Nicholson was wanting, which was a risky move since having Jack Nicholson in a movie is bound to make it that much better. But really, getting Duvall wasn’t a downside since to be fair he’s a great actor and has the acting chops to pull something like this off. The only difference is that Nicholson has a very different energy than Duvall, and brings a different experience to any movie he’s in. Even in his advancing years he’s still something of a maverick in a movie, someone that will go his own way no matter what the script says. He can keep to a script and will do so obviously, but there’s a good chance that he’s going to want to change things up a bit as well. This wouldn’t have worked since RDJ and Dobkin didn’t want to change the script, as they’d been working on it for too long. Plus, the idea of Nicholson and RDJ in the same movie feels kind of like what might happen if two live wires were placed in the same space. They might hiss, sputter, and spark when connecting, but it wouldn’t always be a good thing. It would either be too much energy in one movie, or it would create several moments that were simply too much for one picture. In other words, two personalities such as RDJ and Nicholson feel as though they might have been too much for this movie.

Casting Vincent D’Onofrio was a good decision as well, since while he’s also another individual with frantic and sometimes inescapable energy, he’s definitely a midway point between RDJ and Duvall, who, with no offense intended, is far more low energy than the two men that played two of his three on screen sons. This is Duvall’s charm though, as being low energy calms down the pace of the movies he’s in, bringing the movie a bit of calm when others around him are picking up the pace with their attitude and acts while he sits as a restful individual in the midst of it. As he’s gotten older this feeling has only increased as he is a calming presence in just about any movie, even if he happens to play the part of a rather cantankerous old man in movies such as this and Four Christmases with Vince Vaughn and Reese Witherspoon, among others. Duvall was likely the perfect choice for this movie largely because the level of energy in the movie was balanced in the main characters, and was therefore able to keep a temperate pace and develop the relationship between the father and the sons as it went along. The reconciliation of the father and his son at the end of the movie was particularly nice, though it does feel as though Nicholson wouldn’t have quite pulled this off either, as his energy is just a little too wild at times, and slowing him down isn’t just hard to do, it’s kind of a detriment to any character he plays.