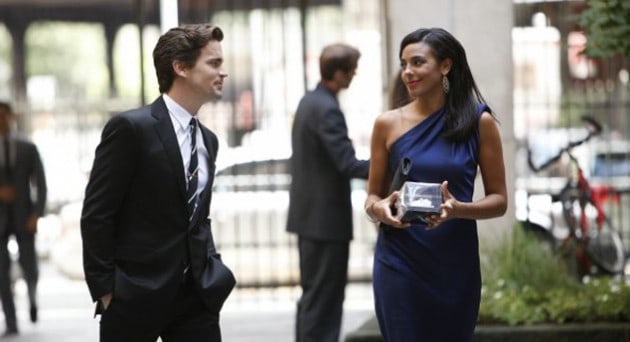 Peter and Neal have been through quite a lot together ever since Peter apprehended the ex-con and made him his C.I., so it’s interesting to see Neal work a case without Peter in this episode of White Collar as our Agent Burke prepares for a special weekend with Elizabeth to celebrate her birthday. Peter gets her a special birthday present and even flies in her parents for the occasion. However, I get the feeling that he dreads seeing his in-laws, given that he gets along with his mother-in-law but is afraid of his father-in-law because he is a psychiatrist and can ask Peter questions about his life before giving him the “psychiatrist glare.” Turns out that Peter does know what it feels like to be interrogated by someone. Even if is just his father-in-law.

Meanwhile, Neal is working a case about a valuable and rare Stradivarius violin that went missing, and he is working it with none other than his ex-girlfriend Sara, who has a secret of her own when Neal finds out about her ex-fiancÃ©/boss at Sterling Bosch Bryan McKenzie, who is apparently after the Stradivarius. Agent Kramer (guest star Beau Bridges) comes back to the White Collar division to go over Neal’s files before his commutation and tells Diana that Neal has got a lot of secrets, the kind that he can’t cover up alone. He suspects that Diana and Peter turn a blind eye when Neal screws up big time. It is a possibility, sure, but I think that helping Neal sweep his deep dark secrets under the rug might put a slight dent in both Peter and Diana’s careers.

I enjoyed watching Peter squirm under the somewhat hawk-like gaze of his father-in-law, and I felt sorry for him when he had to wear that abysmal looking sweater that his mother-in-law made for him (and Satchmo apparently). However, I suppose that he didn’t want to hurt her feelings by not wearing it. It’s fun to watch him be the best son-in-law that he can be without having to suffer the soul-piercing death glare from his father-in-law, Alan Mitchell. It’s different from his usual strong and confident FBI agent demeanor. I also applaud Peter for enlisting Mozzie to help him fix his present for Elizabeth after finding it to be not the fancy slideshow picture frame that he paid for but a CD that had someone else’s wedding video on it. So much for the premium package, huh Agent Burke?

The scene at Bryan’s house was a close call for Sara and Neal when they went in looking for information on the stolen Stradivarius and I was a bit surprised to see that the globe that Bryan has doubles as a hidden compartment when Neal discovers the security tapes from the concert hall that showed a female violinist hand the Stradivarius to a mysterious stranger. It is revealed that the violinist was playing the Stradivarius when she broke a string. She then took it to the resident instrument expert Maurie to repair it, but Maurie ends up being killed by Bryan, who smuggles a carbon polymer string on the violin into the US from China in order to put Sterling Bosch onto the Tech World map. However, his grand scheme doesn’t work as he is arrested for his crimes.

It also looks like Neal and Sara are on the verge of getting back together as old feelings emerge as the case goes on. The two decide on friendship (with benefits, I’m sure), and Sara tells Neal to call her sometime. Let’s hope they can make it work the second time around, and also that Agent Kramer won’t be able to uncover any of Neal’s secrets for Peter and Diana’s sake.