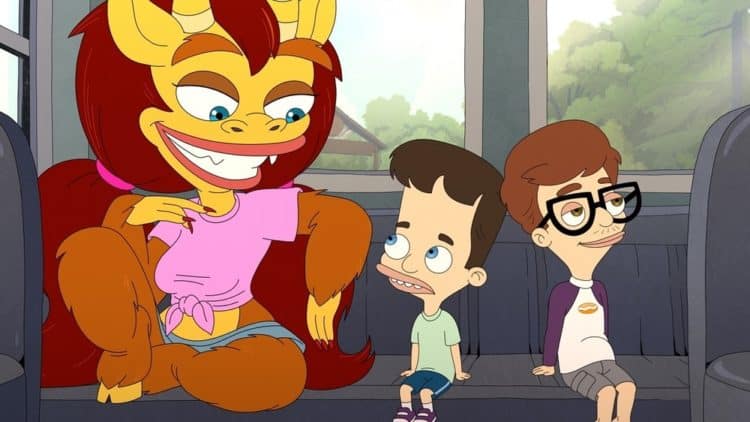 With the release of Big Mouth Season 5, we see characters soaring to new heights and crashing into new lows. It seems like each character is really getting to know themselves; becoming their best selves. It’s with this clarity, and unapologetic authenticity, that we can see which character represents each zodiac sign! Beware: Season 5 Spoilers Ahead!

With your confidence and temper, Aries, you could be none other than Queen Lola Skumpy. She’s a relentless force, even with her quick-to-anger and quicker-to-insecurity shortcomings. You’re not everyone’s cup of tea, but you couldn’t care less. You’re a passionate, competent, and fierce individual, who doesn’t mind a little gossip here and there. You can’t help it that people want to be you, but be careful not to get caught up in your own vibe. As we see with Lola in Season 5; ego can be the death of the things we hold most dear.

Taurus, you’re a natural caretaker, even if you don’t express it in conventional ways. Your adventurous nature and need for keeping things exciting will make sure the people around you know how much you care. You’re reliable, charismatic, and stubborn as they come; just like Diane. She’s effortlessly cool (remember the story of her and Elliot meeting?) and takes care of her family. Even though her version of a mother and housewife is unique, as is her relationship with her husband, she pulls it all off in the end. She’s the cornerstone of their family, without whom they’d be lost.

Jessi is going through a lot in Big Mouth, and it seems that she can never escape the chaos that erupts around her (even though some of it is her fault). This makes her an obvious Gemini. Through outside forces and self-sabotage, Jessi puts herself in tough spots, and always runs with what’s on her heart. She’s intense and romantic, but she can be chill and laid-back when she wants to be (come thru Gemini duality!). But no matter the drama, Gemini’s can find balance on even the shakiest of ground, and the chaos can prove quite fun.

Like many Cancer’s, Nick is loyal to his friends. No matter what they do to him, he typically forgives them, and things move ahead. You’re an original romantic, just like Nick, who can be run over by the cynics of the world around you. And while you might have a tendency to become self-centered when you’re in trouble, remember that it’s the people around you that can often aide in that trouble. Keep wearing your heart on your sleeve, Cancer, and don’t let the tough guys get to you.

Listen, Leo; you’re the star of the show. You don’t mind all eyes on you, and you’re happy to make a fool of yourself if it leads to a smile, laugh, or joy in the people around you. You’re not a natural giver, but you sacrifice for the people you deeply care about. You don’t mind chaos, mutiny, and adventure, although you’re often smart enough to keep yourself out of the driver’s seat, so as not to get caught. You’re more than meets the eye, Leo, with deeper connections than most of us give you credit for.

Virgo, you can be a tough cookie to crack. You’re a little mysterious, plenty independent, and overly caring. You’re not afraid to walk your own path; even if you’re alone. Always the trailblazer, you have no problem taking a stand against anything. You’re outspoken, but not obnoxious; a natural leader, without having to scream to be heard. Keep using your influence and voice for good, like Missy, and don’t be afraid to step out of line once in a while!

You are a balancing act, Libra. While you may not always be the center of attention, you’re able to corral the big personalities that surround you. Just like Andrew, without you in the group, things tend to fall apart. You’re equal parts logical and emotional, with the uncanny ability to use your head and your heart. You are often an ear for your friends’ problems, but you wouldn’t have it any other way. You love being able to help, but be careful to not get lost behind someone, Libra. You’re simultaneously our ‘mom friend’ and our ‘crunk friend’; and we can’t get enough of it.

Don’t look so surprised, Scorpio. You possess the same dark humor and relentless mystery that makes us love Maury so much! You’re an outsider sometimes, but you don’t really mind. You’re determined, cynical, and emotional; just like Maury. You really love what you do, and although you don’t open up often, you are able to connect deeply with people. You can get yourself into trouble with carelessness, but you love getting yourself out of trouble, so it’s rarely an issue. Keep bossing, Scorpio.

Sagittarius, you have the innate ability to disappear into the background or steal the show. There’s not really an in-between, but that’s never bothered you. You’re a fire sign, so passion and anger comes naturally, but unlike other fire signs, you seek to control your outbursts. You only let people see what you want them to see, and there’s still some that we don’t know about you. Like Gina, you’re a hard worker with a no-nonsense attitude. You don’t play games with people, but they always seem to want to play them with you. Keep your head high, Sagittarius, and pay them no mind.

Like Matthew, you’re a straight-shooter, Capricorn. You’re fiercely intelligent and witty, but it’s often to cover up your own insecurities. Matthew hides behind his biting tone, until he finds out people genuinely care about him. You’re booked, busy, and busting with bands. You’re not afraid to flex on those around you, and you can’t help but garner attention.

It can’t come as a shock, Aquarius, that you’re the resident ‘weird kid’. You don’t pay attention to what others think of you, and it keeps you from dwelling on the negative aspects of life. People can be intimidated by you, but it’s just because they don’t know how big your heart is. You’re the original original, and you don’t accept the nuances of conformity. People may think you’re off-the-wall, but you wouldn’t change it for the world.

You’re easy to talk to, Pisces, and you’d happily give all for the people you love. Don’t doubt your own power and strength, although others may try to convince you otherwise. You’re a unique person, who can level with anybody. You’re naturally caregiving, and quick to forgive. You can be the loudest when you have to be, but that’s not very often. You enjoy being a helper, and kindness will never desert you, Pisces.