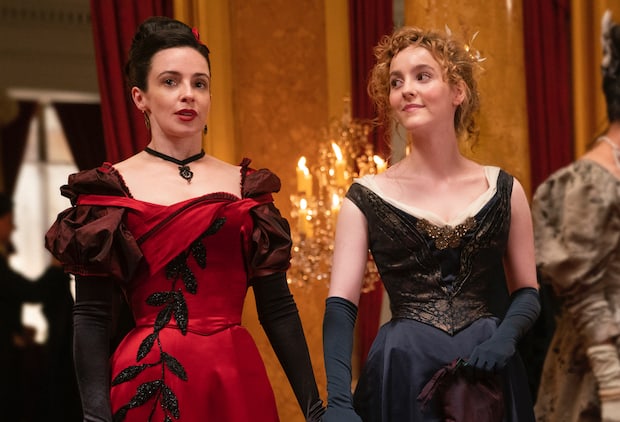 To start with, the title of The Nevers isn’t what the affected individuals in this particular story go by, since the metahumans, or ‘afflicted’ women that are being persecuted in the trailer don’t have a designed name, other than what they might be called by anyone within the story. But the nevers has to do with the idea that one should never be like this, which is a funny way to say that those elites that these individuals supposedly threaten had any choice in becoming what they were, when much like the X-Men and other characters in pop culture that have found themselves changed somehow, they didn’t really ask for said change, it just kind of happened. But so far the show looks like one that’s played out in the comics more than once but is taking place in a different time period than many are used to seeing it in. So far the show looks like it will be worth a watch since the overall effects and story appears to be something familiar, but with enough differences to it that it might be able to be entertaining, especially since there’s a question of who is on whose side. In situations such as this when it comes to pop culture the ruling elite is one of the worst enemies since they have money, means, and a serious bias against those that are simply trying to survive. In a way, it kind of sounds like the real world, but with far more action and less overall deliberation when it comes time to do something.

Right now the story looks like something that will attract viewers simply because it does look like another comic book creation with the onset of different abilities being displayed by several of the characters, but apart from that, it’s going to need a solid story to go by in order to keep people from turning it off. So far it does feel as though it might have something that people will enjoy given that a lot of flash and no substance is bound to kill off any interest. Action stories, particularly those with metahumans of some sort, usually do manage to gain the attention of people for long enough to determine if it’s going to be a worthwhile project, but people turn pretty quickly on a show when they figure that it’s not convincing enough to move past a first episode, let alone a first season. There’s a bit of cynicism in there just because it happens to be something created by Joss Whedon, though many would no doubt come to his defense citing that he’s created a few great ideas in the past. This is true, but he’s also been slipping in recent years according to some, so the idea that anything and everything he creates is going to be great is a fallible opinion, just like many.

The truth is that it does look as though The Nevers will be interesting to those that enjoy the time period, those that enjoy watching metahumans, and those that aren’t too keen on being given the whole story, but just enough that can keep things going. The desire for action movies featuring those with abilities that elevate them above normal humans have been on the rise for years now and the idea that such a thing is going to be popular for a while to come is fair to say since there are plenty of similar ideas coming out between the DC and MCU brands and it’s likely that many others are going to follow this lead when trying to come up with other ideas that will be able to compete or at least cash in on the level of interest that people have in these types of shows and movies. Considering the fact that Whedon has managed to generate ideas that people have found appealing in the past it’s likely that The Nevers is going to be something that we’ll be hearing more about in the weeks to come as it will release in April. But when it does come out it’s best to think that it might be under close scrutiny since even HBO might not keep everything just to make certain that they have enough material to remain competitive.

But from an initial trailer, it does appear that The Nevers could possibly be interesting enough to keep around for a while, though it will take more than the trailer to make this convincing and if there’s plenty more to come then it’s fair to say that it might very well become another popular show to follow. We’ll have to wait and see just what will happen, but giving the show the benefit of the doubt sounds like a good idea for now. If nothing else, the initial episodes should be fun to watch.