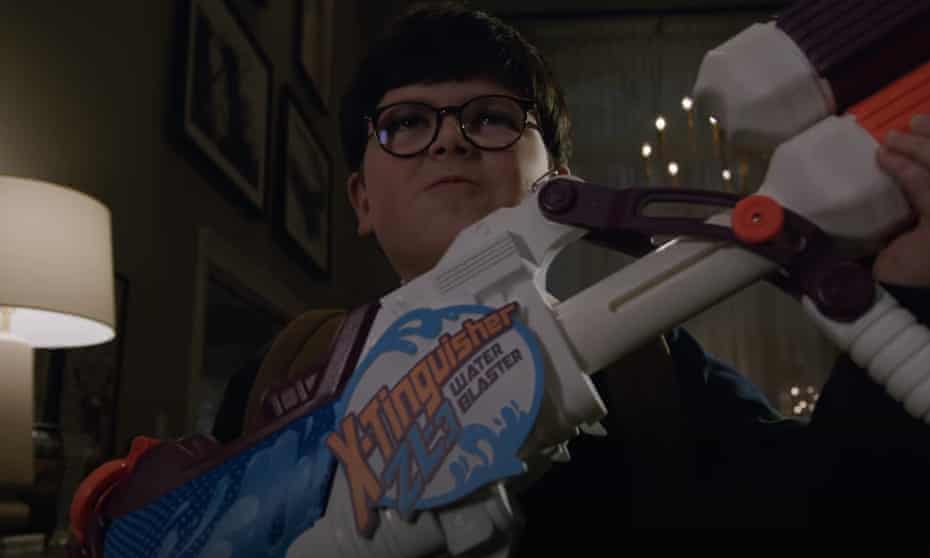 The first thing to note is that Kevin McAllister won’t apparently be showing up in this movie, according to the trailer at least. If he does then it would likely be a surprise that’s not being widely covered at the moment, but it would appear that Buzz McAllister will be showing up as a cop of all things. Doesn’t that just figure that a troublemaker would become a law enforcement officer? In any case, the young kid in the story, Max Mercer, is yet another kid that’s been left home and as the trailer shows is apparently fully ready to have a good time and defend his home in the only way that a kid might fully understand, by using everything at his disposal to dish out a maximum amount of pain. Right off the bat, let’s go ahead and say that it’s ironic how so many people have likened Kevin McAllister from the first two Home Alone movies to Jigsaw thanks to his traps and other methods of home defense, only to see Max employ other methods that are either similar or just as devastating.

Loading an air cannon with pool balls and firing them at a person from an elevated position isn’t quite the same as hurling a full can of paint at someone, in fact, it might even be worse given the fact that an air cannon can be lethal if fired at close range. Some folks might want to laugh at that, and if this thing was loaded with a miniature pillow or a bean bag I’d laugh along with you. But the kid is firing a pool ball, a compact sphere made of resin and plastic that’s capable of knocking teeth out at close range, WITHOUT as much added force. The paint cans in the first movie had gravity and their own weight working for them, but this thing that Max is holding in the trailer is a certified skull-breaker, but since it’s going to be a Disney+ movie, which I’ll be watching when it comes out in November, it’s just going to hurt, A LOT.

There’s no doubt that there are going to be several differences between this movie and the original since the difference in the kids is easy to see since Kevin McAllister was a whip-thin little kid that might have blown away in a strong wind, where Max is a pretty hefty kid that doesn’t go without much apparently and does appear to be insanely spoiled. Some people might want to say that I’m coming close to fat-shaming this kid, but the truth of it is that Kevin looked like the type of kid that was essentially the runt of the litter and didn’t get enough emotional support or even love from his way too large family, while just from a first glance Max already sounds like a seriously spoiled kid that might not get as much attention, but is a little too full of himself for his own good. That’s the first impression though, and it could easily change the moment that we get to watch the movie. What is also apparent is that Max is every bit as smart as Kevin, and definitely just as vindictive since he’s not about to take it easy on the burglars.

Another difference is that the burglars already appear to be kind of like a discount Marv and Harry since instead of two hardened criminals, the movie is featuring a married couple that, according to the synopsis, are there to take an heirloom that may or may not be theirs, or could be something that they’re willing to steal anyway. But from the looks of things they’re not bound to be any more successful than Harry and Marv since a kid with a big imagination and a lot of materials to work with, and a home to defend, is not someone to be trifled with in the movies. One thing that it feels likely that we can count on is that people are going to analyze the hell out of this movie and find out just why the burglars are so insanely dumb when they could easily overcome a kid and get what they came for. But that wouldn’t really be the point of the story, would it?

From the start, the feeling about anything to do with Home Alone and a remake or reboot or continuation (remember, Buzz is in this movie apparently) is enough to make one’s eyes roll as they wonder just when a new idea is going to come along. But the further one goes into the trailer it becomes easier to think that even if this does follow the original and deviate now and then, it could be worth watching just to see if it all comes together. It could be a fun movie, but we’ll have to wait and see.