Home
Movies
What Movies Get Wrong About Explosions 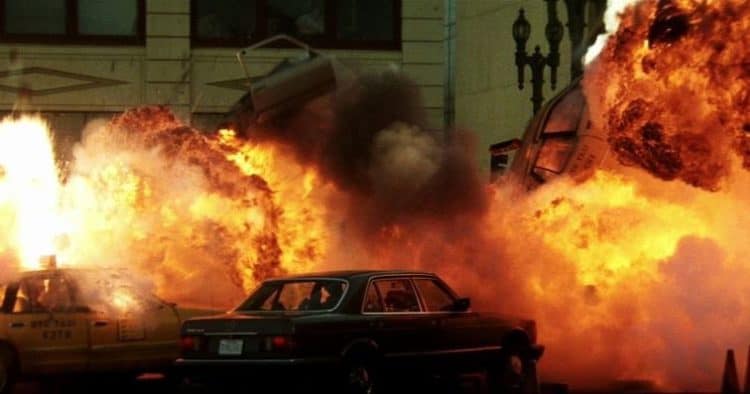 A lot of action movies will feature at least one or two, or a dozen or more, big explosions that will wow the audience and get them to think that what they’re seeing is how it happens and how explosives work. Some might be smart enough to not be fooled since there are those that understand how explosions work and that a lot of what’s seen in the movies is for effect and isn’t how things really go. But if explosions in the movies were more true to life it might be that a lot of movies wouldn’t be nearly as popular since the effects would fall flat and the story would have to take over and be far more impressive in order to make up for the lack. It’s true that explosions can work as they do in the movies, but only with a lot of help, meaning that to create the shock and awe someone would have to go above and beyond when creating a massive explosion, and thankfully that’s not always possible since it takes careful planning and setting something up in order to pull it off. While explosions in real life are terrifying, those in the movies are for entertainment and don’t always come off as realistic as the filmmakers would like people to believe.

Here are a few ways that the movies get explosions wrong.

5. A human being can take the shockwave from an explosion. From a distance, maybe, up close, no.

The shockwave produced by any explosion can be extremely harmful, and from bigger explosions, it can cause a great amount of damage to a human body since it can cause the kind of harm that might kill those that aren’t able to withstand the pressure. But in the movies we see people get up, dust themselves off, and head on their merry way again as though the shockwave was an unexpected shove that simply knocked them to the ground. Some movies have actually depicted this effect in a way that makes sense, but a lot of them make it appear as though a human being can be standing only a few feet away and suffer nothing other than temporary damage that will fade quickly.

4. Shrapnel from an explosion is minimal. Nope.

To be fair, it does depend on where the explosive device is located and how much of a barrier lies between an individual and the actual explosion. For instance, there’s a good chance that if a person has a few to several walls between themselves and the explosion, and a good deal of space, that they’ll be safe. But otherwise, in the open, anything can become shrapnel since the force of an explosion will throw whatever is nearby with enough force to easily puncture a human body even if one is wearing padded armor of some sort. And then again, one still has to worry about the shockwave. But shrapnel is rarely a problem in a lot of movies since many people don’t tend to suffer too badly unless it’s called for in the plot.

3. It takes a very small amount of explosives to level a building. It doesn’t work that way.

There are explosives that are more powerful than others, but even putting a small number of high explosives near the main support within a building isn’t going to be enough to topple it, unless the building is ready to come down with minimal force anyway. Of course, if that’s the case, then even walking into such a building would be a bad idea. The secondary damage that an explosion can cause would be the real danger that might compromise the stability of a building, while the initial blast might cause a lot of damage. Still, it typically won’t be enough to bring down a building on its own.

2. The fire and smoke are standard sights in an explosion. With plenty of fuel added in, sure, otherwise nope.

An explosion isn’t usually a big boom and whoosh of air that we see in the movies as a fireball erupts from out of nowhere since it’s usually much simpler and doesn’t have as much fanfare. But using enough fuel can produce the big, explosive feel that comes with the fire and destruction that people are so thrilled to see. In a real explosion though it’s over and done pretty quick, and if there is secondary damage then it might take on this form, but typically one won’t see this kind of thing with a carefully maintained explosion.

1. It’s easy to place a charge for maximum damage. You can’t just slap a block of C4 on something and expect a result.

People that know what they’re doing with explosives, due to the time and training put in over the years, would likely tell you that just slapping a block of explosives on something and expecting it to decimate what it’s supposed to isn’t going to be a sure thing. It tends to depend on what kind of explosive is being used and how it needs to be adhered to an object to achieve the desired goal since otherwise it could be a big bang without much damage.

Explosions are definitely impressive on-screen, but they’re not always realistic.