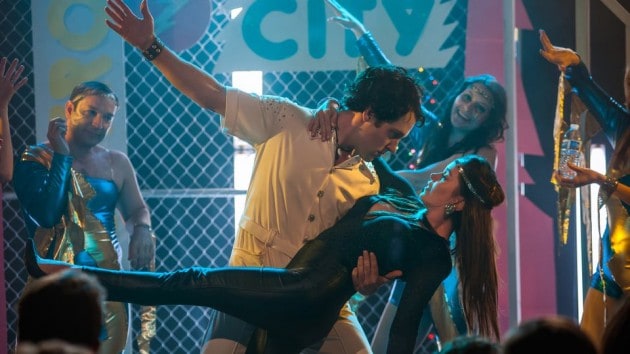 Anchored by the meteoric rise and fall of ‘slip and fall’ lawyer Jim Stansel, “Dinner” and “Electro-City” are almost a mini-play of their own within Wet Hot American Summer: First Day of Camp, “Dinner” representing the romance and seduction of many characters, and “Electro-City” testing the bonds that form (another wonderful example of the show’s hyper-accelerated emotional timeline, while the physical one crawls along). As the camp moves from afternoon to night, the myriad of plots are beginning to find some unity – mostly revolving around the horny nature of teenagers, which pushes the story forward in the most logical ways possible.

I really love how elastic First Day of Camp is with its many stories. Its ability to not truly have an A, B, C story structure is impressive, especially considering how much its juggling – in terms of narrative and comedy –  in any given scene. It’s completely wiling to dump a couple big storylines in these middle episodes without a second glance. Most shows would be content to let the toxic ooze and Electro-City stories play out for the entire season, where First Day at Camp pushes through them, using those stories as jumping off points for its little romantic asides, be it between Katie and Andy (“I’m going to fart my way into that snatch”), Greg and Beth, Gail and Jeff, or the impending love between lonely Gene and his unsuspecting kitchen appliances.

As expected, these stories continue to pour on the homages to every single genre of ’80s film. However, it’s the decision to use two stages – the courtroom and the theater stage – as the centerpieces of these two episodes that really makes this episode something more than a series of extremely well-crafted parodies. Of the many emotions depicted in performance (musical or theatrical), love is always the most outlandish, passionate, and utterly convoluted, so it makes sense both “Dinner” and “Electro-City” would use these setting both as dramatic centerpieces, and as locations where major stories from First Day of Camp provide an avenue to explore characters and what they love (for Claude Dumet, it’s underage camp counselors… for Beth, it’s a man who is now a can of vegetables), while still retaining the hyper-energetic alternate reality First Day of Camp takes place in.

Most of all, “Dinner and “Electro-City” both work because they’re probably the funniest episodes yet. Images like an unshaven Michael Cera striking a noir detective pose while looking out his cheap office window are the very things that define Wet Hot American Summer for its fans, and both of these episodes have moments like those in droves, neatly delineating between the two episodes by structuring the former around infatuation and discovery, and the latter around what happens when that ends, when reality and dissonant emotions come into play (just look at Dumet and Susie: she’s in love with him until she realizes she’s 16, which makes him creepy).

See, while First Day of Camp loves its parodies, its wholehearted commitment to the saccharine emotions underneath them is what catalyzes its emotional connection to its audience. Is it not satisfying to see Gail crack a smile when Jeff proposes to her – or by the same token, how heartbreaking it is to see Jonas truly become Gene again? Knowing where these stories are eventually headed makes plot development an intriguing watch; seeing how First Day of Camp ultimately embraces the hope, wonder, and innocence that everything it makes fun of builds the bridge from satire to emotionally resonant comedy.

That balance is tough to find. The film itself loses it in the second half as its allegiances to homage becomes more important than the characters themselves. First Day of Camp is constructed in a very different light, as similar as it may feel in most scenes; there’s a genuine beating heart at the center of Camp Firewood, both for the material it lampoons, and the characters who’ve inhabited it across two decades – underneath all the fart jokes and musical nods, it’s hard not to see and feel that heart in First Day of Camp, which makes the fantastic material supporting those themes even more fun to watch.

– Love the scene where Victor hides from Gene. What a classic ’80s (and ’90s) trope, especially in goofy family comedies.

– “When you point a finger at someone, there’s three pointing back at you.” #lame

– Jim Stansel demands that his assistant holds all his calls: he informs her by pressing the intercom button on his desk phone – except there’s no button or phone, and he’s just yelling at his desk.

– “This will be the biggest scandal since Watergate…which was about seven years ago.”

– Of course Gail has a large Amish family.

– Nobody wants to be the turd wheel… except Cooperberg, whose costume grows more and more ridiculous with each episode.

– “What did I tell you about digging in the trash?”

– Xenstar lawyers have iPhones… and The Falcon has really good aim with a sniper rifle in broad daylight. 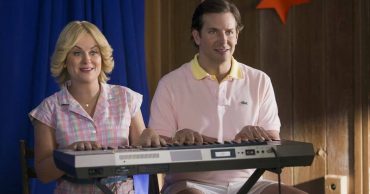 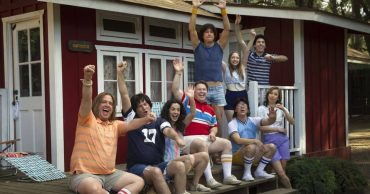