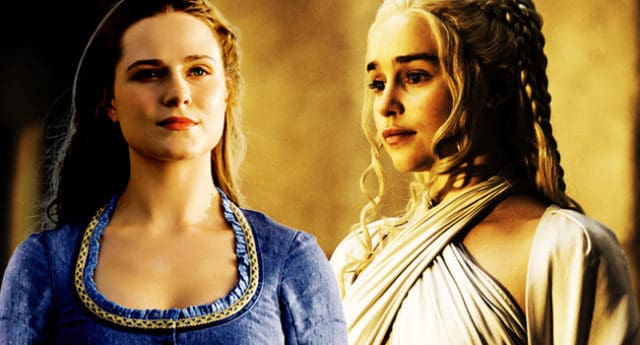 Two of HBO’s current hits, Game of Thrones and Westworld, seem to have more in common than we think. Of course they’re both big spenders and moneymakers, with big ensemble casts and even bigger storylines. They’re both about power struggles that result to the ultimate violence of war. We get all of that. But for a second, let’s put both the shows’ main revolutionary figures side by side. Dolores and Daenerys, both three-syllable names that start with the letter D, are the blonde heroines of both shows. After thoughtful consideration, we realized how alike these two characters really are.

Starting with where they came from, both Dolores and Daenerys were naÃ¯ve and innocent at one point. They were both shy and quiet and were both some kind of prisoner in their own situations. Dolores was a robot that didn’t know she was a robot. Danaerys, on the other hand, was just an ousted princess that was stuck with her crazy and annoying brother (that’s prison enough). Both of these characters eventually learned their place in the world after a turn of events. Dolores learned much through talking to the people that created her, while Danaerys had to fend for her own after Drogo died. Danaerys literally stepped into the fire and came out changed and with a vengeance.

Eventually, both characters also rose to power. Dolores became leader of the robot army, while Danaerys became leader of a few different armies. They both used murder as a vessel to get to the top. While Dolores did that by killing a few Delos executives, Danaerys climbed her way by killing many that stood in her way including a lot of Khals and Lannister followers. They both want take over the world and are working towards doing so–Dolores, while on a horse, and Daenerys, while on a dragon.

Let’s talk about love and how these two female characters have similar interests. Dolores has Teddy, a sweet cowboy who has cheated death. Daenerys has Jon Snow, another sweet lad who has also cheated death. Both Teddy and Snow thought they were the heroes of each of the stories. And while they both may play the hero role in the grand scheme of things, they’re probably still going to be shadowed by their larger than life counterparts and lovers. Both of these love stories have some weirdness to them as well. Dolores and Teddy are both robots to begin with; that’s really enough said of that. And Daenerys and Jon Snow are just kind of related; that’s more than weird, really.

It’s all clearer now, but why these two are so similar is lost to us. Perhaps HBO is just capitalizing on the appeal of the female heroine. Perhaps there’s more to it than we know. We should see more similarities between these two characters in the future. Let’s just say that if Daenery’s somehow ends up dead by the close of Game of Thrones’ final season, we’ll know exactly what’ll happen to Dolores one day.