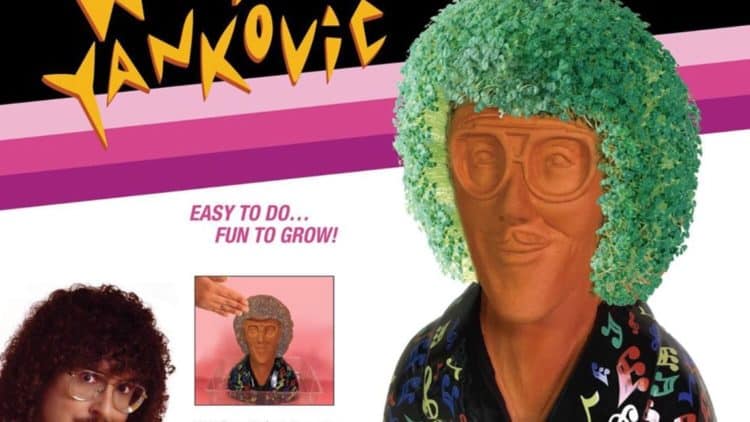 It’s hard to know if Joey Paur of GeekTyrant is excited for the Weird Al Yankovic Chia pet, or if he’s just sounding off like a lot of people are about this new and somehow kind of strange decoration that in June will join the long line of Chia heads that have been modeled after various famous individuals. It’s definitely a different type of immortality that a few stars have gained throughout the years since Chia pets are still, somehow, kind of popular among certain crowds and there are actually those people that might think about making a whole garden out of them. The might be kind of awkward don’t you think? The idea of walking into or past someone’s garden and seeing various Chia heads staring out at you is kind of unnerving really, but maybe that’s a personal thing. Some folks love Chia pets and have been buying them for years since they came out in the late 70s. The first actual Chia pet was a Chia Guy that wasn’t too much different than the Chia pets you see today since the formula really hasn’t changed. The form has definitely changed over the years since more and more ideas were developed for the terracotta figurines as the years went on. Starting in 1982 each wave started to introduce new Chia pets in different forms as the company continued to pump them out.

A lot of us grew up hearing the Chia pet commercial, Ch-Ch-Ch-Chia!, and can probably remember a good number of the different models that were rolled out in order to satisfy some strange gardening need that people had. But it wasn’t until the 2000s that celebrity heads started showing up since in 2000 Mr. T. and a few Looney Tunes characters got the treatment. From then on it was pretty normal to see one celebrity or more getting a Chia head in their likeness and amazingly enough people still buy these since they’re nice showpieces that stand out in a way. Granted, it’s not something that everyone is going to look at and say “I want one”, but for those that love the strange and the trendy this is actually something that might fit in their home and blend right in with whatever other items they might have. If anyone remembers Chia did a series on the Duck Dynasty stars as well and the products sold fairly well apparently. Kirstin Fawcett of Mental Floss has more to tell about Chia pets.

But Weird Al Yankovic is definitely someone that a lot of people remember from the past since the parody king has been taking on various songs and re-creating them in his own manner as he’s been able to make people laugh throughout the years with hits such as Eat It or I’m Fat, or even Amish Paradise. There’s an idea that might have been interesting, if the terracotta figure could somehow be made in the likeness of his Amish parody character. Somehow though that feels as if it might offend too many people, as such a thing is all too easy these days. But if one looks back at the history of Weird Al’s music and his performances it’s hard to take anyone saying that he’s offensive seriously considering that everything he’s done is comedic and it doesn’t even matter if he’s brought politics into it a time or two since it’s still insanely funny given that he’s ripped into many people throughout his time as a celebrity. There are some songs and themes that he’s used that some might go so far as to say didn’t need to be touched or used in such a way, but then again when it comes to comedy there aren’t a lot of barriers that aren’t going to get knocked down eventually considering where comedy comes from and how it’s used in so many different ways.

It’s enough to wonder about people at times when it comes to what entertains us and why our many different tastes lean the way they do. Personally I think a Chia pet is just something that grows and then gets forgotten, but some people swear by them and happen to love and take care of them to make sure they sprout and stay looking nice. To each their own, right? Some folks collect certain items, some folks continually discover new trivia facts about movies and music, and some people collect Chia pets. It’s a strange hobby but oh well. If people enjoy it and want to spend their money on a terracotta head or animal that basically does the same thing that happens in a regular old flower pot then so be it. There is a bit of fun and amusing whimsy to a Chia pet to be certain, but it’s also enough to say that one really has to be into the whole thing to enjoy it. One might even say that about Weird Al Yankovic, but thankfully a lot of people, even if they agree, still find him funny.