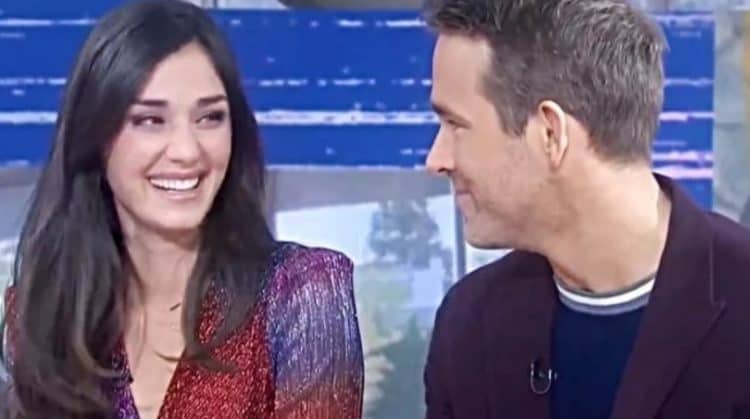 There are really times when people appear to NEED to be angry and ‘outraged’ about something, anything, no matter what it is, as long as they can make a stink about it. But an exercise bike? Really? The Peloton is an exercise bike, something that a husband might actually feel would be appreciated by his spouse when it’s gifted to her, not a comment on her weight and not a slam against fat people that need body positivity and affirmations to feel good about themselves. It wasn’t an attack of any sort on anyone, it was quite simply an ad for a product that some people might want to use, but huh boy, thanks to the era in which we live it doesn’t take much to offend anyone. It’s kind of interesting to think about how much those same people might feel like they’re about to explode after the gin commercial, but it’d be fun to see it happen. When the actress got the chance to meet Ryan Reynolds however it was even better since it really justified her placement in the gin ad and the fun it poked not so much at the Peloton ad but at the people that felt the need to explode about it.

Thankfully the gin commercial wasn’t meant as a slam so much as it was a gentle poke at people as if to say ‘are you okay?’ since it’s very possible that those that are fully willing to fly off the hook at a moment’s notice will often do so simply because they can and because there’s nothing else in their life if they’re not getting angry or offended by someone or something for absolutely no reason. Ryan Reynolds and his company need to be commended after that for taking her on and executing what’s really a subtle dig at the doubters and haters without going overboard or attempting to really slam the people that for one reason or another happen to think that a Peloton, or any exercise equipment perhaps, is in any way a derogatory dig against women.

Gary Thompson of The Philadelphia Inquirer takes the matter around the ballroom a few times and then some in his explanation as he attempts to remind people that nothing about the commercial is as it seems and that there are many markers within the ad that could be called out but seemingly aren’t since of course the whole issue of body shaming, ‘skinny shaming’ this time, is the main focus of so many people that might feel better if they turn their focus to another device that’s not showing the ad. Imagine if said people learned how to ignore what drives them nuts and forces their fingers to type in a staccato fashion upon phones, keyboards, and various other devices as they spew their ‘righteous’ anger upon those that they feel have wronged their precious sensibilities in some way that they can’t abide and won’t stand for goldarnit. Whew, had to take a breath after channeling my inner, temper-tantrum-throwing five-year old. Is that really how these people feel all the time? How exhausting.

As for the actress, she’s stated that it was likely her face that made a lot of people worry over it, and while that might seem unlikely it does sound like a feasible explanation once it’s broken down since the cast of her eyebrows do make her look a little worried. But if that’s all that others had to go off when they started their tirade…huh boy. Tashneem Nashrulla of Buzzfeed has more to say on this matter. There was a time when people didn’t get offended by the slightest little thing, wasn’t there? That part of childhood that some of us still remember when people didn’t tend to fly off in an impotent rage wasn’t a memory implanted by some evil corporate overlord, was it? I only ask since at this point folks like Ryan Reynolds are starting look like the normal folks while those that get so bent out of shape about everything are becoming the deviants that are what is wrong with the world in a big and very resounding way. It’s a miserable way to live if the most innocuous of things in the world tend to make you erupt into tirade of hateful and overly sarcastic remarks that have little to no real basis on what you’ve seen. Yeah, an exercise bike could possibly be taken the wrong way by some people as it might imply that ‘I don’t like you the way you are’ unless of course someone is simply acceding to your wishes of wanting to work out more and change up your lifestyle. In other words it’s more like saying ‘I know you want to be healthy and active and I want to help’. At least that’s what I got out of it.