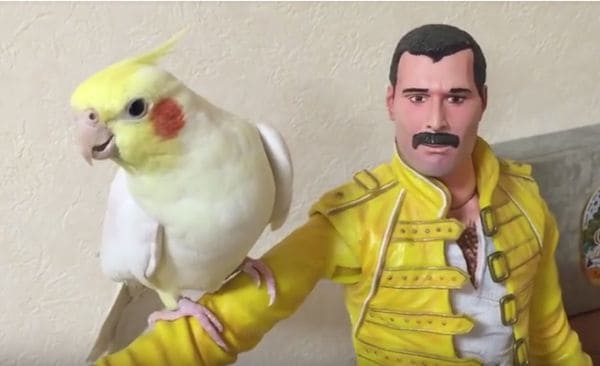 A cockatiel performing a medley of Queen songs seems like it would be one of the funniest things you might ever see. The medley isn’t really that long but it incorporates at least a couple of popular Queen songs such as Another One Bites The Dust and Radio Gaga. It might have been a lot more impressive had the bird been taught to whistle We Are the Champions or Bohemian Rhapsody. Those would have made any person’s eyes pop since it would indicate that the bird was a seriously impressive mimic. One thing you can say about this clip however is that someone really likes Queen if they have a statue like this in their home and have taught their pet how to whistle their songs.

Of course Queen is an easy band to like since they brought so many awesome songs to pop culture that are still around and are still used in a number of different shows and movies. Queen is a band that helped to form pop culture in a way that’s been very recognizable throughout the years. Whatever venue their songs are used in Queen has been represented in a respectful and awesome way that’s great to see and pays homage to one of the best in the business during their glory days.

As far as birds go however it takes a special kind of person to really enjoy having a bird in their home. They have some obvious pros and cons which usually depend on the species, the size, and the temperament of each individual bird. Some throw seeds, some are just downright mean, and then some are affectionate and very easy to train. Not being a bird person I usually steer away from them, but I’m still impressed when someone manages to train their pet bird to whistle certain tunes. ‘Train’ might not be the right word when it comes to birds, no matter that they tend to perform whatever action is desired if a person feeds them a treat as a reward. Training a bird seems more like a guessing game in which the person teaches them and then hopes that they’ll do what they ask if they’re given a snack. So yeah, maybe training does work, but it still doesn’t seem like the right word.

Those birds that do manage to do as they’ve been trained however are pretty cute and impressive when it comes to their range. It all depends on what they decide to mimic and what their owner decides to play around them. A lot of birds are pretty skilled at emulating noises and can produce two notes at the same time. Humans can do this as well but birds are born with this ability and tend to pick it up rather easily. This is a very interesting thing to hear if you ever get the chance.

In terms of this performance however it’s very accurate and indicates that the bird’s been exposed to a lot of Queen music. I wonder how long it took for the bird to pick this much up.