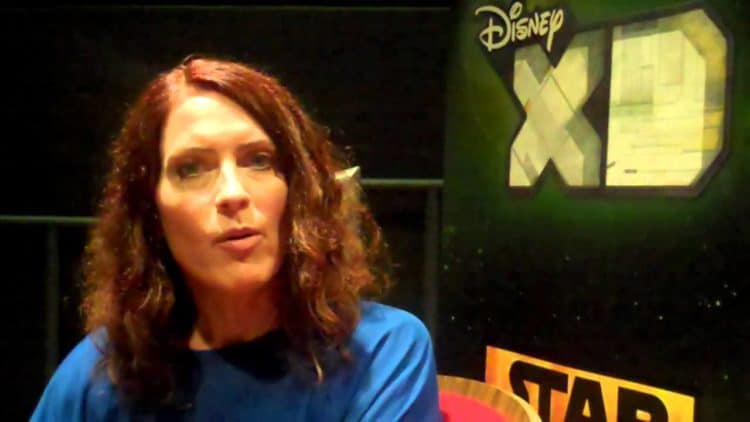 Vanessa Marshall currently stars as the lead in the fan-favorite series Star Wars: Rebels. Marshall plays Hera Syndulla, who is the captain of the ghost crew and a gifted pilot. The animated series has also gotten critical acclaim, earning nominations for multiple Annie Awards, a Daytime Emmy Award and, most recently the show won a 2018 Saturn Award for Best Animated Series on Television. Season 4 is now available for purchase on Blu-ray.

She also stars as the voice of Gamora on the hit Disney XD animated show Guardians of the Galaxy. Her character is the deadliest woman in the galaxy and is a member of the newly-formed Guardians of the Galaxy. She and the other members of the group are on a mission to try and obtain a powerful weapon known as the Cosmic Seed, using a mystical high-tech treasure map. The cast also includes Will Friedle as “Star Lord”, Kevin Michael Richardson as “Groot” and David Sobolov as “Drax the Destroyer.” The series, which has won two Behind the Voice Actors Awards and is in its third season. The highly anticipated second half of season 3 will premiere in 2019.

Here are 10 things you didn’t know about Vanessa Marshall

1. Vanessa Marshall is a sculptor. In fact, in high school, her mixed media sculpture “Prisoner of Adolescence” won top honors in an Otis Parsons Art Competition and was shown in both Los Angeles and New York City. Vanessa liked to take objects commonly seen as “trash” and re-contextualize them to produce “art.” She continued to pursue her artistic vision at Princeton University, where she won the Louis Sudler Prize for greatest creative contribution to the Princeton community.

2. Vanessa Marshall is a martial artist. She began studying Aikijutsu, Thai and French Kickboxing, as well as standard American boxing in 1999. Today, she enjoys training with a former MMA fighter. Not only did this discipline help her lose fifty pounds, but it has also given her an overall sense of self-confidence and empowerment. In addition, it has prepared her to portray various iconic female characters in the world of voice over (Wonder Woman, Black Widow, Poison Ivy, Black Canary, and Hera Syndulla). To see her latest work as “the deadliest woman in the galaxy” (Gamora from “The Guardians of the Galaxy” on Disney XD)

3.Vanessa Marshall is a published writer. Over the years, she has performed in several Personal Essay shows in Los Angeles (similar to The Moth). Her favorite essay “Fresh Step” was published in Ana David’s book, “True Tales of Love and Lust”, a collection of essays performed at Ana David’s storytelling show by the same name.

5. Vanessa Marshall is a massive New York Giants fan. Every year, she tries to go to at least one game. She grew up going to Rams and Raider games with her father. However, when Vanessa went to college back East and Los Angeles was suddenly without a team, she fell in love with the NY Giants. Vanessa actually wanted to be a professional quarterback, claiming that her “tight spiral” could rival anyone’s in the NFL.

6. Vanessa Marshall is a stand-up comic. She started doing stand-up after graduating from New York University TISCH School of the Arts with a Masters in Acting. Vanessa performed at Don’t Tell Mama in New York City, and when she returned to her hometown of Los Angeles, she worked with Mark Lonow at The Improv, and later became a regular in the Belly Room at The Comedy Store.

7. Vanessa Marshall is a huge fan of “Jane the Virgin.” So when she landed the role of the one and only Female Narrator for the 4th Season Premiere, she had a special fangirl moment.

9. Vanessa Marshal is a firm believer in giving back. There are several organizations that she is deeply committed to and has been for many years: Step Up Women’s Network, Women for Women, and Free Arts for Abused Children, and S.O.S. Children’s Villages.

10. Vanessa Marshall is an Anglophile. She studied acting at the National Youth Theater of Great Britainat age 14, and has been returning to the U.K. as often as possible ever since. She recently had her ancestry test done to reveal that she is in fact 84% British, and she couldn’t be more thrilled. Perhaps this explains her home’s interior design, which consists mostly of Union Jack pillows and pictures, as well as artwork celebrating all things in British culture.