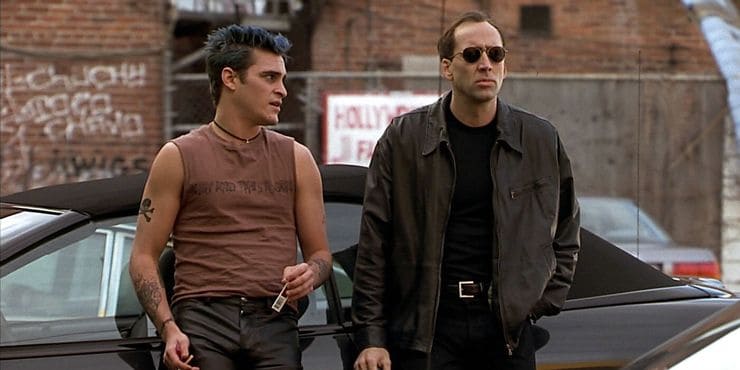 One thing that we’ve usually been able to depend on Nicolas Cage for is a fairly odd but somehow compelling story that’s told in a manner that might actually be kind of disturbing or have something to do with a touchy subject but is still something we’re bound to want to watch. 8mm is the story of a private investigator, Tom Welles, who is an expert at surveillance and intelligence gathering and has a nice, pleasing home life and a smoking habit his wife knows about but usually doesn’t say much about. In other words, it sounds like a life that’s well adjusted and isn’t meant to be disrupted in any way since his job pays the bills and he can sleep at night, for the most part. That changes quickly when he’s called into service by a wealthy widow, Mrs. Christian, who upon looking in her husband’s belongings found what she states is a young woman being murdered in cold blood on camera. Watching the 8mm movie reel, Tom is undeniably shocked and horrified to witness what looks like an actual murder, which would make this what is called a snuff film.

Snuff films are said to be a myth and a dirty one at that since there is a generally sexual nature about them, and that’s what is used for this movie. A snuff film is essentially a movie that depicts a person being killed or killing themselves, and this myth has been used a few times in the history of the movies. In 8mm, the snuff film is what drives the story as Tom attempts to find the young woman to start with, which is a daunting task in and of itself since the porn industry is a vast machine that tends to welcome people in by the thousands and only ends up awarding those that find a way to get past all the garbage that’s there to be found online and in the business itself.  After finding the girl during an exhaustive search of missing persons, Tom contacts her mother and anyone he can find who knew her and what she might have been doing in Los Angeles. The manner in which he goes searching is impressive since he checks everything from the company that made the film that the movie is printed on to the missing person files that number in the thousands. It’s actually kind of depressing to see the reality of how many people go missing in the US alone. But after finding out that she headed for LA, Tom makes his way to the west coast and starts looking around, even going so far as to speak to a rather scuzzy character named Eddie Poole, played by James Gandolfini, who has an obvious reaction to the girl’s picture but claims to have never seen her.

Obviously, Tom doesn’t believe him since he sets up surveillance in Eddie’s office and rents out an office space across the street from Eddie’s place of business so that he can keep track of what Eddie does and says. When he makes a threatening phone call to Eddie stating that he knows what he did, Eddie gets spooked and calls another number that Tom tracks down. During this time he meets Max, a porn store employee played by Joaquin Phoenix, who’s a likable musician that helps Tom navigate the hidden and illicit porn business that goes on behind the scenes. It’s here that the pair apparently find an actual snuff film for sale, only to find out that it’s an elaborate fake. Upon heading to New York, Tom and Max meet up with a pornographer by the name of Dino Velvet, played by Peter Stormare. After their meeting, which results in a commission taken by Dino at their request, things kind of go south. Not only was Dino alerted by Eddie, but he has his favored actor, a sadistic, masked man by the name of Machine, at the meeting as Tom is restrained, beaten, and given the revelation that the Christian’s lawyer had him under surveillance the entire time.

It’s at this moment that Dino takes the original film and destroys it, thereby erasing the girl, Marianne’s, existence almost entirely, since it was one of the last bits of evidence to say she ever existed.  Things take a definite twist as Machine kills Max, who was taken captive at an earlier point, and Dino and Eddie turn on the lawyer, who’s shot in the chest by Dino, with a crossbow bolt no less, before taking a bullet in the neck. Tom frees himself after stabbing Machine in the stomach and threatening to shoot Eddie, who attempts to chase after Tom after retrieving his own gun. The soundtrack and the feel of the movie at this point are so frantic that one can’t help but feel their own heartbeat pick up. And the funny thing is that this isn’t the end of the movie since Tom goes back, kills Eddie, kills Machine, and at the end of the movie is a very different person, as he’s seen the darkness that lies just beneath the surface of humanity, and it’s changed him for good. In other words, this movie is a good way to remind yourself that humans aren’t perfect, far from it, and some are that way by choice.