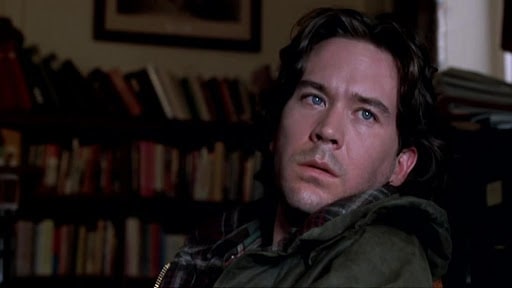 This is one of those movies that a lot of writers should be able to appreciate since it has a lot to do with being an author and the madness that can grip those that practice the written word from time to time. That might sound a little too melodramatic, but once you start down this path it’s hard to stop sometimes, and fiction writing is perhaps one of the more addictive ways to give in to the madness since between the ideas that pop into your head and the paths we take to follow them to their endpoint, it’s sometimes hard not to feel the need to drink to drown out the nightmares that can come. This story is one of those that make a point of pushing that idea since it starts out when Thad Beaumont is just a boy and is dealing with massive headaches that turn out to be caused by a tumor growing inside his brain. The truly strange part of this is that the tumor is actually the remains of an unborn twin that was absorbed in the womb.

After a successful surgery, the parts are removed, and eventually, as he grows older the rise of Thad’s writing career grants him a great deal of fame, but his decision to write under the pseudonym of George Stark becomes a huge mistake after a while as strange things begin to happen as the grave that he left the name of Stark in is found desecrated, as it looks as though someone dug their way out. When people that Thad has been associated with begin to turn up murdered, Thad begins to receive messages from Stark as the link between them strengthens. Eventually Stark tracks Thad down, and by the time he does it is obvious that Stark is falling to pieces as whatever force was keeping him together is no longer in effect, as George is beginning to rot.

Upon demanding that Thad write a book that will cement his place in the real world, the effect begins to take hold as Stark and Thad continue to write. But as this happens, Thad begins to weaken while Stark starts gaining strength. The odd and disquieting part about this is that during the headaches he received as a child, it was seen that a flock of sparrows were usually nearby, and as Thad and Stark begin to write, the movie shows another flock of tremendous size building outside the house. Eventually, the sparrows, who are seen as agents of Death, begin to press their way into the house, finding every nook and cranny that they can use, to flock around Stark, to carry him to the land of the dead as one might reason, as he has no earthly business being in the world of the living. In the book, one finds out that Stark was dead and gone before Thad started to write under the pseudonym, which is when Stark began to gain the strength to make his way into the material world. It’s a creepy story that has a lot of promise, but it didn’t exactly do that well at the box office for some reason.

The truth is that it wasn’t executed quite as well as it could have been, though it did have more promise than other movies based on stories by Stephen King, since it followed the book fairly well for a good portion of the time, and only deviated a bit here and there. But somehow, perhaps because of the limited effects or how the screenplay was written, it did fall a little flat. What was great is that Timothy Hutton turned out to be the right guy for the role since the madness he had to bring to bear was easy to see and it was something that was nice to witness in a movie such as this since it really conveyed the fact that his mind was going to another place and that he wasn’t in full control of himself at times. As Stark, he was a very mean-spirited individual that wanted to live in the real world and cause as much havoc as possible, and at one point it was easy to think that Stark might have overcome Thad.

In terms of acting this movie was actually enjoyable and not at all lacking in talent. But again, other factors came into play when it came to the lack of success that kept this movie from being one of the better Stephen King adaptations. It was actually said to be more of a curious psychological thriller than a horror movie, which is kind of fair, but all in all, it was still a fun movie to watch, especially after reading the book, which was, as you can imagine, still far better.