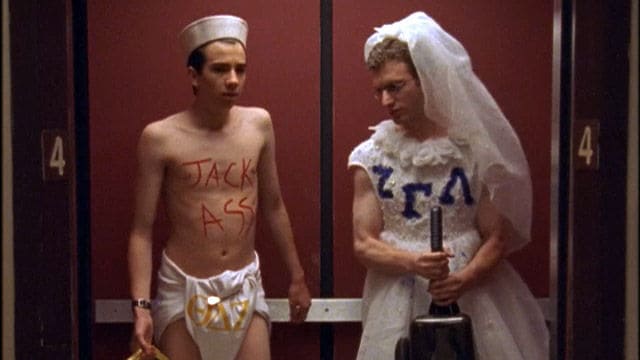 Never has a pickle been such an important dramatic device as it is in “Hell Week,” the conclusion to Undeclared‘s only two-parter. Tasked with reuniting Steve with his dorm mates, “Hell Week” is short on the reconciliation and long on the vengeance, a half-hour of pranking, mixed in with a funny, though oddly neutered story about the infamous “freshman 15.” While none of this is consistently funny as the previous part, Undeclared‘s ability to mix the disturbing and unsettling, with the empathetic and hilarious, provides a great avenue to explore the true difference between “friendship” and the ‘brotherhood’ Greek life offers (or in the case of the Little Sisters, just straight worship).

Despite it lacking the same emotional punch of the previous episode, “Hell Week” does employ a big of its signature darkness in Books, who is revealed to be a much more pathetic character than the villain we were presented with last week. Turns out Books (probably egged on by Beat Whore, Asshair, Taint, and/or Totem Pole, his frat mates) ate so many pickles he had to go to the hospital, and found himself power-hungry at his position atop the fraternity. His character is really the only piece of “Hell Week” that retains the worldview of its previous episode, quickly moving away from the external conflict between friends, and the deep, internal dissonance fraternity culture can offer, a misleading attempt at fostering brotherhood that can often lead to misplaced spite and self-hatred manifested as a “necessary” cruelty – because remember, only tough guys get to be brothers with other tough guys.

Again, the critique of student-led Greek life is abundantly poignant, revealing Books’ cruelty to be a massive overcompensation for assumed masculinity, driven by feelings of incompetence and elevated by his position of power. Even that position of power is a superficial one, though: Beast Whore reveals Books was only put in charge because him and Asshair didn’t want to deal with the paperwork, giving more voice to the angry, bitter young male whose familiarity with rejection morphed him into something much more sinister when given power (for all intents and purposes, he’s a very light parody, Undeclared‘s George W. Bush).

That conflict is really the one thematic piece connecting the two episodes; the rest of “Hell Week” is pretty light, detailing the back-and-forth battle between the Zetas and Steve’s friends, who share a great scene featuring Ron and Marshall making very uncomfortable realizations about their living situations. It even goes light on its B-story, where Lizzie and Tina find themselves tasked with getting a stressed Rachel to stop eating so much: it’s played for simple jokes so much in the early-going, it feels odd when the episode suddenly takes a nasty turn, detailing Lizzie’s apparent battle with bulimia (whaaaat?), and Rachel’s body issues, which manifest with all the nasty insults she throws Tina’s way. The thin parallel of misguided forms of punishment doesn’t quite hold up, given how wildly different and inconsequential Rachel’s brief plight is compared to Steven’s, whose story takes up two episodes, and exposes a major rift in the budding friendships between Ron, Marshall, Steven, and Lloyd.

Rachel’s story is still funny – her snapping out of it when the nerds start thinking they can hit on her is disturbingly superficial, but also hilarious – and in the end, Steve’s story works nicely to re-align him with the guys who spend so much time gleefully picking on him. Every group needs someone to bust on – but through the lens of frat life, Steven (and his friends) learn the importance between ribbing and bullying, something Books’ character sadly never had a chance to learn (and since he’s hailed as a hero after getting their burned Theta symbol back, never will), which gives us the kind of endearing, though slightly unsettling conclusion that Undeclared often sought.