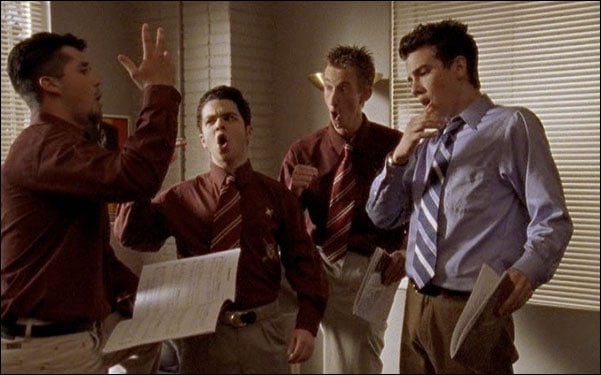 Fraternity life – or “Greek life”, as most refer to it – is a weird, weird thing. Somewhere between a social club and a cult, fraternities lure freshmen in with the spoils of popularity, then throw them into a drunken boot camp to reshape them into “better” versions of themselves. And it takes on different forms, whether at state colleges or Ivy League schools, but always under the same pretense: an air of exclusion, this belief that a handful of Greek symbols and some similar uniforms foster life-long friendships that place them on some other, more enlightened plane of existence.

“Rush and Pledge” is Undeclared‘s long, unflinching look at Greek life, enlisting a number of Freaks and Geeks alum to create Undeclared‘s first sustained conflict within the group. For freshman randomly roomed together, the Undeclared crews have enjoyed a surprising amount of compassion and friendship in the first ten episodes – but from the beginning, “Rush and Pledge” is absent of that. Everyone’s being a little more cruel than usual to Steve (who as the skinniest kid with the thinnest skin, will always be the one people rag on), and when the spoils of Greek life are presented to him by Hal’s friend Dingleberry, and Dingleberry’s son, Books, the head of Theta Delta Zeta, it’s the perfect set of circumstances to push Steven to find a new group of friends – after all, isn’t college about exploration and discovery?

The courtship of “Rush and Pledge” is always tinged with some ugly underside that both Steven and Lizzie miss: the faux compliments, the sky-high promises that are obviously too good to be true, and of course, the $300 a semester it costs to be in the fraternity, which Marshall is told is paid back in “parties and chicks,” an ROI even a terrible investor like Marshall (RIP The Wad) realizes is a raw deal. But disillusioned by his inability to handle his friends’ ribbing, Steven doesn’t notice any of these things, and finds himself pulled into the paintball games and promises from Little Sisters to party with him, and slowly, begins to adopt the uptight, chant-shouting persona of his new “brothers.”

One of the understated ideas in “Rush and Pledge” is the search for identity: as much as Steven is trying to escape the ridicule he faces over his video-wrestling skills (and doesn’t want to hear jokes about Lizzie), his journey in this two-parter is about trying on a new identity. He’s tried (and failed) at being the ladies’ man and the religious kid; this week, it’s Greek life, the next step in the personal development of Steven Karp. Becoming an adult means learning who you are, and the first handful of those identities are guaranteed to be tossed aside, simply another experiment in self-discovery that Steven will most certainly regret, at least in the short-term.

The other strong tenant of “Rush and Pledge” is the real brotherhood Steven has. While his suite mates might pick on him, he’s their Steven, and someone they’ve come deeply to care about, realize it or not. He helps maintain balance in the group, lest things become too cruel when three guys skilled in the sarcastic arts have nowhere to deflect their immature displays of masculinity; he’s the good one of the bunch, which sends the guys after Steve to save him – which ends up with the three of them covered in milk outside the frat house, as they watch Steven get his pin and appear to be happy with his new life. He’s been courted by the dark side – and in the end, is revealed to be the much darker side, proving that while Ron, Marshall, and Lloyd certainly picked on him a little too much, it was nothing related to the hell of servitude that awaits a pledge who must serve the Son of Dingleberry.

If there’s any weakness to “Rush and Pledge,” it’s how Lizzie becomes an accessory to this story: there’s no conflict between her and Rachel to push her to the sorority (meanwhile, Rachel and Tina fight over “How Bizarre,” a boring story about sharing space with a stranger in college). Lizzie just kind of wanders in there, mildly attracted to the allure of having a group of giggly sisters – is that something Lizzie wanted before? There isn’t a whole lot of basis in Lizzie’s character as to why she’d want to be in a sorority, and it makes her feel like she was pulled into the orbit of the sorority, seduced by spoils we didn’t realize Lizzie wanted. Was she not satisfied with the female friends she had now? It’s not quite clear what is drawing Lizzie to the Little Sisters beyond the most superficial things, and it does make her arc a little less satisfying than Steven’s, especially because her dream doesn’t turn into a nightmare in the final seconds of the episode.

Undeclared‘s take on Greek life is undeniably harsh, a brash rejection of the bro culture (cult-ure, amirite?) fraternity life is often presented as. It feels a little more bitter than many of Undeclared‘s stories, but maybe it’s just the heightened testosterone of the story that drives the presentation of the frat brothers as soul-sucking slimeballs. Either way, it is a terrific first act to one of Undeclared‘s more interesting group conflicts – and of course, a heartwarming Freaks and Geeks reunion.

– The Cameo Watch explodes this week: Samm Levine, Steve Bannos, and Natasha Melnick from F&G have cameos, but that’s not all: Sarah Jane Morris of Brothers & Sisters, Kevin Christy of Masters of Sex, and Jeremy Howard of Breaking Bad all make early career cameos in this episode.

– Perry’s fear of the fraternity is silently summed up by the image of him driving away while the others get milk poured on them.