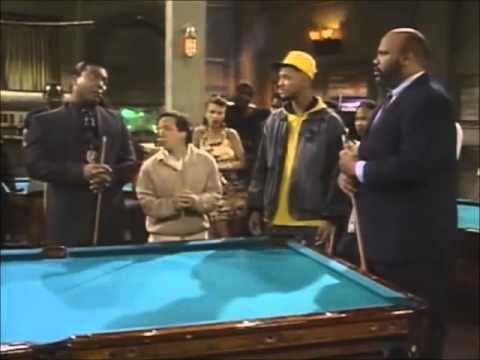 It’s hard to believe it’s been nearly 4 years since James Avery passed away.Â  Most affectionately known a Uncle Phil on The Fresh Prince of Bel Air, he was one of the better father figures in comedy sitcoms of the 90s and perhaps ever.Â Â  But of all the Phil and Will moments on the show, this is one of my favorites.Â Â  The episode is aptly called “The Hustler.”

Vivian goes to Berkley for the weekend leaving the kids behind with Phillip. Geoffrey is off duty so Hilary is left in charge of Carlton and Ashley. Will, however, is left in the care of Uncle Phil who forbids him to borrow the car, fearing that he will take it to some seedy pool hall. When he spots the keys unattended on the living room table, Will agrees with his conscience that he should go anyway. At the pool room, Will shows up nearly everybody in the joint with his mad skills, until he is spotted by a guy named Charlie Mack who challenges his game and his manhood (with more than a little encouragement from the fly honey who butters Will up).

However, when the game goes sour, Will is stuck for the $500 that he owes after Charlie reveals that he is a hustler. Will tells the him that he’s light on the cash, so the Charlie insists on the Benz as collateral. He goes home to get the money but his secret is revealed to Uncle Phil who insists on taking him back to the pool hall to get the money. At the pool hall, Charlie entices Phil into a game of which Phil quickly reveals that he knows nothing about.

He loses, but Charlie asks for another game at $100 a ball. Phil accepts and suddenly reveals himself to be a seasoned pro who beats the hustler without even trying. At home, Uncle Phil tells Will that he forbade him from going to the pool hall, not because he wanted to wreck his fun but because he knows first-hand what goes on there.