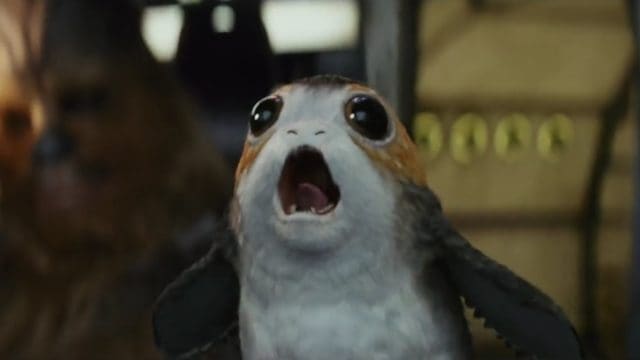 We’re now beginning the countdown to the release of Star Wars: The Last Jedi, and Twitter is exploding with noise just like always. Of course this time around the emotional content of the Twitterverse is seriously getting out of hand and there doesn’t seem to be any way of stopping it really. Did people ever get this emotional about The Empire Strikes Back? Nope, because nowadays the hug-happy oversensitive populace seems to cry about the darndest things and takes everything so seriously that movies are becoming another reason for people to have emotional breakdowns.

Can’t we just enjoy the movie?  Still though it’s kind of entertaining to see what the collective Twitterverse has to say about the new Star Wars: The Last Jedi trailer:

When you're forced to watch football so you can see #TheLastJedi trailer. pic.twitter.com/ClkuTRflGL

Oh no, not football! Tell you what Moldy, do what everyone else is doing and go on Facebook. At least there you can ignore the heavy sounds of the game and cry over absolutely nothing instead of the sound of fans having fun without you. Mmkay pumpkin?

Dear Star Wars, I'm not quite sure what this is but if you hurt/kill it, I will never watch your films again. #TheLastJedi pic.twitter.com/Yn6YAhoB7m

Oh sure, you get defensive about a creature that looks like a furry Pokemon but you’ll shrug your shoulders when Ewoks start raining from the trees like fuzzy body pillows. I don’t think the price of your ticket will hurt the movie at the box office.

All I can say is that a Porg made you go and see this movie….seek counseling.

My 7 yr old daughter loves the Porgs in #TheLastJedi trailer, not just cos they are cute but she is pleased that Chewie isn't lonely. Bless pic.twitter.com/Qet92Y4hq8

Kids are great aren’t they? I would imagine Chewie would get a little lonely without Han. Of course a Porg won’t be shouting at him to stabilize the fuel thrusters.

The Porgs from the new Star Wars capture both my emotions #TheLastJedi pic.twitter.com/R0CG6VS0gz

You need to get out a little more if these two emotions are all you’ve got in the bag.

Please for the love of all that’s holy and sacred do not, DO NOT compare anything from Star Wars to Pokemon, EVER-AGAIN.

Get-a-life. Yes Carrie Fisher is gone, yes she was awesome and a total boss in the last movie, but seriously, wipe your eyes and get over yourself.

I only know one truth
Leia Organa deserved better pic.twitter.com/tRq0oP3rwa

If Leia didn’t end up dying in this film, as you know she will, then who in the world do people think they would get to replace her? Not only would the CGI have to be on point for the next film but NO ONE could act the part like she could. Think people, think.

I’m just about speechless right now with the frequency of people speaking up about how sad Carrie Fisher’s passing was. It was a moment that the world lost a truly loved character and a great human being, but really folks, get a grip.

The imagery is very telling, and did no one happen to notice that we’ve already seen an image of Darth Vader in one of the trailers? So yes, there’s a good chance that he’ll show up, but more likely than not it’ll be in a flashback.

It could be a lot of foreshadowing, but there’s a chance that something Vader did or said will play a big role in this movie.

Yes they use a lot of the same imagery but really folks, Star Wars is very much into pomp and flash when it comes to their sets and scenes, so it could be what you’re thinking or it could be something entirely different set in a familiar way.

This movie is going to be off the chain, and with just the trailers and images to go on it’s enough to get a lot of people excited.

Some people tend to get a little TOO excited it seems, and something else that seems a little disturbing.