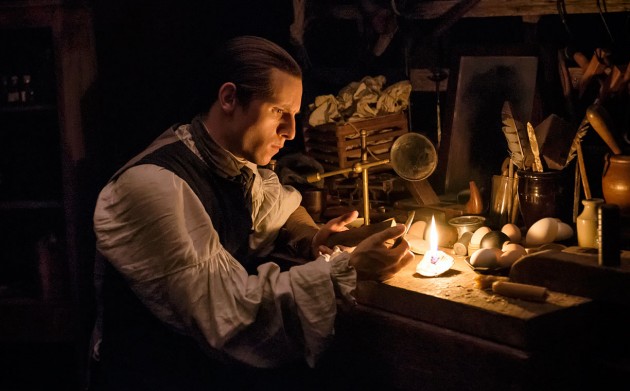 After nearly an entire year, Turn (now subtitled “Washington’s Spies”) has finally returned to our screens. The hiatus was long, but Turn quickly recaptures its momentum in its newest installments.

This week on Turn: Washington’s Spies: Abraham Woodhull declares his intent to go back and finish his legal studies, but his real intent is to gather intelligence. Abraham and Mary deal with the psychological consequences of the events of the Season 1 finale. Major Hewlett takes a liking to Anna Strong. Captain Simcoe is reassigned to Robert Rogers’ old post. Rogers is given a mission from the king. Ben, Caleb, and General Washington struggle to continue to fight the war, but are motivated by true hero Benedict Arnold (Owain Yeoman from The Mentalist). John Andre attempts to woo Peggy Shippen (Ksenia Solo of Lost Girl).

As you can see, there was quite a bit going on in the first two episodes of the new season. Our spies are more confident, the war is getting tougher, and things are changing around our characters. I was worried that a year’s hiatus would have me disinterested. I was wrong to worry. As strong as ever, Turn is comprised almost entirely of well-crafted dramatic moments. Every character in this large cast has a part to play in which they’re quite successful.

One struggle that Turn has always dealt with has been the pacing. Every story is interesting, but with such a large war and so many characters, the story can get bogged down. That said, after the first twenty minutes of saying “Oh no, they haven’t fixed their pacing issues,” I was drawn back in, and the show held my attention for the remaining hour and forty minutes. The end of last season showed growth in terms of pacing, and it seems like they have paid strong attention to that matter so far in Season 2.

My only real quibble? That their new subtitle is “Washington’s Spies.” but Washington was criminally underused. But, I digress.

The best part of this show? The acting. Quite a few of these actors are veteran, but the whole cast is made up of strong actors and actresses who bring their parts to life in a beautiful, meaningful way. Jamie Bell is a masterful lead. Woodhull’s quiet strength makes for a special kind of character. Some critics of the show say that it should be about Ben Tallmadge, but I disagree. Woodhull is masterfully portrayed by Bell, who captures every emotion that Woodhull is feeling, and radiates that onto the screen. The whole scene at the end of the second episode with the innkeeper and the egg? Intense!

I will go on way too long if I talk about every strong performance, but some of the others include Burn Gorman (Torchwood) as Major Hewlett and Samuel Roukin (Harry Potter and the Deathly Hallows, Part 1) as Captain John Simcoe. Gorman’s strength is not in his character’s strength, but rather in his weakness. Hewlett has fallen in love, believes everything Abraham Woodhull tells him, and just doesn’t seem to have the wherewithal to manage his town properly. Gorman, however, has captured a man who simply doesn’t belong in the time of war, which is why he’s guarding Setauket instead of fighting. Simcoe, on the other hand, was made for war. He would have no place in the time of peace. He’s an animal. At the beginning of the episode, when he was (essentially) caged and being taunted, I knew that it wouldn’t end well. Nobody who challenges Simcoe ends up particularly healthy, which certainly has me worried for our lead character.

All in all, Turn has returned to form. They’ve set up new, interesting stories with (mostly) the same cast of characters. I’m as riveted as I always have been, and I’m certainly excited to see where things go from here.

What did you guys think? Are you watching Turn? Let us know what you thought!